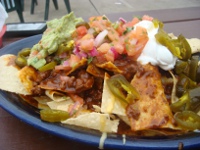 (I spent four days in Houston and thought I could pull off the Texas twang – until I realized I sounded more like a bad cartoon of Paula Deen than a Southern belle, so that’s the first and last y’all that you’ll here from me.)

It’s true what they say, everything IS bigger in Texas. Bigger roads, bigger cars, bigger houses, bigger steaks (of course), even bigger donuts. It was my first time visiting the cowboy state and I had a grand time.

My friends Sabs, Anika, and I decided to spend the the long weekend there to visit Sabs’s sister, her boyfriend, and their new baby. The weather there wasn’t as warm as I was hoping it would be, but it was still considerably warmer than the freezing temperatures in Boston! So it was a really nice get-away, very relaxing, with plenty of good food and great company.

On Saturday morning, we had big plans to visit one of the most popular attractions in Houston: 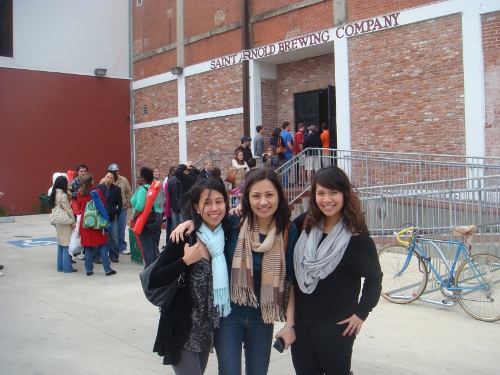 I’ve never been on a brewery tour and was really excited. Unfortunately, there was a two hour wait before we can get inside the Saint Arnold brewery! The people in line were already waiting for an hour and a half and most of them came prepared, with pizzas and other food items that they can munch on while waiting (and I think you can bring the food inside too). We didn’t want to wait for two hours so we decided to head somewhere else and get our beer fix at noon. (What, you’ve never had beer at noon? We’re on vacation, remember?) So we went to Cedar Creek instead: 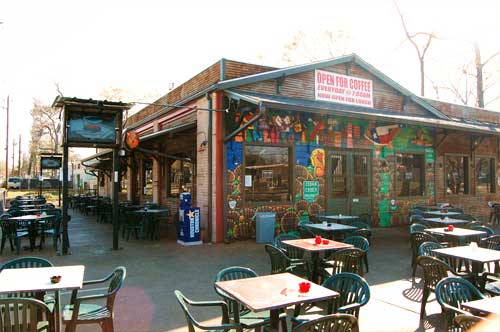 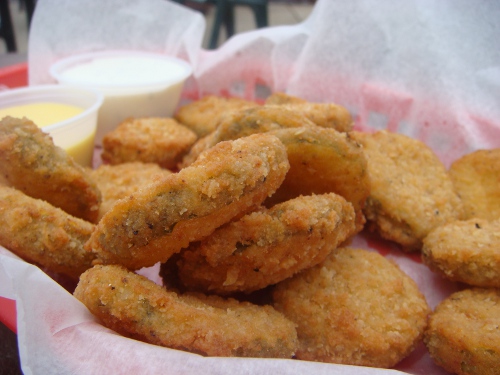 I tried a lot of fried things in Houston: fried pickles, fried okra, fried jalapenos (no fried chicken though, I had to exercise some self-control). All good, but these fried pickles were the best. 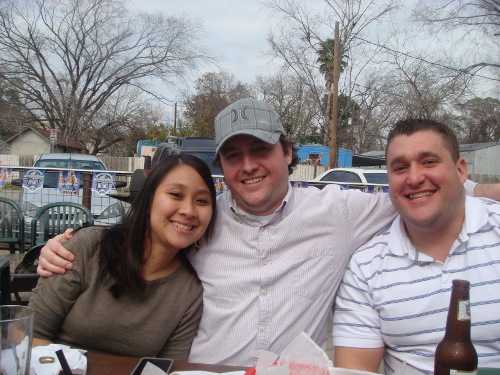 our hosts for the weekend Lei and Clayton, with their friend Bill 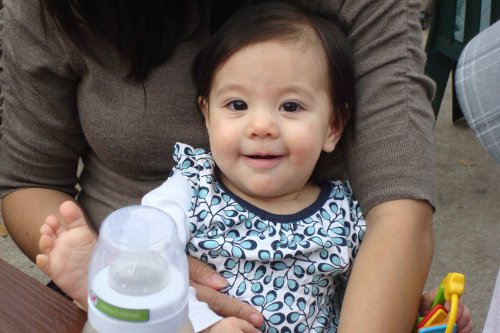 and this is Hanna, the cutest baby girl ever 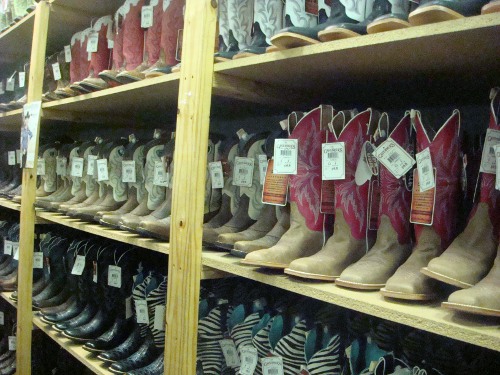 a trip to Texas is not complete without shopping for comboy boots, right? 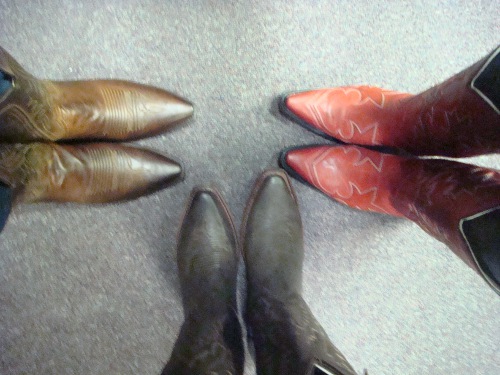 guess which pair I was mine

That night, we had a girls’ night dinner at Backstreet Cafe (no relation to the Backstreet Boys) which is one of the fancier restaurants in Houston and serves seasonal American cuisine. The place was beautiful, service was so warm, and the food was GLORIOUS. 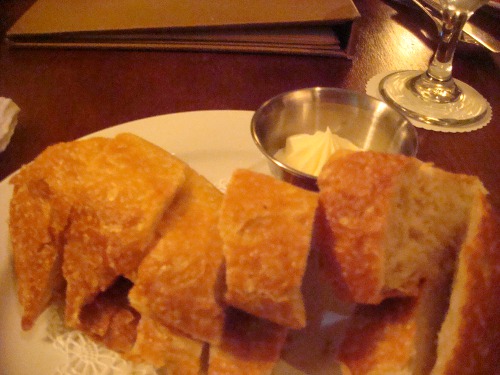 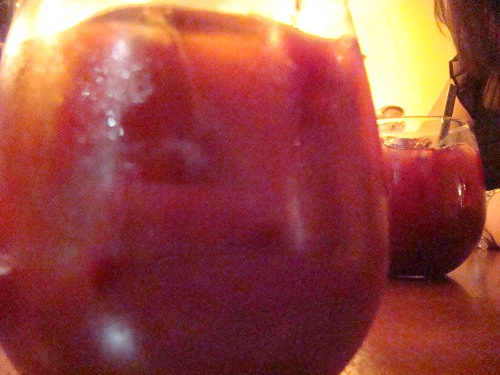 a couple glasses of sweet sangria 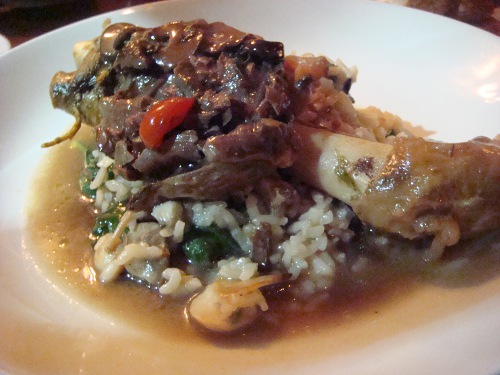 I had one of the night's specials: red-wine braised lamb shank with mushroom risotto and sauteed spinach

This was the epitome of a hearty winter meal: tender falling-off-the-bone meat, soft fragrant risotto, and garlicky spinach. Texas does its meat well, and this lamb shank was perfectly cooked. (And no, Andrew Zimmern, it wasn’t gamey). 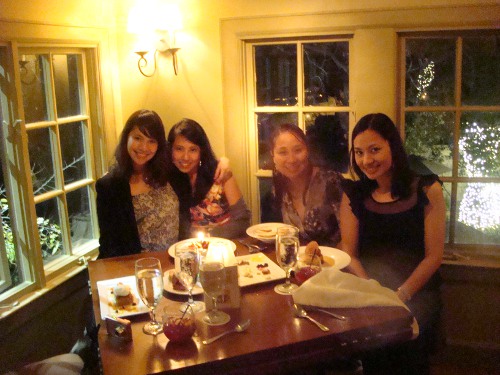 On Sunday, we went to Cyclone Anaya’s for a Mexican brunch: 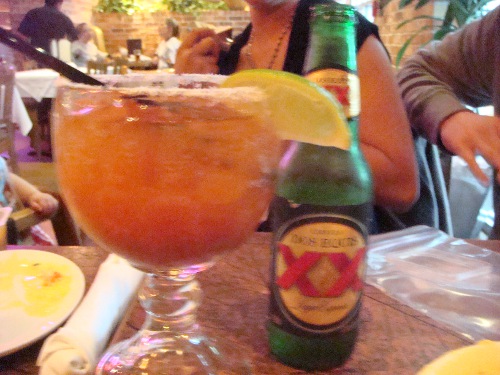 this is the XX Michelada, which is like the Mexican version of a bloody mary (but made with beer - XX lager - instead of vodka)

I didn’t order it because I don’t really like bloody mary’s. But I do like mimosas, in fact I like mimosas a lot, and had several glasses while I was in Houston (it was a vacation after all!) 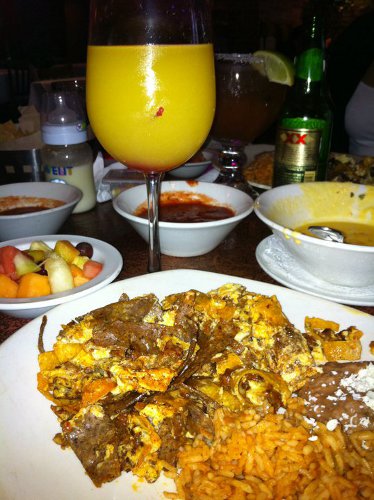 I know that plate looks pretty drab but there is nothing drab about migas con chorizo – scrambled eggs with crumbled chorizo and tortilla strips. It was actually a tad too salty but still very flavorful. The baby bottle and the beer bottle in the background both belong to Baby Hanna. 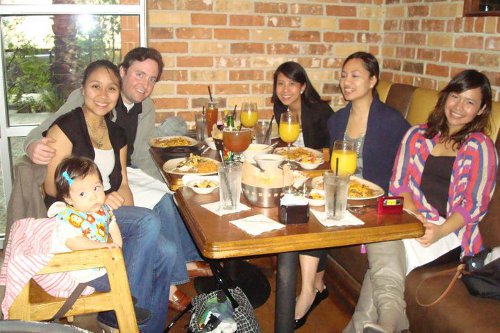 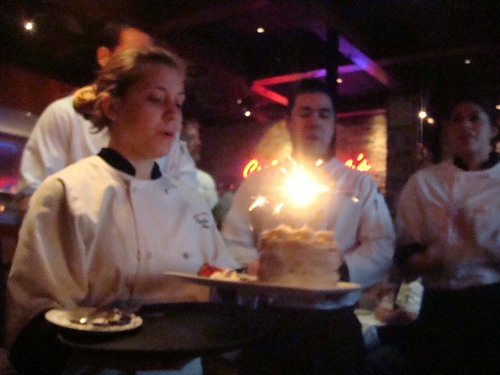 it was Anika's birthday weekend and the sweet staff at Cyclone Anaya's brought out a delicious tres leches cake!

We spent the rest of the rainy day driving around Houston, seeing downtown and all the big mansions, and the NASA Space Center. 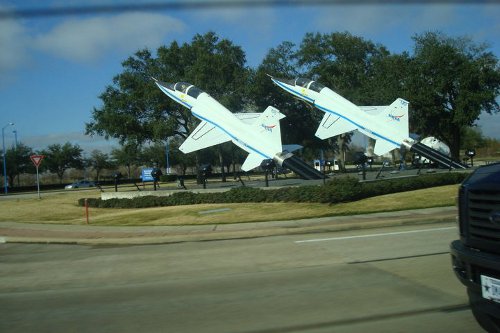 That night, after watching the Patriots lose before watching the Golden Globes, we went out for some good ole Cajun food at Mardi Gras Grill. We shared a couple of dishes: 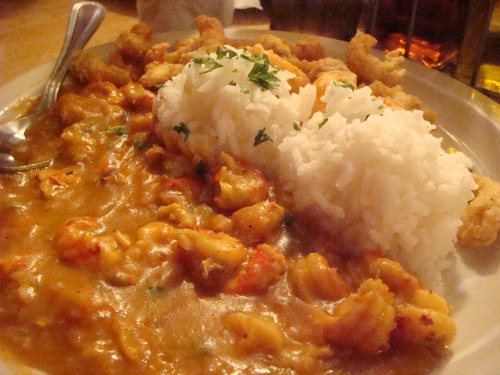 Crawfish Etoufee and Fried Crawfish Tails on the side

Southern/Cajun food is one cuisine I don’t get to eat a lot, so I’ve never even heard of etouffee before. Etoufee is a Cajun specialty which is a shellfish dish similar to gumbo. I could tell that the crawfish etoufee at Mardi Gras was slow-cooked, as all the flavors meld together wonderfully and the sauce was thick and rich. 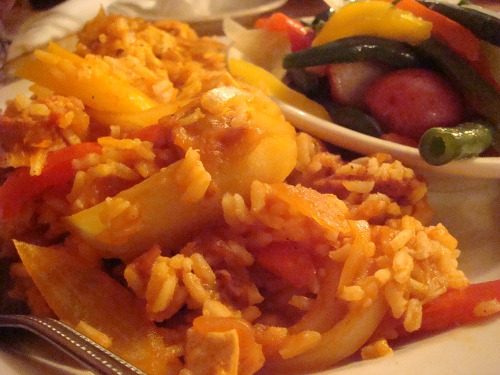 we also shared their famous chicken and sausage jambalaya

During our last day in Houston, we went to the Kemah Boardwalk, which was a fun destination filled with amusement park rides, game booths, and restaurants. I can imagine it being bustling during the summer, but most of the game booths were closed for the winter, and it was actually a pretty cold rainy day, so there weren’t a lot of people there. But we still managed to have some fun! 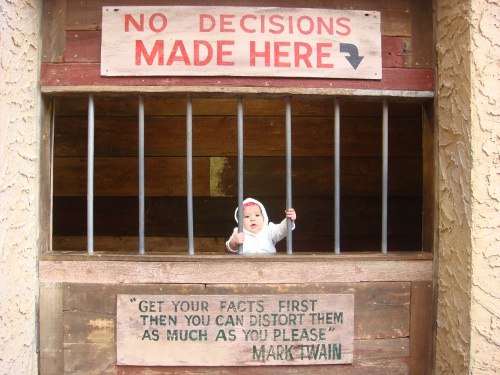 This picture is my favorite picture from our Houston trip! Don’t worry, both her parents are lawyers so they got her out.

I had a blast visiting Houston and definitely want to make another trip back. And to all the single ladies out there, may I just make special mention of the guys in Texas. They are big manly men (not skinny-jean wearing boys), charming and all polite, all Southern twang and cowboy boots. I didn’t meet a real cowboy but maybe I will when I come back.

Have y’all been to Texas? (Ooops, that’s really the last time I use y’all!)