Of Cockfights and Adobo 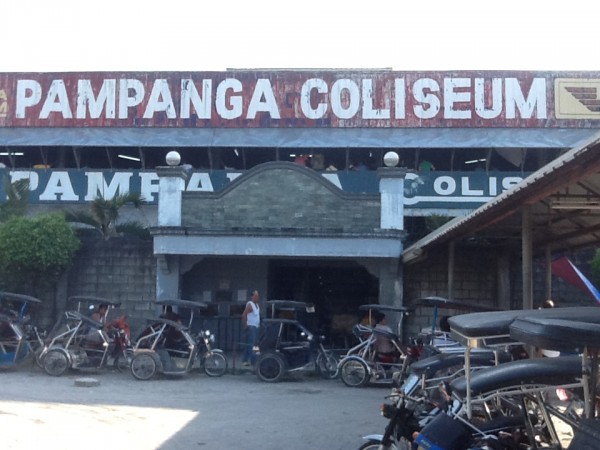 (Here’s a long feature that I wrote last year for a now-defunct magazine. I’m republishing today and I’ll be back to regular programming next week!)

I stared at the gates outside the arena, gray and rusty, paint peeling off. The scorching sun was beating down on us, bright and relentless, and on the ground there were clouds of dirt being kicked around by the flip flops that everyone wears. There were sounds of children playing nearby. It was a typical provincial scene, grand and quaint at the same time. We shuffled to the entrance, and then we entered a different world.

We were at the cockfighting arena in San Fernando, Pampanga, a province in the Philippines. Dark, humid, loud and thumping, I could feel a frantic energy pulsing in the air. It was my first time going to see a cockfight, or “sabong” as it is called in Filipino. Cockfighting is a blood sport so violent that it’s outlawed in many other countries, but it has been part of Filipino culture for centuries.

In the Philippines, cockfighting is a great equalizer, where the rich and poor come together without any class distinctions. It is a community activity that brings neighbors together and ignites the bonding of the townsfolk’s men. A common joke among the wives is that the roosters are luckier than they are, because their husbands caress and lovingly massage the roosters first thing in the morning. Up until the 60s, when most parts of the country started becoming more urbanized, almost every backyard had chicken and rooster coops, with every family being invested in the sport of cockfighting.

As with all new adventures, I was excited and slightly scared. I had an unfamiliar feeling of being an alien, a foreigner in this land, even if I am not. I was with a trio of men who made me feel safe and protected: my dad, my then boyfriend, and my dad’s uncle, who was a regular at the scene. My grand uncle, Bapa Seng (“bapa” means uncle in the provincial dialect), well-known in our family as a great cook, was popular in the area. It seemed like he knew everyone, weaving through the crowds with many a handshake and a wave. I knew he had a lot of friends, business associates, and – some would gossip – connections to the underworld. Everyone at the cockpit arena seemed to revere him, perhaps because he is a big spender (keep in mind that cockfighting is almost always akin to gambling) or perhaps, as I know it to be true, because he is a kind, jovial, and smart man. Either way, the sight of him looking so dominant and so at home made me forget about my nervousness. I chuckled to myself as I imagined someone kneeling in front of him kissing the ring on his pinky finger.  I briefly thought about the delicious pork stew he made for lunch, but I quickly lost my appetite when I heard the first blood-curling squawk.

The cockfights have begun. The fights would sometimes last a few seconds, sometimes it would last a few agonizing minutes. There were bet-wagers for each camp called “kristos” – so called for the crucified-Christ pose they assume, arms outstretched and fingers wagging, as they call for bets. There is a frenzy as the gamblers in the crowd shout out their wagers, which the kristos all somehow remember without having to write it down. And then there is cheering, bellowing, moaning, clapping, blazing eyes. A blur of movement, feathers rustling, a furious dash of sharp blades and beaks and wings and feet, and then it’s over. More cheers.

In this riotous scene, I could barely understand what everyone was saying and shouting, even though I spoke the language and understood the dialect.  Eventually I acquired the nerve to start betting as well. Just small amounts, equivalent to less than one US dollar, but enough to get my adrenaline going. Like my dad, I relied on statistics and kept betting on the same corner of the arena. If you keep betting on the same thing, odds are you will eventually win.

My dad, as a young boy, used to take care of his family’s chickens and roosters. My paternal grandfather, Lolo Ising (“lolo” means grandfather in Filipino), raised and trained cockfighting roosters for many years, and my dad would help him and accompany him to the cockpits. Cockfighting was a serious part of their livelihood, and my dad told tales of how they used to tie little weighted gloves to the roosters’ feet, so the roosters will get used to fighting with an object tied to it, as those gloves are replaced with spurs once the birds are in the cockpit. He grew up around sabong and understood this world. He was the one who told me that some aficionados would even sometimes prioritize buying food for the roosters before buying food for their families. I can hardly imagine my austere and silent dad, and equally serious lolo, breeding these aggressive roosters.

My dear lolo, who passed on his sweet tooth and love of reading to generations after him, was everything one would expect of a former war veteran: silent, strong, always sitting or standing with his back ramrod straight. I remember him waking up early every single day, and sitting at the breakfast table with a cup of coffee, already in a button down polo shirt, and enjoying native sweets so early in the day. He would always gesture to me and say, “mangan tana” (“let’s eat”). I suddenly had to reconcile the facts: the man who always let me snack on sugar cubes was the same person who was a cockfight aficionado, the same person so involved in this violent sport. Although the truth is I well understood that for my lolo, and for most other Filipinos, cockfighting wasn’t just sports entertainment. It was, in many ways, a natural part of life.

That Sunday afternoon in San Fernando, witnessing my first cockfight with my dad, thinking of my late grandfather, seeing my great uncle in his element, I felt a familial connection to this primal event, so maddening and captivating at the same time. So I kept betting.

And I kept losing. Most of my roosters lost. It was hard parting with cold cash but it was nothing compared to the horror of seeing blood in the cockfighting ring and seeing a limp rooster being dragged away. I myself started to feel tired and weak. Maybe I’m not really meant for this.

Meanwhile, the victorious roosters would make their masters proud. Cash would immediately be handed over to the gamblers. The men sported bright eyes, puffed up chests, looks of triumph. The winning rooster, whether bloodied or confidently unscathed, is whisked away for rest and care, and for preparation for the next fight.

But it is fate of the vanquished fighter that is more intriguing. People fight over the carcass of the once fiery bird… to immediately cook it and eat it. It’s called “talunan,” translated as the defeated, or the one who lost. The talunan is often made into “lutong talunan,” a chicken soup with ginger, garlic, onions, and pepper leaves. Aromatic and soothing, the soup can comfort and fortify, with the bird continuing to be of use even outside the cockpit.

My family prefers to cook the talunan as adobo.

Adobo. Now this is part of my world.

Adobo is any meat braised for hours in vinegar, garlic, soy sauce, black peppercorns, and bay leaves. Adobo is the unofficial national dish of the Philippines, with recipes ranging per region, and each family claiming theirs is the best. It’s the quintessential Filipino dish. Influenced by centuries of Spanish colonization, Chinese settlers, and indigenous ways of cooking, adobo is a vinegar-based stew that can keep for days without refrigeration, in fact tasting better the next day after the protein – be it chicken, pork, beef, liver, duck, quail, squid – has more time to soak up the flavors. Always served with fluffy white rice, adobo is a welcome meal that’s eaten for breakfast, lunch, or dinner. As someone who lives outside of the country, the very mention of adobo makes me miss the Philippines, the smell of the stew makes my mouth water, and each bite takes me back home.

The meat from the talunan works especially well for adobo, as the rooster, trained especially for cockfighting, has lean meat and muscle. It starts off rather tough, but after hours of braising, transforms into incredibly tender meat, fragrant with garlic and vinegar, with a slight spice from black pepper. I’ve never cooked talunan before (where else can I find meat from defeated roosters?) but I know someone who’s an expert.

Bapa Seng asked me if I wanted to try it. He offered to try and buy one of the defeated roosters, so we can make adobo at home. I said yes, of course. It is hard to buy a talunan because typically the family who owns the bird is the one that brings it home. However some people lose so much money on the cockfights because they bet with everything they have, that they don’t even have enough money to commute home, and thus have to sell their rooster. So it was extra special to be able to purchase one. The rooster was no longer thought of as a loser, but instead considered a delicacy. Bapa Seng was able to get one that day and for days we feasted on the chicken adobo. I even made an adobo sandwich one morning – I picked apart the dark meat, slathered some mayonnaise on toasted bread, and sprinkled a few drops of Tabasco on my sandwich.

I thought of those gladiator roosters in the cockpit as I ate. Strong and regal. Warriors. The source of livelihood and so much passion for their masters and their families. Their whole lives are spent in preparation for the arena, but it’s not just the fight that matters. There’s also tradition, community, camaraderie, and sustenance.

From fighting cock to an adobo pot, it seems that the rooster continues to amaze and entertain long after the cockfight.

4 Responses to “Of Cockfights and Adobo”