The Best Brownie I Ever Ate

… is from Vermont Brownie Company.

More specifically, the dark chocolate chevre brownie – a twist on the classic cream cheese brownie, but made with goat cheese.

I know that’s a big claim. I try not to dole out “the best thing ever” compliments on the blog often, because I take those things seriously. In fact, the only thing I so proudly declared as The Best Thing I Ever Ate is my mom’s fettuccine. So to say that I have found the best brownie – from me, lover of all things chocolate –  is serious. But it’s true, my friends. It’s the best brownie I ever ate.

I remember the first time I took a bite of these dark chocolate chevre babies. It was two years ago, and I actually declared, “these may be the best brownies I’ve ever tasted!” (When two years have passed and you still remember that sweet moment, and you still haven’t found a brownie to rival that, you know you have a winner.)

A couple of weeks ago, I emailed Vermont Brownie Company to ask if they are available in Boston – perhaps a retail location I haven’t discovered or any of the farmer’s markets? Shawna, one of the co-founders, replied back and crushed my dreams of easy-access brownies said that unfortunately, the brownies aren’t available in the Boston area; the brownies taste best when shipped directly to the consumer – which makes sense because the brownies are baked to order and contain no preservatives (you can order online here). She also generously sent me a box to sample, and it felt like Christmas morning when I opened the box: 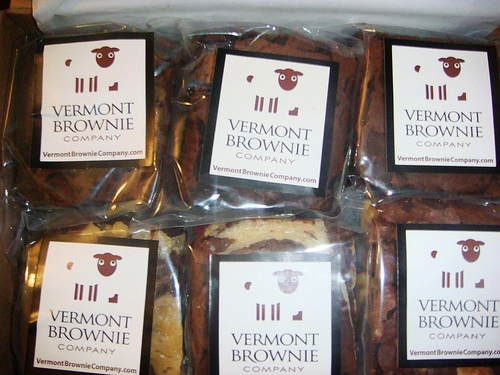 I wanted to share the deliciousness so I immediately gave a couple to the boyfriend, making sure he didn’t get my coveted dark chocolate chevre.  Now about that chevre brownie: it is rich and fudgy, with a crackly top and and thick swirls of goat cheese in the dense brownie. If you think goat cheese is a not a good replacement for cream cheese, you are wrong. It is PERFECT. I cut up the brownie into little cubes and paired it with my chilled beverage of choice (skim milk, of course). I want to say that I cut it up because it is so rich and I thought I could just eat little bites at a time (but I ended up eating half of the brownie in one sitting) but in reality I cut it up because it was just cuter that way, and easier to pop in my mouth while I was watching True Blood (hot werewolf and brownie bites? yes, please).

What’s the best brownie you ever ate?

7 Responses to “The Best Brownie I Ever Ate”