The first thing I said when we had dinner at Mooo, an upscale steakhouse at the swanky XV Beacon Hotel, was, “I feel like a princess!” I made that proclamation as I sat down on one of Mooo’s giant regal-looking chairs in the middle of the lush-looking restaurant. To which one of my companions, who was seated on the other side of the table on a long, low, sparse-looking bench, answered with, “and I feel like peasant,” And thus started a see-saw affair with Mooo, with our emotions (and taste buds) soaring high and low within minutes.

Our meal got off to a high start with the dinner rolls: rich, soft, buttery, served on a mini iron skillet, sprinkled with sea salt, and served with creamy, homemade, salted butter. The rolls elicited “mmmm’s” of approval from everyone at the table. We had an impressive beginning, and our expectations for the rest of the meal were high. But what came next, the Caesar salad, was disappointing. I was expecting a creamy dressing with a strong anchovy flavor and buttery croutons (especially after tasting those buttery rolls!) but what I got was a bland-tasting Caesar salad. It was mediocre; at its best it was Applebee’s good, but not expensive steakhouse for special occasions only good.

Then came the steaks. That was what we came there for. We came for the meat, and to splurge on the “classic, yet modern steakhouse dishes” that Mooo’s website claims. We were excited, especially after we saw the bone marrow shanks on the plates. The steaks were very tender (the Filet Mignon was cooked perfectly, but the Rib Eye was a little too rare in the middle) but there was not a lot of marbling. Steak marbling was what we all wanted – we expected a rich, sinful steak dinner. And while we did get some big, fat, juicy steaks, they did not taste particularly rich nor flavorful.  The lack of fat could have been saved by the accompanying bone shank, which seemed like the most exciting part of the dish. But alas, it was filled with bone marrow butter – butter, garlic, parsley – but no actual bone marrow. So much for excitement. 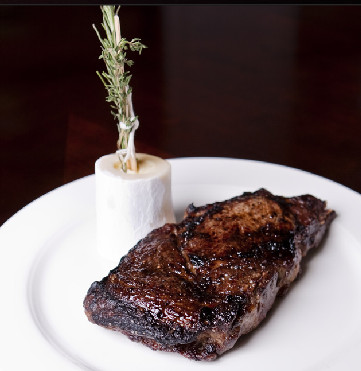 While the steaks and non-bone marrow were passable, it was the steak sauces that were impressive and worthy of a royal-looking restaurant. The Bearnaise sauce was as velvety and creamy as expected, and the Mooo Steak Sauce was a show-stopper. It had a spicy kick to it, almost Mexican-tasting, balanced with a smoky flavor; it was a modern twist on a classic favorite – just like what Mooo promised its customers.

Unfortunately, most of the other accompanying foods – the side dishes – were not at par with the sauces, and were just at the same level as the steaks: boring. The Mac and Cheese and Whipped Yukon Gold Potato were pleasant but uninspired, and the Creamed Spinach was too watery. However, the Truffled Parmesan Fries – the saving grace of the sides, the saving grace of the main course! – were mouth-watering; we cleaned up that dish up to the very last fry. 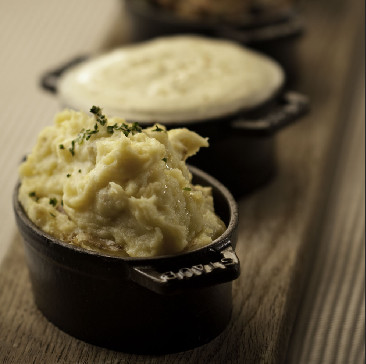 We rounded off our dinner at Mooo on another high note with dessert: the Lemon Meringue Pie was perfectly sweet, tart and custardy, and the Limoncello was crisp and refreshing. And when the bill came, there were four complimentary mini-smores: shaped like 2-inch Hershey’s kisses, with a graham cracker bottom and marshmallow filling, covered in silky milk chocolate. As a dessert-lover, those little goodies actually bumped up my lukewarm appreciation for Mooo to almost warm (no surprise here right?).

At the end of the meal, I didn’t feel princess-y anymore; I felt underwhelmed and a little confused: the best part of my steakhouse meal was not the meat, but the rolls, fries and dessert?? Plus, I came here for the steaks, not the steak sauce. I’m not sure if I’m coming back again any time soon… 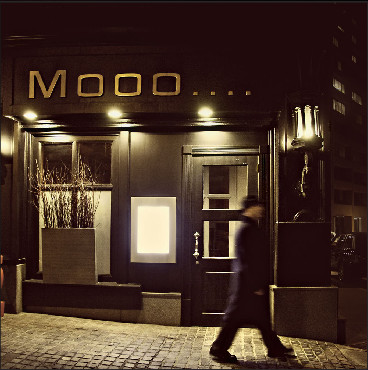 walkin’ away… (yup, another photo from Mooo’s website – I forgot my camera that night!)

« Previous
The Importance of Planning
Next »
Mom and Cheese