This season, there was an episode on Top Chef about a Tribute Dinner. It was a chance for the chefs “to reflect and pay homage to the person who taught them how to cook by making a dish in their honor.” I’ve never really been officially taught how to cook by anyone – I’ve said before that I learned how to cook from watching Rachael Ray and Ina Garten on TV – and my love for food has been heavily influenced my parents, but the person who has inspired me to learn how to cook, to learn how to wield a big chef’s knife, to chop and fry and simmer, is my Tita Ine.

I think Tylor prepared a dish for his Japanese nanny, and that was the most touching for me because when I was a kid, Tita Ine was my nanny. She is the woman who makes THE BEST tsokolate, who so gamely demonstrated her whisking method for my blog. When I was home in the Philippines over the holidays, Tita Ine would ask me everyday if I had any “special requests” and I was not shy in rattling off the many Filipino dishes that I was craving. 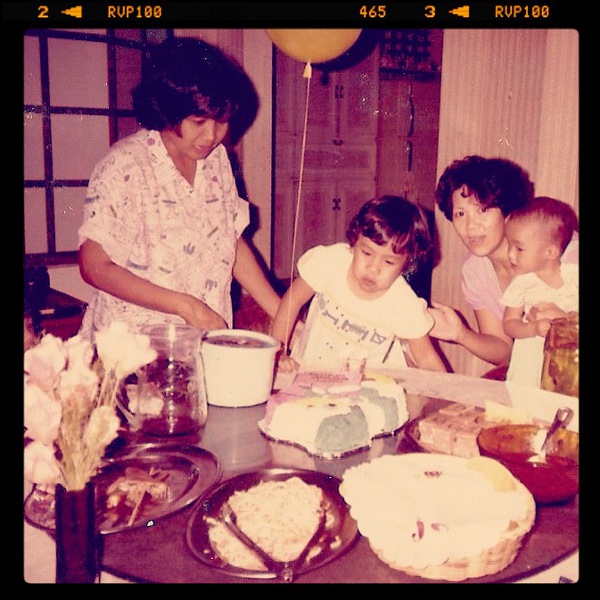 Tita Ine took care of me when I was a kid, and she still spoils me every time I come home. In this photo (she’s the one standing on the left), she seems to be encouraging me to blow out candles on the birthday cake… even if it wasn’t my birthday… (You can see Monica and her nanny on the right; my youngest sister Patty wasn’t born yet.) 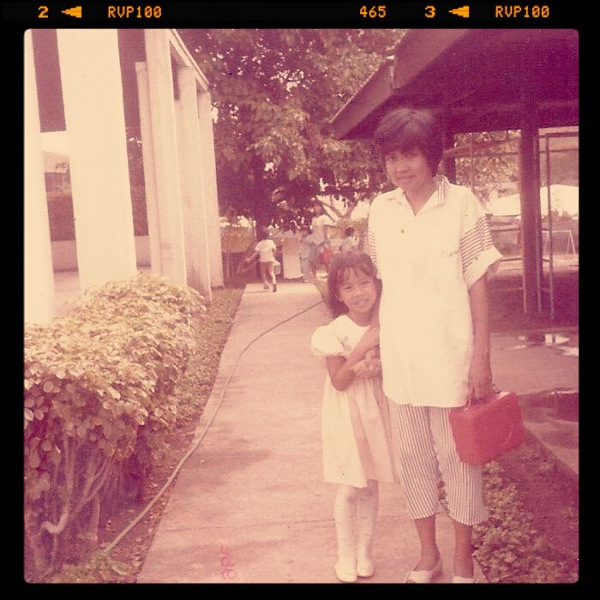 This was when I was in preschool, and Tita Ine was carrying my red lunch box for me while I posed in my stylin’ printed white tights. 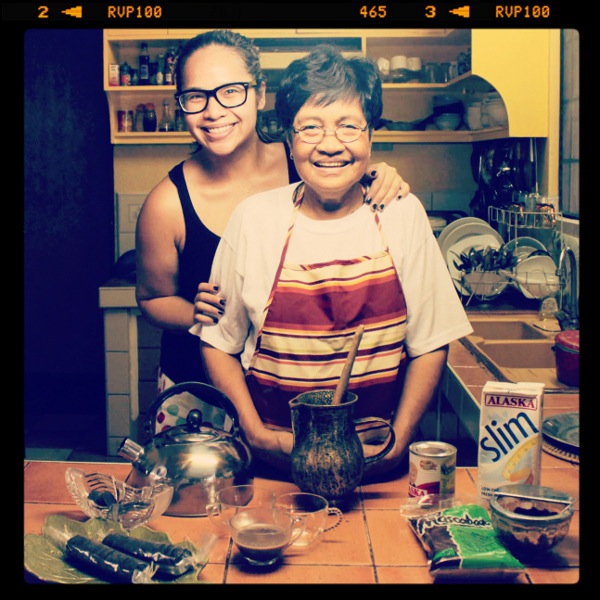 And this was from our hot chocolate session during the holidays. The times where I would willingly post pictures of myself without make-up are very rare and far in between but I love this photo too much! It shows how happy I was, and Tita Ine being her usual self: generous, sincere, and in her element in the kitchen.

Now that I’m back in Boston, and I can only talk to Tita Ine via phone and FaceTime (thank God for technology), I have resorted to cooking my own little takes on Filipino food. This latest one is based on a dish called Ginataang Sitaw at Kalabasa, which translates to Green Beans and Butternut Squash in Coconut Milk, and it is one of her specialties. 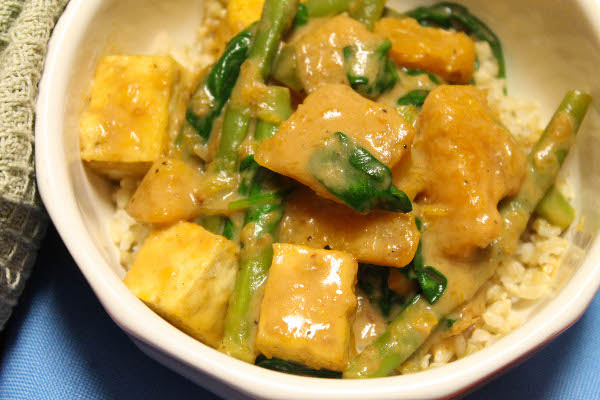 Tita Ine often prepares this, and it is wonderful served hot over soft, fluffy rice. 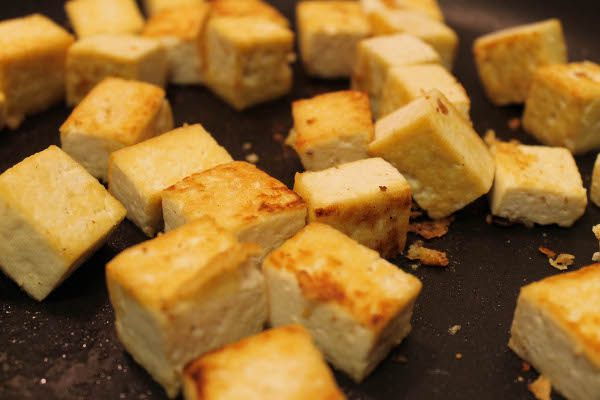 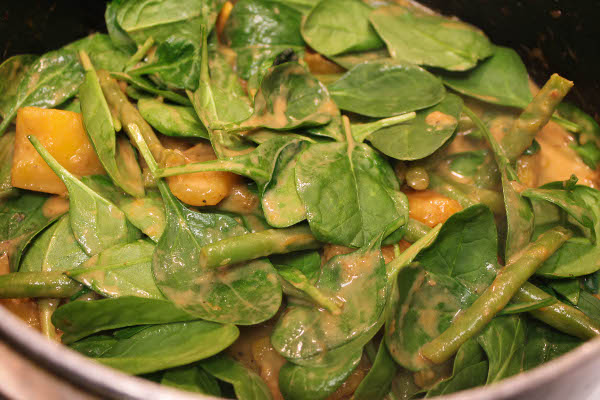 I also stirred in a packed cup of baby spinach… 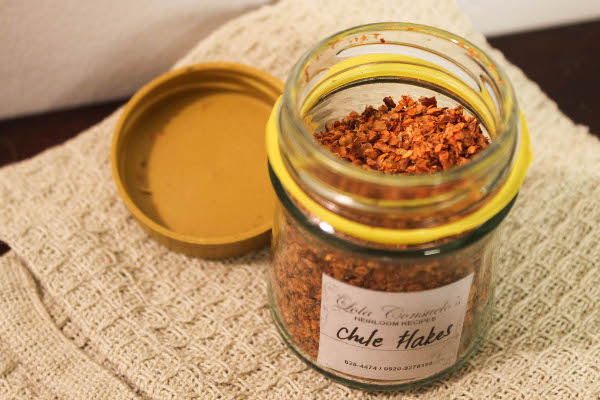 … and a pinch more chili for added heat. I brought back a little jar of siling labuyo flakes, which is a Filipino chili similar to bird’s eye chili. The sharp spice from the chili flakes and the chopped serrano chili added a nice layer of flavor to the SouthEast-Asian blend of garlic, shallots, and ginger simmering in coconut milk.

But in spite of my modifications, the taste stayed true to what I remember from home. 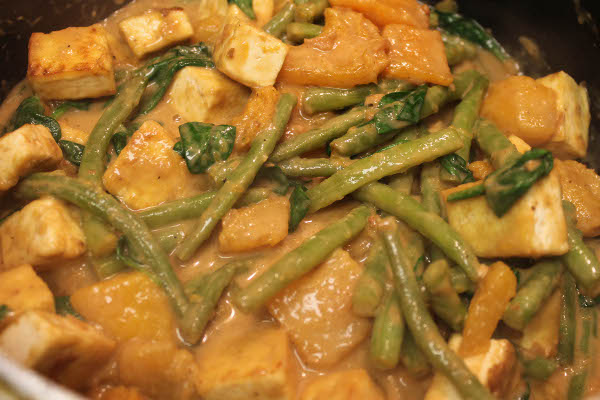 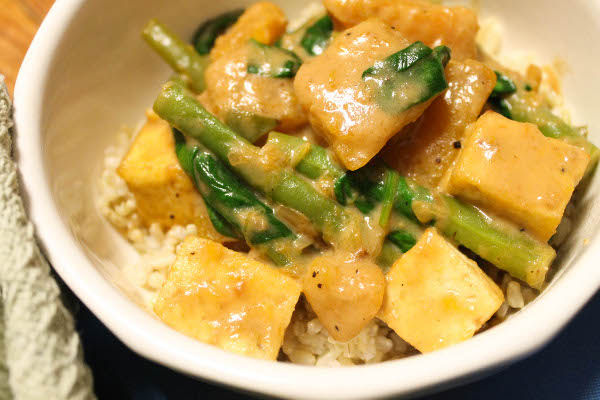 I called home to tell Tita Ine about my own take on one of her signature dishes, and she was very proud of me. I’m trying to cook Filipino food more often and I’ll always look to Tita Ine for inspiration (and her approval). I’m not sure if the judges on Top Chef will ask me to pack my knives and go for this dish (at least it’s not a meatball), but I really like what I came up with so I stand by my dish.

Do you watch Top Chef? I am rooting for Paul!

27 Responses to “Green Beans and Butternut Squash in Coconut Milk”