One glance at the sign outside the glass doors. One look at the sparse interior, and the row of condiments at each table. One word of Tagalog floating from the next table’s conversation, then two, then three, then full-on sentences in my native language. One whiff of the adobo, and the steaming white rice, and the sizzle from the sisig. And suddenly, I was transported back to the Philippines.

I’ve been to JnJ Turo-Turo before – this was my second visit. My first time was with my Filipino friends, and while we criticized some of the dishes (isn’t is always like that? You’re always most critical of the things that are closest to you and that you’re most familiar with?), we cleaned our plates to the very last butil (grain) of rice.

Turo-turo means “point and point” – it is the coloquial term for small, inexpensive, mom-and-pop fast food restaurants where you just point at the food you want to eat.

I found myself explaining that during my second visit to JnJ, this time with my American friends, which means I was automatically the leader, the expert, the translator. 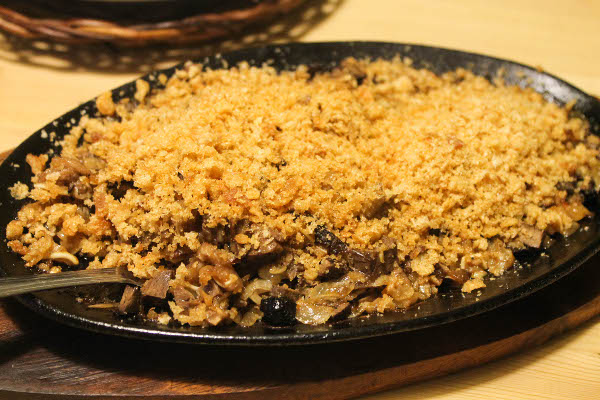 There is a type of food in the Philippines called pulutan – salty, savory, fatty plates of food for sharing. It is what is served when people are drinking, and sisig (pictured above) is probably the most popular pulutan of them all. 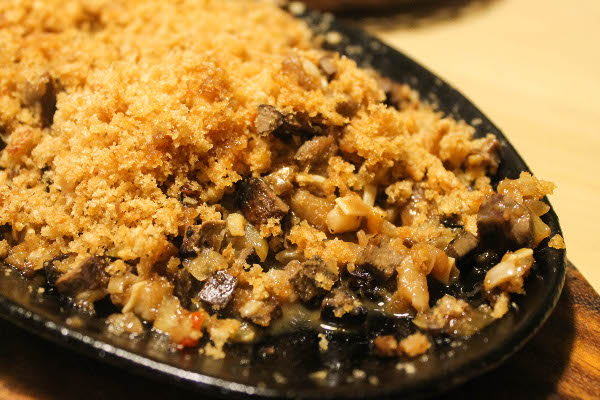 Sisig is a sizzling plate of pork parts and offal: pig ears, pig cheeks, pig snouts, liver, chicharron (crackling pork skin), all boiled, broiled, and fried with plenty of onions, garlic, and chilis, then served on a hot platter. When Anthony Bourdain visited the Philippines, he said:

“the amazing, porky delights of sisig…  If you’ve never had this divine mosaic of pig parts, chopped and served sizzling and crisp on one side on a screaming hot platter, then you’ve yet to have one of the world’s best beer drinking dishes.”

I think Mr. Bourdain and I share the same palate. 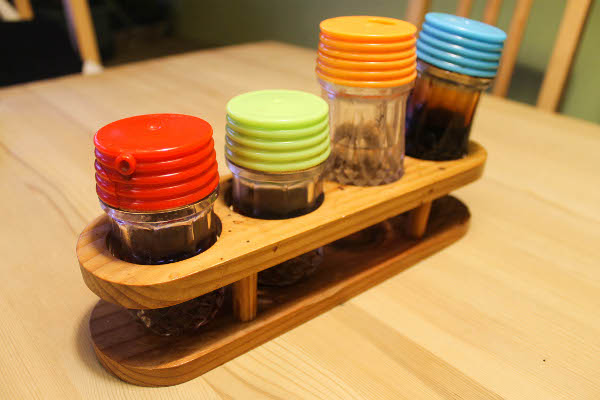 I explained a few other cultural tidbits to my friends, such as the fact that there is always a selection of condiments served with every meal (soy sauce, fish sauce, vinegar, Knorr seasoning, Worcestershire sauce, etc)… 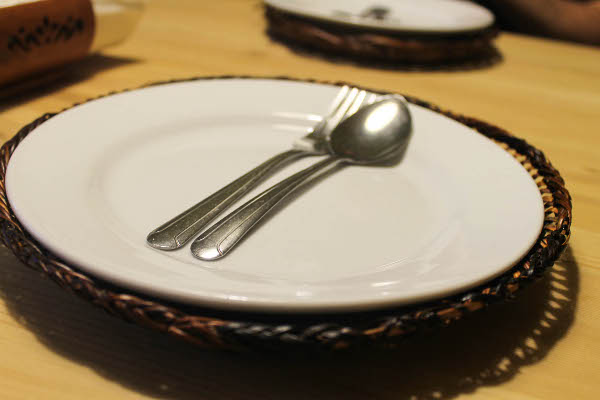 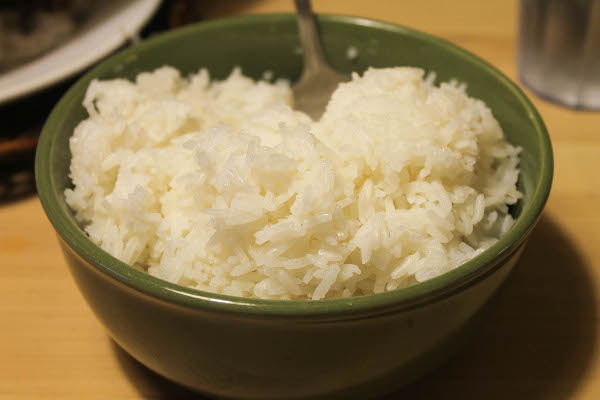 … and that everything is served with rice, as rice is eaten for breakfast, lunch, and dinner. 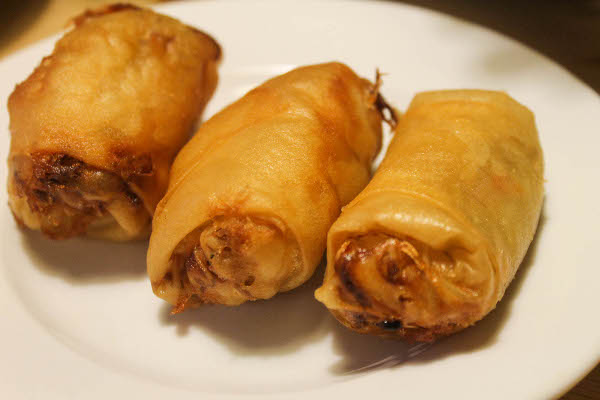 We shared a few dishes that night, including these lumpiang gulay (veggie egg rolls). 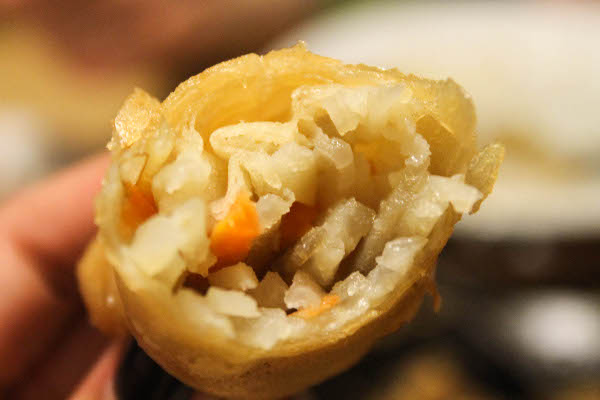 While it looks unappealingly monochromatic, I really liked the filling of bean sprouts, carrots, potatoes, and tofu. 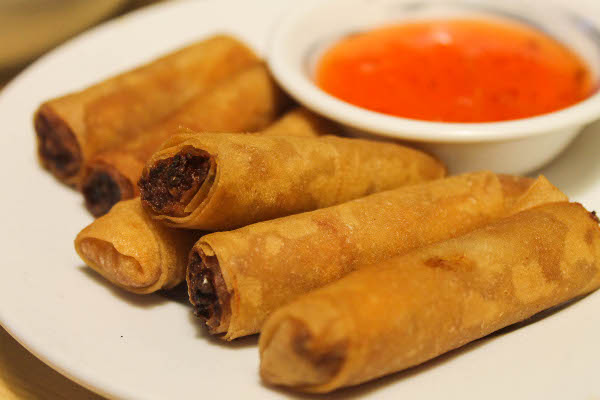 We also had some lumpiang shanghai, or pork egg rolls. If you’ve ever had a pork egg roll from a Chinese restaurant, just think of these as the baby version. 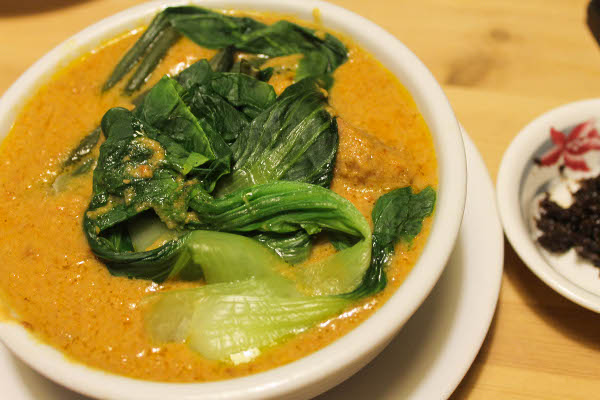 This dish is called kare-kare, and it’s beef and tripe stew with peanut sauce and bokchoy. I’ve had many versions of this (vegetarian, pork) and my family makes it with oxtail (which to me, of course, is the best version). The peanut sauce is thick and creamy, and kare-kare is always served with a side of salty bagoong (shrimp paste), which I did not try because I’m allergic to it. 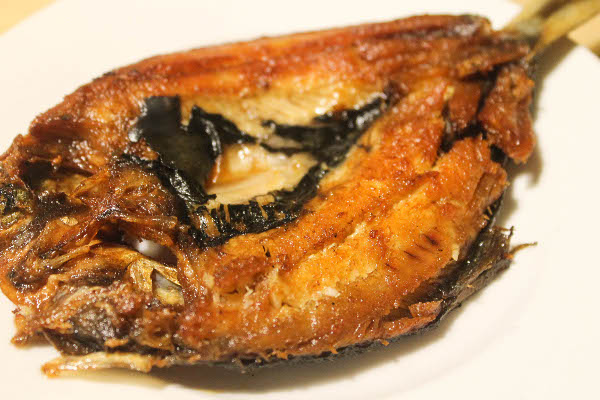 Remember when I went to Trade because I was craving a whole fish? The roasted fish at Trade had nothing on JnJ’s daing na bangus, or fried, seasoned milkfish. I’ve tried many kinds of fish but I’ve never had anything like milkfish: mild, tender, and smooth-tasting without that fishy aftertaste. The fish we had was small, but it was already deboned, making it easy to eat. The milkfish was actually my favorite dish at JnJ. 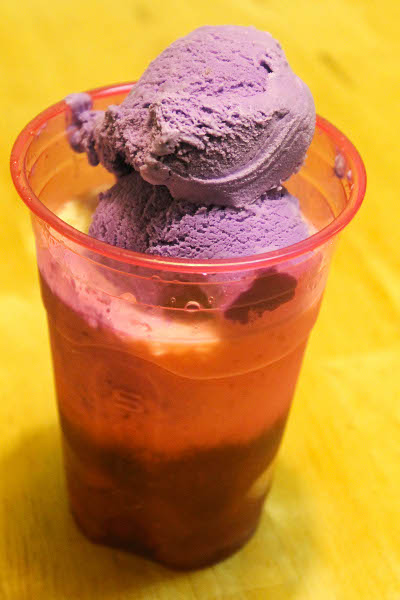 I take it back – my favorite dish at JnJ was the dessert! This was halo-halo, which I’ve mentioned in one of my posts from the Philippines. Halo-halo means “mixed.” It is a combination of sweets, topped with shaved ice, milk, and flan or ice cream. The sweets can range from sweetened kidney beans, garbanzos (chickpeas), cubes of jelly, tapioca, sweet potatoes, jackfruit, caramelized plantains, macapuno (coconut) strips, and other local delicacies. JnJ had a mix of sweet cannellini beans, tapioca, sweet potatoes, and plantains – topped with my favorite ube (sweet purple yam) ice cream. I wasn’t expecting to eat one of my very favorite things, and as soon as I saw the vibrant purple ice cream, I squealed with delight. It was the perfect ending to our meal.

Did I think it JnJ Turo-Turo the best Filipino food I’ve eaten? Of course not, this is not my Tita Ine’s cooking. Have I had better Filipino food outside of the Philippines? Yes, especially from the restaurants I’ve tried in New York City and New Jersey. But was the food special? Yes, yes, yes.

It was special, indeed. And it was authentic. And it brought me right back home.

Have you ever had Filipino food? What’s your favorite?