I find beets a little too slimy… And I don’t like its undecisiveness – is it sweet or is it bitter? Is it soft or is it crunchy? Does it taste earthy or does it taste like dirt?

But what I do like about beets is its deep juicy hue. I love the jewel-like color: a cross between blood red and dark and stormy purple. I love how beet juice looks: spreading, oozing, staining.

But beets? Nah, never liked them… Until I tried the beet tzatziki at Sofra.

One bite and I was hooked. Was it the dill? The yogurt? The garlic? The bright hot pink color? I think it’s all of that. 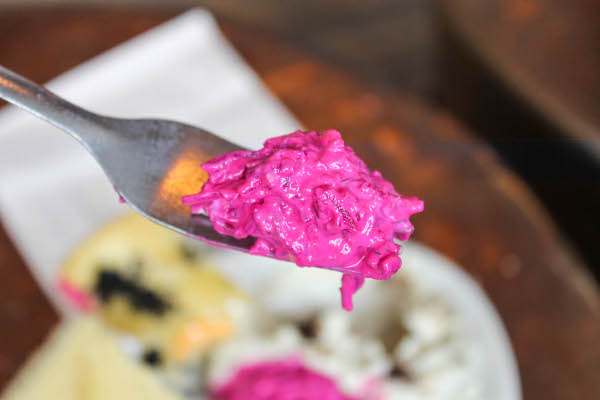 I’ve written about Sofra before, and how much I adore the chocolate baklava there. (You read that right – chocolate baklava.) It is one of my very favorite lunch spots, and it is the only place where I actually enjoy beets.

More often than not, I order the mezze plate, which comes with five different scoops from the mezze bar and two pieces of soft focaccia bread studded with black sesame seeds. Mezze is a selection of small dishes served in Mediterranean and Middle Eastern cuisine. 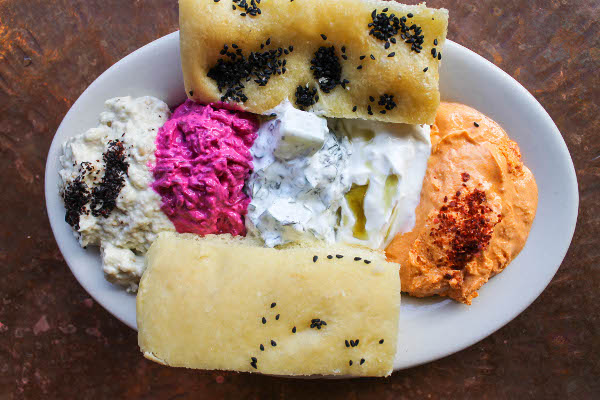 This mezze selection consisted of smoky eggplant with pinenuts, beet tzatziki (tzatziki is a Greek/Middle Eastern appetizer or sauce that’s usually made with cucumbers, yogurt, garlic, and an herb like dill, mint, or parsley), cacik (“everything green” with garlic and yogurt), hot pepper labne (strained yogurt) with mint drizzle, and whipped feta with sweet and hot peppers.

It is a very generous portion and I always share it with my tablemates. I make them try everything, especially the beet tzatziki. I’ve turned into the girl who urges her friends to “just try it, you’ll like it; I don’t like beets either, but I love this” while shoving the hot pink glob towards them. It really is that good. I’ve also turned into the girl who aggressively urges her friends to get dessert from the pastry selection at the counter: 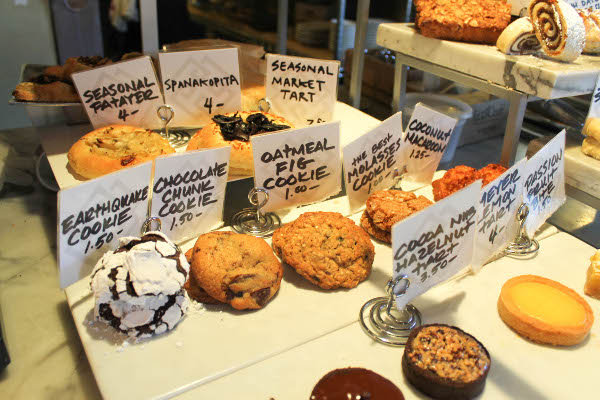 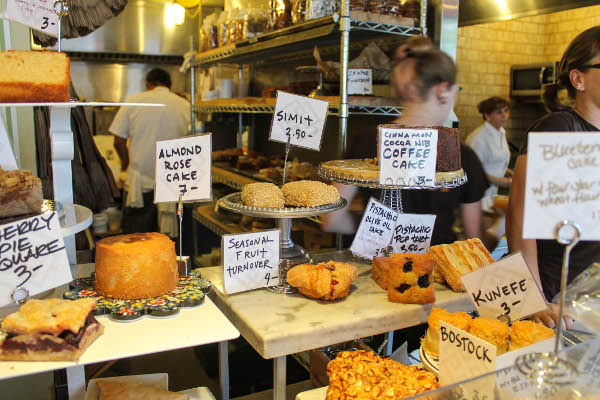 Oh who are we kidding, I’ve always been that girl. 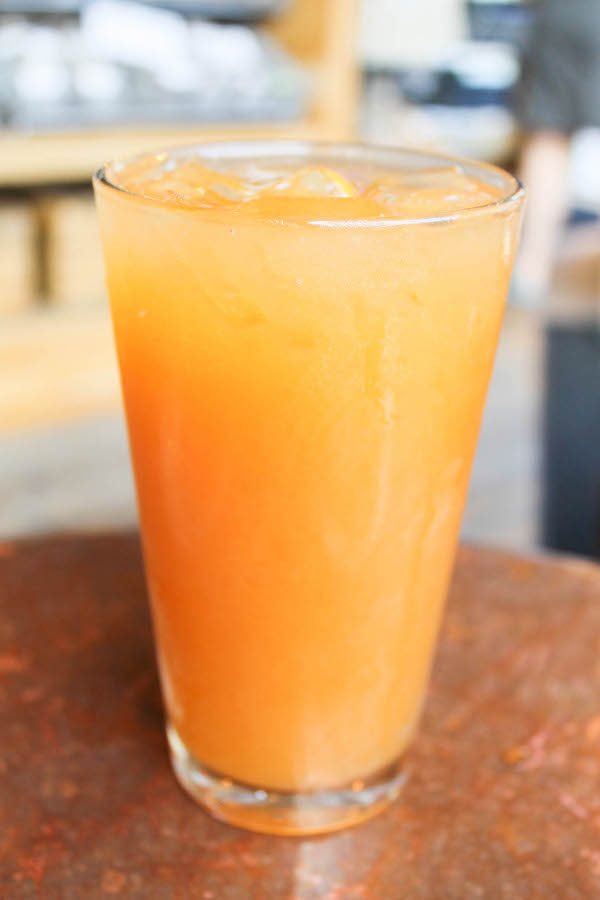 When I’m at Sofra, I always order the red dragon iced tea (green tea with sour cherry puree) but this time, I switched it up and got Lada’s iced tea, which is an herbed tea with lemon, apricot, and orange puree. It was very light and refreshing, really perfect for hot summer days. I do prefer the red dragon iced tea though because of the perfect little pinch of tartness, but this herbed tea holds its own for its subtle sweetness and citrus hit.

Sofra is small, and it has a small menu, but the whole store is brimming with all sorts of treats: 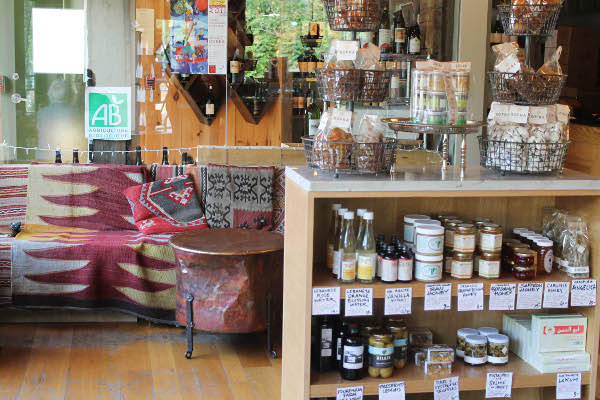 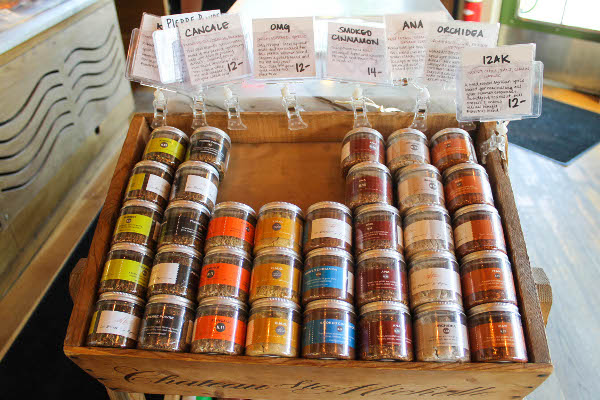 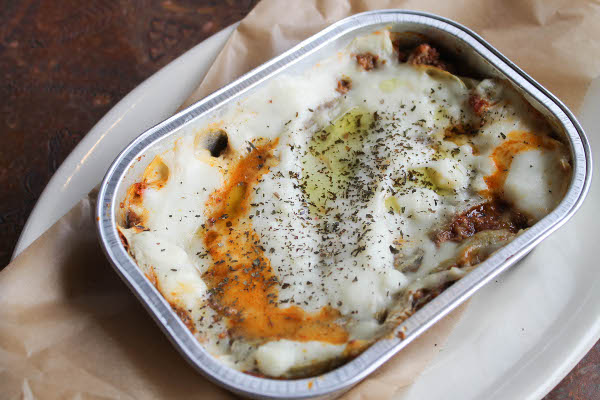 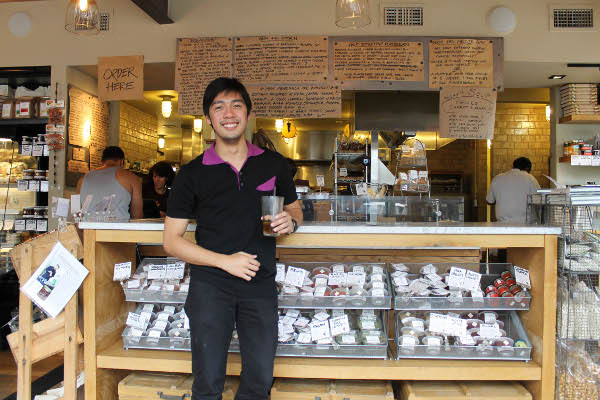 That’s my friend Sherwin (who is also our intern at Overdrive) – he ordered the eggplant moussaka for lunch and declared it delicious. 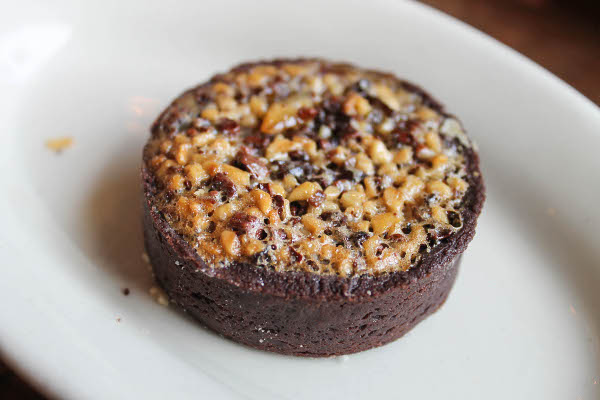 The chocolate hazelnut baklava was not available during my last visit so I had to “settle” for this chocolate hazelnut tart instead. However, this wasn’t the highlight of my lunch; I really came here for the mezze plate. I can’t get enough of the whipped feta and the hot pepper labne and yes, the beet tzatziki.

Last year when I posted about Sofra, Dan said that the beet tzatziki is unreal, but I ignored his comment. It took me a year to come around, but Dan, you are right! I should’ve known that I would like something this pink. 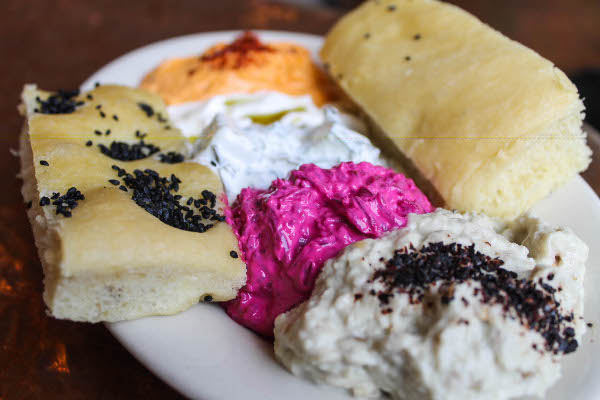 Sofra is the sister restaurant of Oleana, which in my opinion is one of the most exquisite restaurants in Boston.  I think they serve beet tzatziki at Oleana too.

Have you ever tried beet tzatziki? What would you order from a mezze bar?