Last weekend in NYC, my friends and I were walking around SoHo when we spotted a little bakery/cafe called Choco Bolo. One of my friends recognized it as the place formerly known as “The Best Chocolate Cake in the World” – which apparently was recently reborn as ChocoBolo.

When you say the words “best chocolate cake in the world” to me, you can expect my eyes to glaze over, my hands to start sweating, my heart to palpitate faster, and all my thoughts to be about trying a bite of that cake. Thankfully, it only took 3 seconds to convince my friends that we should go in and get some cake. 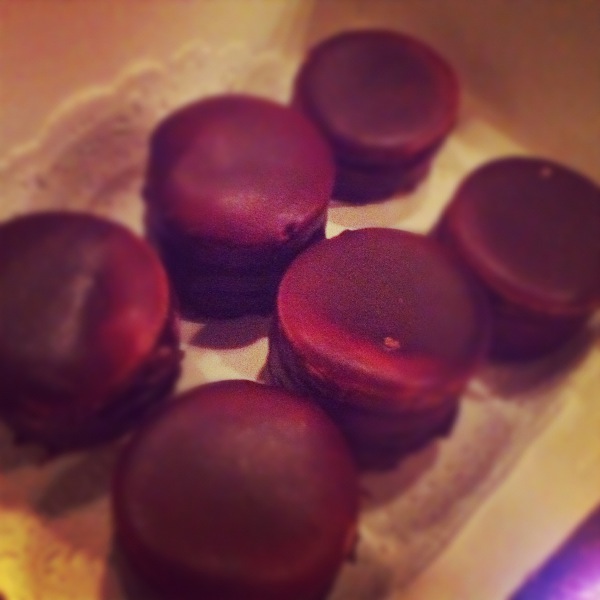 this was the signature cake (what they used to sell at The Best Chocolate Cake in the World) and you can get a slice, an individual cake, or mini cakes. We chose the adroable mini cakes (they were about the size of a French macaron)

The “cake” wasn’t even cake – it was velvety chocolate mousse sandwiched between layers of light buttery meringue, covered in chocolate ganache. It was, undoubtedly, DELICIOUS. But it certainly wasn’t something I expected when I think of chocolate cake. However, I would go back to that place in a heartbeat and order the same thing! I’ll just try to forget that they used to call themselves “the best chocolate cake in the world”.

Aside from these little velvety chocolate bites, I’ve also eaten some very good food during the past few months that all did not make it to the blog. So I’m taking this opportunity to share some of my favorite eats and treats that were previously undocumented: 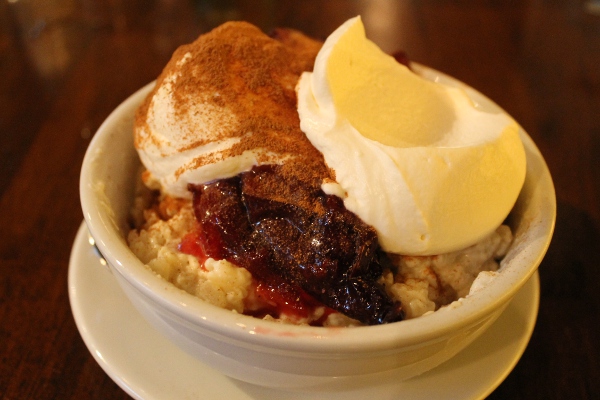 Abigail’s is another one of the new Kendall Square restaurants. I went there for a friend’s birthday and while I wasn’t super impressed with the food, I was really impressed with the desserts. We got this fall pudding from the Fall menu, the flourless chocolate cake, and the sweet ricotta pie, and they were all flawless. 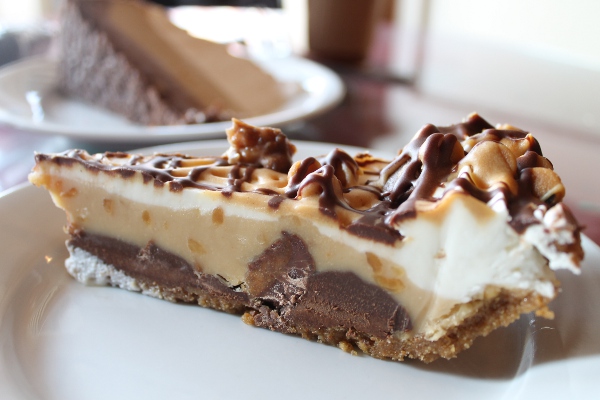 I couple of weeks ago, I went to Portsmouth, New Hampshire with nine (!) of my blogger friends. Bridget, Elina, Elizabeth, Megan, Meghan, Daisy, Michelle, Emily, Jen, and I had a Girls Day Out trip and we enjoyed a lovely day in beautiful Portsmouth, just walking around, exploring, and of course, eating. The cheesecake above is from a charming little cafe called Breaking New Grounds. 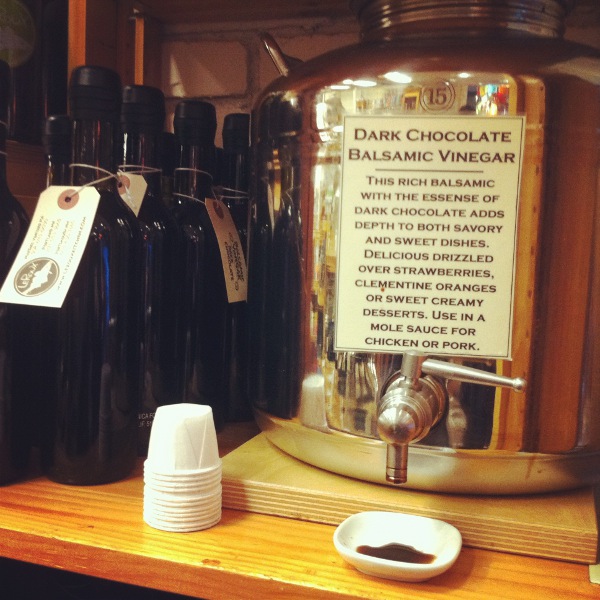 This pic was also taken from our Portsmouth day trip, at LeRoux, which is specialty kitchen/cookware store. They have a vinegar tasting bar and I fell in love with the dark chocolate balsamic vinegar. I’ve never tasted anything like it – so rich and dark and luxurious. When I was at the Union Square Farmers Market last weekend, there was another stall (called The Filling Station) that sold unique vinegars, oils, and salts too, and I was tempted to but a bottle of the chocolate balsamic vinegar but decided against it because I didn’t want to commute home to Boston carrying it (which I now regret). 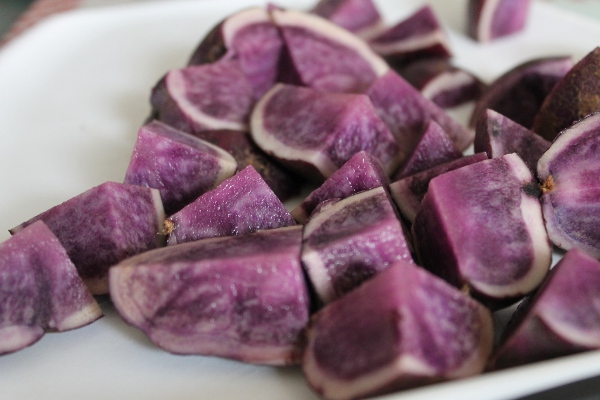 I was instantly drawn to the beautiful color of these purple potatoes from my farmers market. I thought at first that they were purple yams and would be sweet, but they were just regular potatoes, just a much nicer color :) 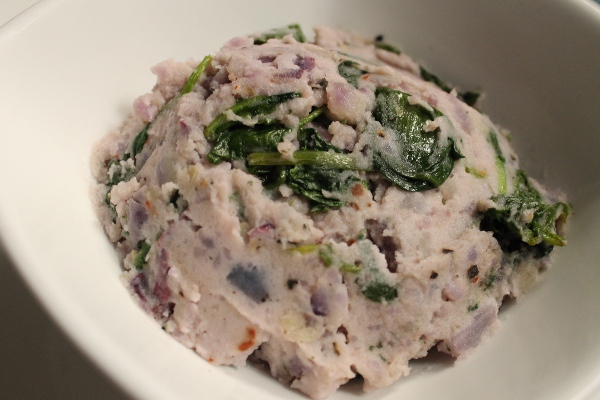 I made truffled mashed potatoes by mashing them with some nonfat Greek yogurt, sauteed spinach, some truffle oil and truffle salt 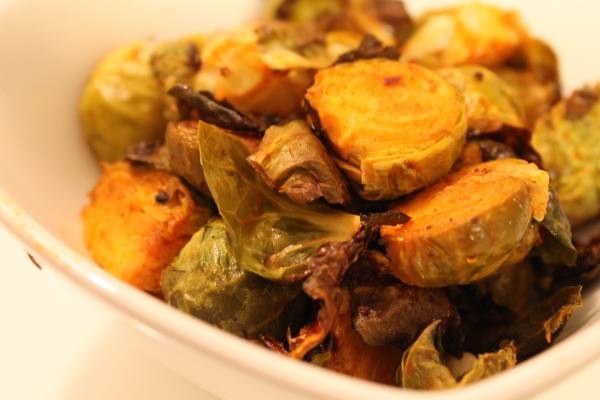 After I read Erica’s review of Highland Kitchen on her blog In and Around Town, I couldn’t get the idea of buffalo fried brussels sprouts out of my head! I love brussels sprouts and I love buffalo sauce but I didn’t really want to deep fry them, so I just roasted the brussels with olive oil and Frank’s Red Hot Buffalo Sauce (then tossed them in a little more buffalo sauce because they got a little dry). These are really good. I’ve added some blue cheese crumbles too to make a unique side dish, and topped with an egg to make an easy dinner. 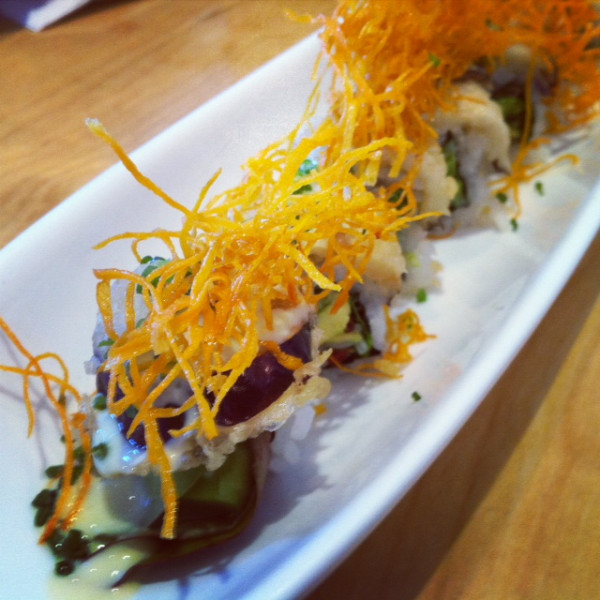 I work near Fish Market in Allston and my co-workers often get sushi for lunch. I’ve written about how much I like Fish Market already (best hamachi kama in town) and one of my favorite items there is the Crazy Eggplant Maki, which comes topped with shredded sweet potato. 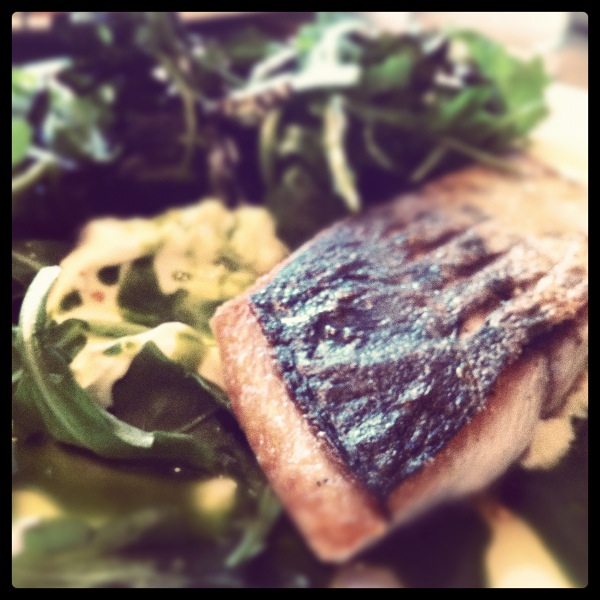 (Why would I go to a place famous for its pork and order a seafood dish? Because this was the day after Thanksgiving and well, I just didn’t have room for any more meat in my belly.)

My friends and I have been wanting to check out The Spotted Pig in the West Village and when we finally got there, I ended up getting one of the day’s specials: a perfectly seared mackerel. Sometimes mackerel can taste too fishy/oily but this was crisp and light and flaky, perfectly balanced by the small dollop of creme fraiche and minty greens. 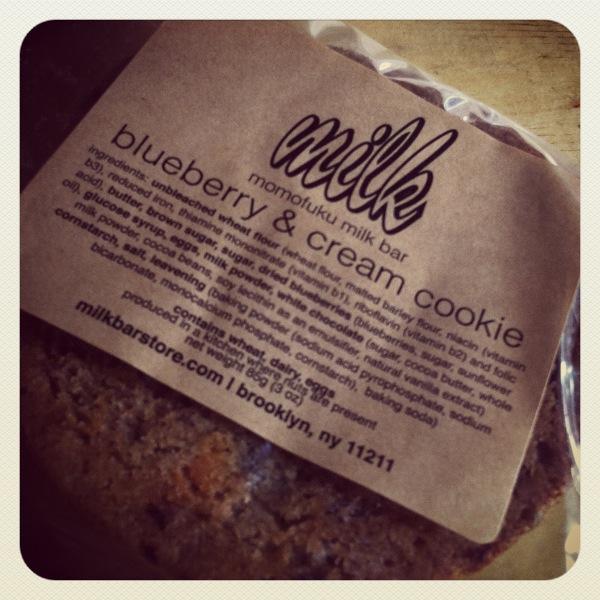 I know that Momofuku Milk Bar is famous for its compost cookie and crack pie, and I’ve tasted both and liked both, but this past weekend I decided to try another cookie, which was the Blueberry and Cream cookie. The inspiration for this cookie is the crumbly top of blueberry muffins – my favorite thing about muffins – so I enjoyed every last sweet, chewy bite. I would venture to say that it was The Best Blueberry and Cream Cookie in the World.

Okay, so it was the only blueberry and cream cookie that I’ve ever tasted, but it was everything I expected it to be.