Let me present to you a Hamachi Kama Restaurant Throwdown!

A hamachi-wha?? If you’ve never heard of nor tried hamachi kama, then you are missing out. Hamachi kama is the most tender cut of the yellowtail tuna. It is the jaw/neck/collar of the fish, and is most often served grilled, seasoned simply with some salt and pepper, and finished with a splash of lemon.  It is very succulent, and in my opinion, one of the most under-appreciated seafood dishes.

The throwdown contenders: Osushi, a chic Japanese outpost at Boston’s Back Bay, vs Fish Market, a casual little sushi bar in Allston. When it comes to hamachi kama, will the cool Copley Mall resident sock the Allston standby in the jaw (sorry, can’t help it) or will Fish Market prove its worth as a hidden gem?

I ordered the hamachi kama as my entree at both restaurants. Asian Insider tip: the hamachi kama is often listed in the appetizer menu of Japanese restaurants and sushi places. Sometimes it’s not even listed, but you can always ask your server if they have it (most places keep it on hand for regulars and diners in the know).

I first tried it at Osushi: 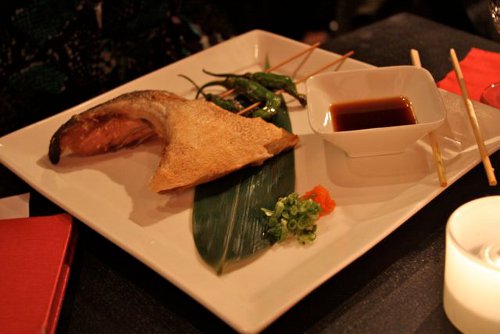 The hamachi kama looked dry, but was actually moist inside. I like how it came with three little grilled peppers, but missed the squeeze of lemon. Lemon always brightens up a dish, and goes very well with seafood; I’m surprised this didn’t come with a small wedge. The fish tasted fresh and went well with the slightly sweet dipping sauce.

Then I tried it at Fish Market: 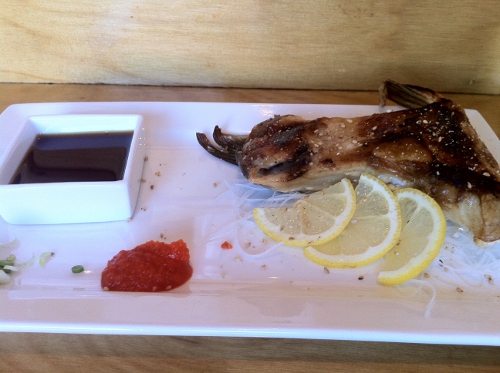 One bite and I knew this is the clear winner. The hamachi kama was tender and meaty. It was also seasoned perfectly. And yes, I was swayed by the three little lemon slices on the plate (instead of grilled peppers). It was sumptuous, and while I don’t usually like the charred portions, I ate every last bite of this dish.

The throwdown is over – Fish Market wins!

Hamachi kama is another one of those cuts that is usually taken for granted, with most people throwing it away. While it is not very attractive to look at, its appearance belies the sweet, fatty, tender meat of the fish. This cut, called panga ng tuna, is actually pretty popular in the Philippines and it took me a few years of living in the US to realize that it is also commonly served in Japanese restaurants here.

Have you ever had kamachi kama? What’s the weirdest fish part you’ve eaten? Fish eyes? Belly? Skin? Collar? (I’ve eaten them all!)

« Previous
Fried Egg for Dinner
Next »
Fudge with Espresso Salt