When was the last time you visited a new restaurant and you couldn’t stop raving about the dishes?

For me, it was Locanda Verde in New York. But most recently, it was at Catalyst in Kendall Square. Catalyst is Chef William Kovel’s new restaurant serving  modern American cuisine, and one of the newest places that just opened in the burgeoning culinary hub. We had one of those perfectly lovely meals that was filled with dish after delightful dish. The food was simple but impeccably prepared, and the whole place just gave off such a warm, welcoming vibe. 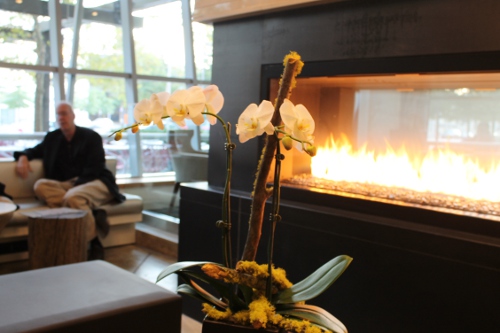 and Catalyst is beautiful, with a chic fireplace and lots of open spaces

In fact when we walked in, I said “I can’t believe we have something this sexy in Cambridge,”  because the place was really gorgeous. 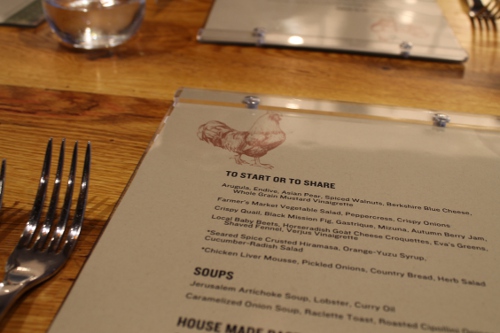 we were browsing through the menu deciding which items to get, when Chef William came over and said that they will bring out rounds of different dishes and that we should be prepared for lots of food (Catalyst generously provided the whole dinner free of charge) 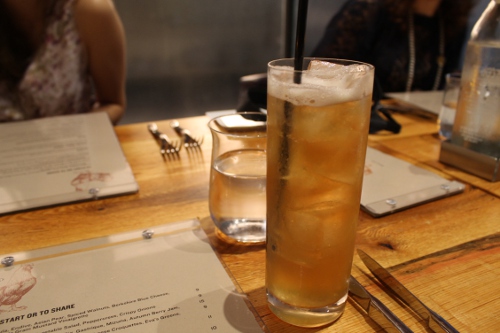 I quickly browsed the cocktail selection and settled on the Chubbs Peterson ("possibly the next Arnold Palmer") - bourbon, iced tea, lemon, and peach bitters

We munched on soft rosemary foccacia bread with the softest salted butter, then the appetizers arrived: 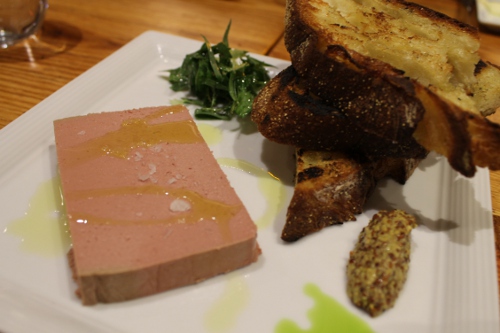 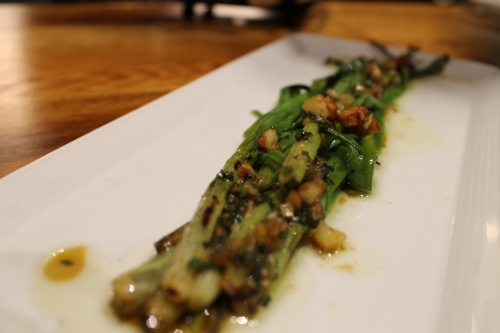 I actually really like liver so I’m glad we got to try the chicken liver mousse. It was creamy but not exceptionally liver-tasting so even the liver-averse in our group had a few bites.

As for the grilled scallions, I had no idea scallions could taste that incredible when they are grilled and drizzled with a house-made pesto. And to think I used to not like scallions! 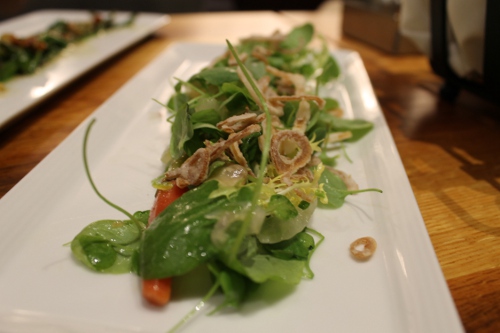 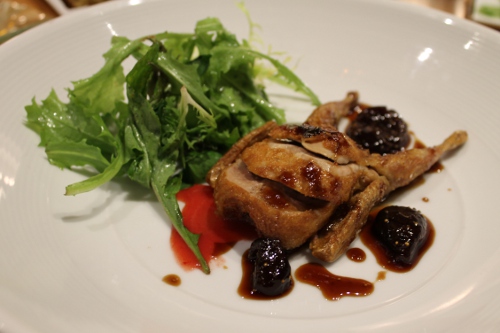 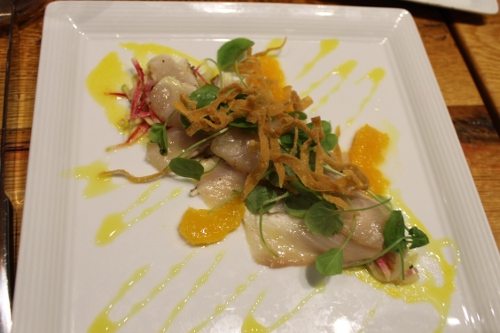 and the spice crusted hiramasa

And then the pasta courses arrived.

The pasta dishes at Catalyst are some of the best – the best! – I’ve ever tried (and you know I’ve tried a lot of pasta dishes). 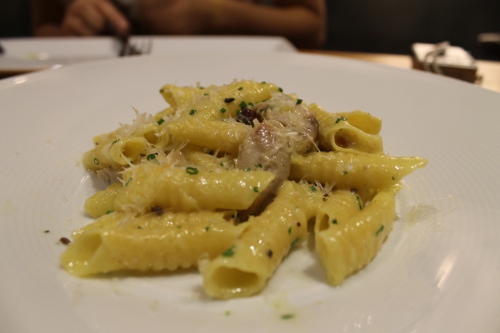 let's start with the garganelli with chicken oysters, bacon, and black truffle butter

Do you know what a chicken oyster is? First of all, it’s not an oyster. It’s a part of a chicken that’s located near the thigh, and it’s incredibly tender and sweet. It taste slightly like dark meat but the texture is more firm/taut. And it is delicious. For those of you who watch Top Chef, chicken oysters might ring a bell too. Remember Top Chef All Stars? Richard Blais accused Mike Isabella of stealing his “fried chicken oyster” idea from his notebook. Prior to watching that episode, I didn’t know that those chicken parts were called oysters, but I’ve certainly eaten them in the past.

This pasta dish was rich and buttery, peppered with bits of crunchy bacon. Our first bites elicited moans of approval from the whole group. Catalyst served us half portions, which was a great idea because we had to save room for the rest of the other tasty dishes. 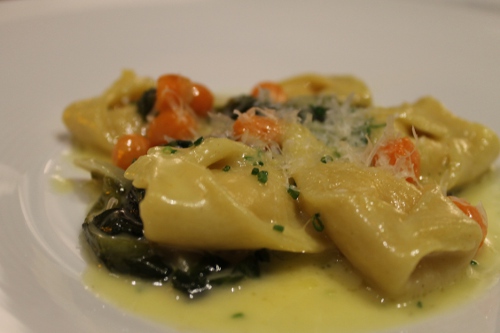 next we had squash tortellini with braised escarole

Catalyst was transitioning to its fall menu and I think this squash tortellini will be a big hit this season. I loved the escarole and the little carrot balls too. 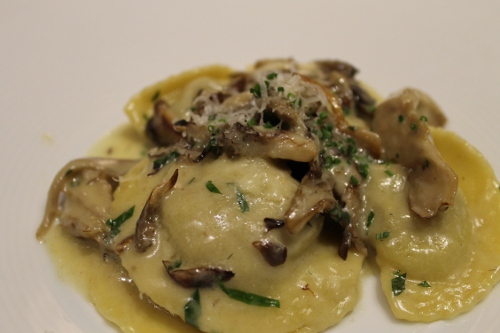 last but not least, we had mushroom ravioli with hen of the woods mushrooms

Have you seen hen of the woods mushrooms before? These are huge, incredible mushrooms and can grow as big as forty pounds. (Do you like my little tidbits of food trivia in this blog post?) This mushroom ravioli dish was spectacular, with and earthy mushroom taste and a buttery sauce. The kitchen staff at Catalyst seems to have a heavy hand with butter, but I’m not complaining about that.

These three pasta dishes were definitely the highlights of our meal. I was already pretty full and glad that I ran a race that morning (I ran the Tufts 10K in 82 degree weather – most fun race I’ve ever ran but it was ridiculously hot. But at least not humid!) – because you know, I carb up before and after running ;) So anyway, I was ready to have dessert when my friends informed me that we’re not done yet, we still have the entrees coming! Eeep… I could only try a bite of each: 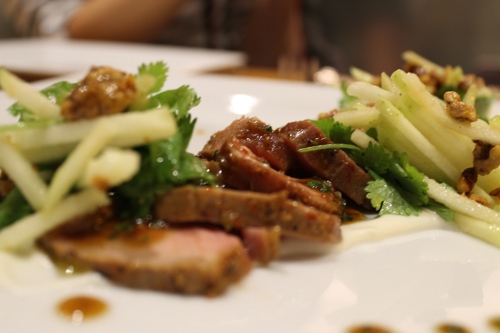 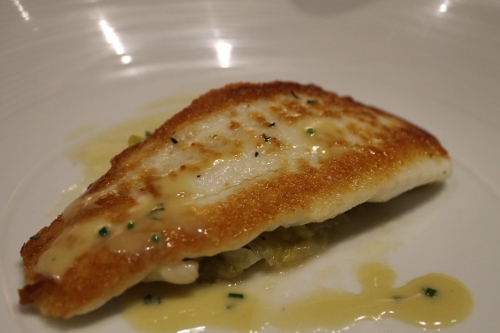 Finally it was time for dessert. I had really high hopes for dessert – imagine if after our wonderful meal we were just served mediocre sweet endings? That would dampen the whole experience. But luckily for us, Catalyst once again shines with the desserts. We were given individual platters of desserts. Platters. 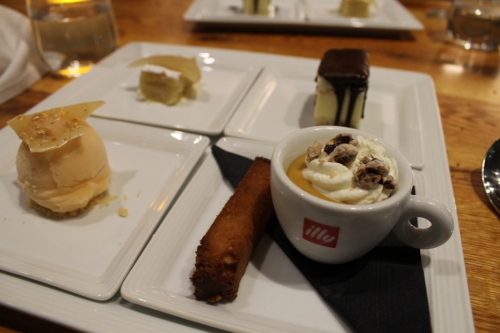 The butterscotch pudding was the table’s unanimous favorite. It was actually butterscotch and passion fruit pudding, and it came with warm pound cake croutons. Remember when I said I didn’t like warm desserts? Yeah, me neither.

I really loved our meal at Catalyst, and I had such a fun time with my fellow bloggers Megan, Elizabeth, Emily, Daisy, Bridget, and Shannon (check out their reviews too!). I will definitely be back at Catalyst soon to try the other dishes and to take advantage of the lounge and fireplace.  And of course for more delightful pasta!

20 Responses to “Delightful Pasta at Catalyst”