It also made me realize that if you have a talent for making good food, then your food will be good, whether it’s gluten free or made with whole wheat flour or sprinkled with zucchini. It’s true, good-for-you food can taste really good. And the folks at Stone Hearth Pizza know that – they offer an evolving menu that uses organic, locally produced, and sustainable ingredients.

On Monday night, after a brisk walk from Harvard Square (the Porter Square location is just about a mile away from where I live), I arrived at Stone Hearth Pizza to join some of my friends: Elizabeth, Daisy, Emily, and Megan. We were invited for a casual dinner and a craft beer tasting, and we all came hungry!

We started with some gazpacho and some parmesan flatbread served with a fantastic dip: 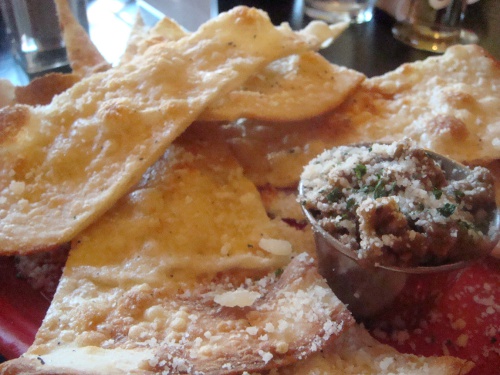 the melanzana spread, which is made with roasted eggplant

I’ve never had a roasted eggplant spread before and I really liked how it tasted: salty, savory, almost meaty. 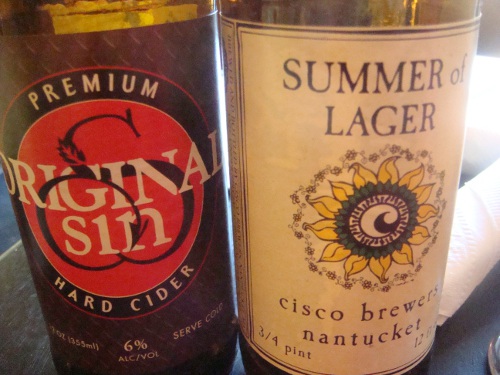 we were also served the first two drinks of the night

We had Original Sin hard cider and Summer of Lager from Cisco Brewery in Nantucket. I’ve admitted that I’m not a big beer drinker but that doesn’t mean I don’t enjoy one every now and then. The Summer of Lager was light and refreshing, and it gets bonus points because it reminds me of my Nantucket weekend last summer.

We had a couple of orders of meatball poppers, which are housemade meatballs stuffed with baked mozzarella then baked (not fried): 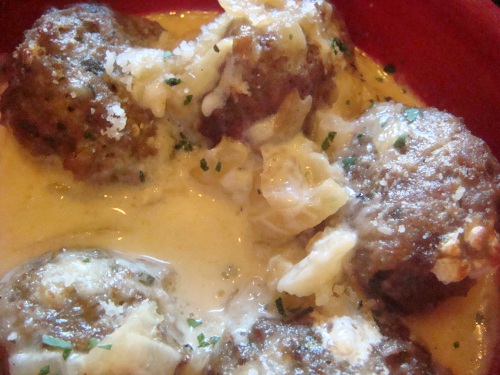 meatballs in a creamy, roasted onion and herb sauce 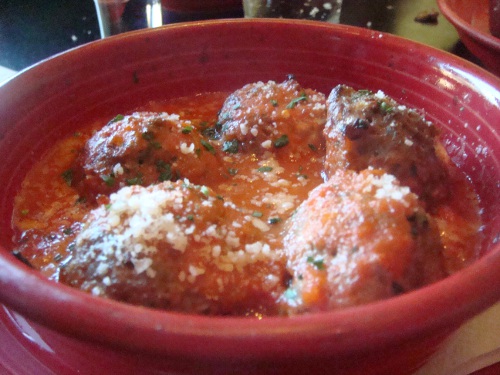 and in a spicy tomato sauce, which I prefer 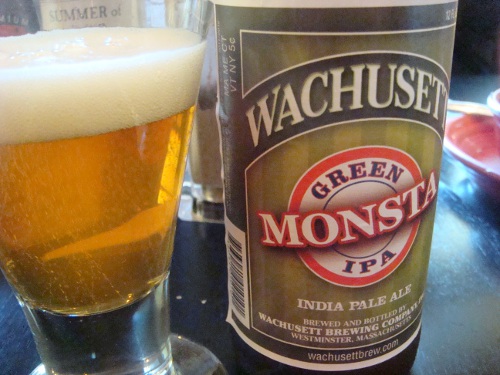 we also tried this green monster

I didn’t really like this Green Monsta IPA – too bitter for me. I prefer my green monsters in smoothie form, which is just a regular smoothie with spinach thrown in. Speaking of spinach… 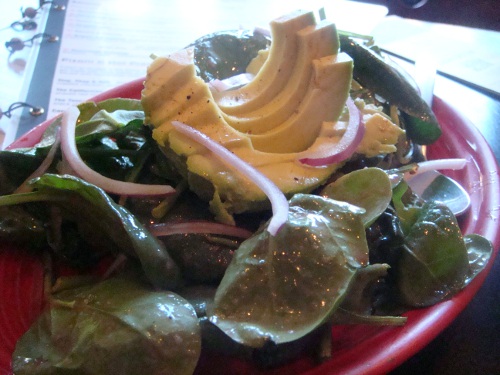 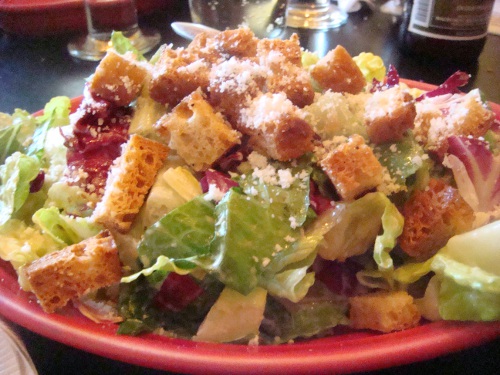 Caesar salad was okay but I miss the anchovies (it's optional)

The best salad of the night was the one that I smartly forgot to photograph: the week’s special of “Spear Me the Details” which featured – you guessed it – fresh and crisp asparagus, which chef and general manager Michael Ehlen said he picked just that morning. 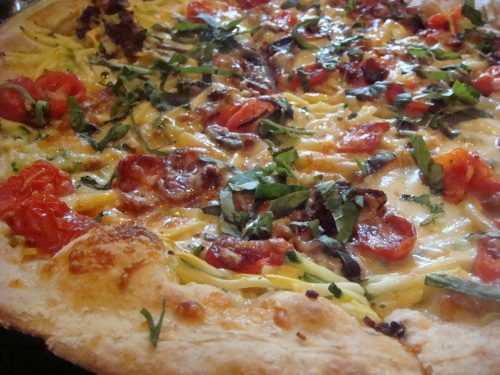 this was the bacon and blue pizza

How to make a bacon and blue cheese pizza healthier? Use a whole wheat crust, add in julienned zucchini and squash, and cherry tomatoes. This pizza was delicious but my favorite was this next one: 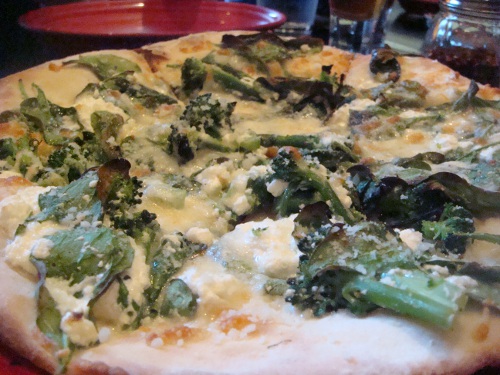 the divine goddess pizza - a white pizza with spinach, broccoli and ricotta cheese

This was made on a gluten free (GF) crust and if I didn’t know it was GF, I wouldn’t have been able to decipher the difference in taste. The crust was thin and crispy, and balanced out the garlicky flavors of the pizza well. 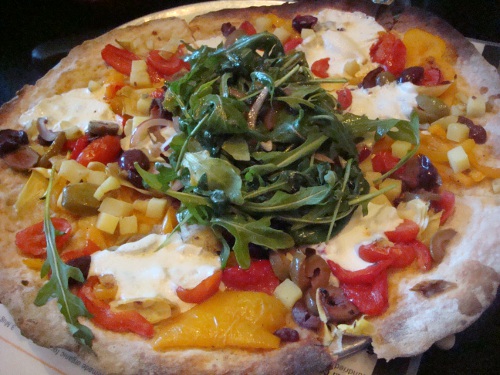 by the time I got to this third pizza, the Farm Fresh on a multigrain crust, I was so full I can only manage a couple of bites

We also tried a beer called Sweet Action from Brooklyn, New York and Once Upon a Time porter from Pretty Things Beer, based in Somerville. 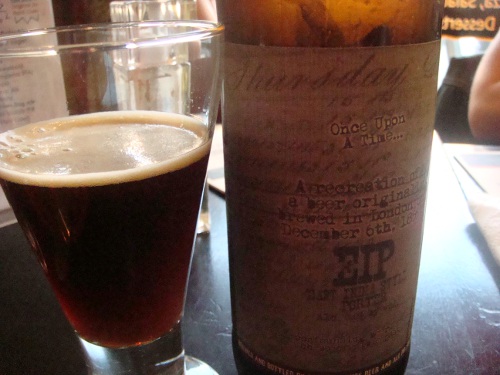 I was surprised by how much I liked this beer. Upon seeing its dark color, I thought it would be rich and heavy like a Guinness, but it was actually light and almost coffee-flavored

We ended the meal with another GF goodie: 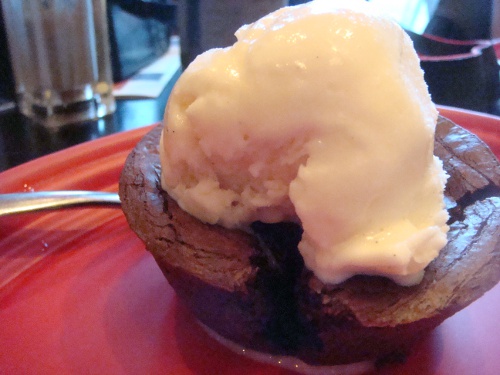 If it’s gluten free it must be healthy, right? That means I can eat the whole thing? I’m kidding, and I didn’t. You don’t have to have celiac disease or a sensitivity to gluten to enjoy this! (But if you do, now you know where to find it.)

We had such a nice time at Stone Hearth Pizza, thanks again to Alex Chamberlain, who does their marketing, and to Elizabeth for coordinating the dinner. If I only knew that a pizza and beer dinner could taste this good, without me feeling greasy nor bloated afterwards, I would’ve been doing it a lot more often. (Now I do, and I know where to find it.) ;)

« Previous
Mango Memories
Next »
Tastings and Tapas from a Food Truck