… to make carbonara the national Thanksgiving dish instead of turkey. 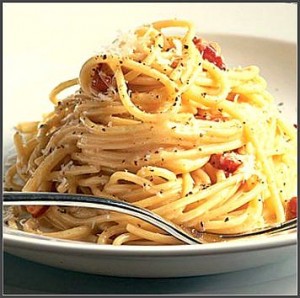 The following is an excerpt from “Tummy Trilogy“:

They brought a dish that their ancestors had learned from none other than Christopher Columbus, who was known to the Indians as “the big Italian fellow.” The dish was spaghetti carbonara–made with pancetta bacon and fontina and the best imported prosciutto. The Pilgrims hated it. They said it was “heretically tasty” and “the work of the devil” and “the sort of thing foreigners eat.” The Indians were so disgusted that on the way back to their village after dinner one of them made a remark about the Pilgrims that was repeated down through the years and unfortunately caused confusion among historians about the first Thanksgiving meal. He said, “What a bunch of turkeys!”

I, like the author, also happen to love spaghetti carbonara (and I’m not a big fan of turkey either) so his campaign has my full support. You can read a short excerpt from the Tummy Trilogy here or here, plus a New Yorker piece where he cheekily admits that the story of the first Thanksgiving could be modified for deep-fried turkey.