posted on September 9, 2009 by Bianca Garcia

I have a confession to make: despite being the TV addict that I am, I’ve never since an episode of The Sopranos. Not even one. Until last week.

The boyfriend and I decided to watch the whole series from Season 1, Episode 1, and now I am hooked! Late bloomer, I know (very late bloomer) but no wonder people got obsessed with this show! I love mafia movies, and I also love… Italian food. Yes, food. Have you noticed how they are always eating in that show?? So on Monday, the boyfriend and I decided to actually make real Italian food and stay in for another night of The Sopranos on DVD. 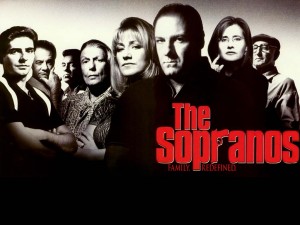 We made pasta with meat sauce – with marinara sauce made from scratch! We used whole wheat rigatoni, and while the pasta was cooking, started sauteing ground turkey and spicy Italian chicken sausages in one pan, and fresh white mushrooms in another. The marinara sauce (we eyeballed everything) had  garlic, onions, shallots, red pepper flakes, plum tomatoes, tomato paste, and dried oregano, and after simmering for about 20 minutes, we added the meat and red wine, then topped it with fresh basil and lots of shaved cheese. I also made caesar salad dressing from scratch! I whisked together anchovy paste, dijon mustard, worcestershire sauce, lemon zest, lemon juice, olive oil, salt and pepper and real grated Parmesan cheese (none of that powdery stuff for us). It was all very yummy. A bottle of Prosecco later, and a few episodes of the Sopranos, and it was the perfect Italian night.

« Previous
For The Love of Pig
Next »
Ideeli.com Exclusive Invite