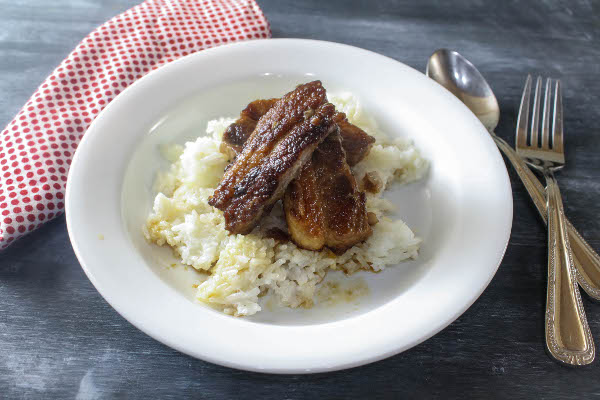 It’s been three years since I wrote about adobo.

Three years ago, my family’s recipe for pork and chicken adobo was published in Molly O’Neil’s One Big Table

. I was so immensely proud – adobo is the most Filipino of all foods. It’s the unofficial national dish of the Philippines, so deliciously ingrained in our culture, that just the thought of the fragrant stew can make any Filipino think fondly of home. This is what I said before, and it’s still true now:

My family’s go-to dish, like so many other Filipinos living abroad, is adobo. It does not matter that the dish takes hours to cook and the smell of it stays in the apartment for days – it brings us a taste of home. All Filipino families each have their own recipes for adobo. It’s any meat or any combination of meats that is braised and simmered in vinegar, soy sauce, lots of garlic, black peppercorn, and bay leaves. Every family claims that their version is the best.

A couple of weeks ago, I made adobo again with Dan from The Food in my Beard. We’ve been talking about cooking Filipino food together for months (maybe years?) and we finally made a trip to Asian grocery store H-Mart to buy the ingredients…  although all the ingredients we used are actually available in most grocery stores, and not necessarily a specialty one (it was also a nice excuse to have lunch there). 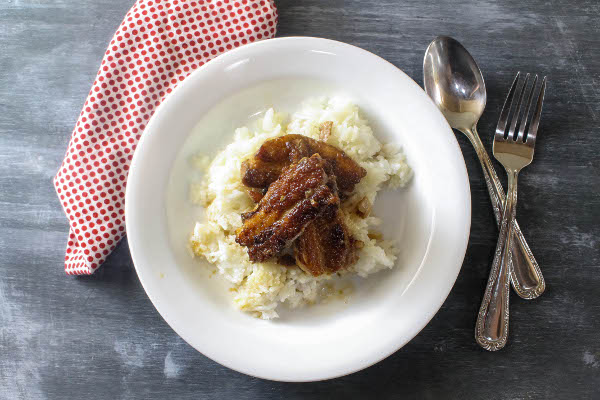 We made Pork Belly Adobo and Vegetarian Lumpia (lumpia recipe to be posted later this week) and spent a few hours braising the unctuous cut of meat. The Pork Belly Adobo is a very fatty, high-calorie dish, and it’s certainly not something you eat every day, but it is worth the indulgence. After hours of braising, the pork belly transforms into meltingly tender meat, filled with the garlicky flavors of the sauce. A sear on a cast-iron pan after braising creates a nice brown crust and further seals in the flavors.

Adobo is traditionally served with hot, fluffy white rice. And on that note, you should know that in the Philippines, rice is served for breakfast, lunch, and dinner. Snacks and desserts are sometimes rice-based, too. Also: Did you know that Filipinos eat using a spoon and fork? Not chopsticks, not knife and fork, just spoon and fork.

If you can’t find pork belly or want to try another cut, you can look for country style spare ribs in your grocery store (look for something that has even just a little bit of fat, because that really contributes to the overall flavor). You can substitute chicken (I recommend bone-in, skin-on thighs) or beef (spare ribs), and you can add vegetables (spinach, green beans). But we wanted to create the traditional version so we stuck with pork belly, and we wended up with a dish that could’ve been served straight up from my family’s kitchen in the Philippines. 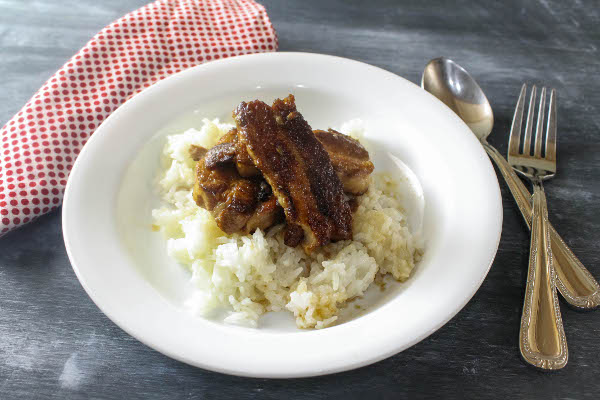 Some versions of adobo have coconut milk, some versions omit the soy sauce altogether, some versions have added sugar or hard-boiled eggs or chilis. This version is my family’s but it’s also a pretty classic preparation (and the best recipe out there). If you ever make it, I’d love to hear about it!

Dan also posted about the adobo on his blog, check it out!