And you all know what I do to make things special, right? I break out the Nutella.

I didn’t just make Nutella rice crispy treats. I made rich, fudgy brownies as a base. Then topped it with rice crispies. Mixed with Nutella. And milk chocolate. And marshmallows. It resulted in what I now call the ultimate Crunchy Top Brownies. 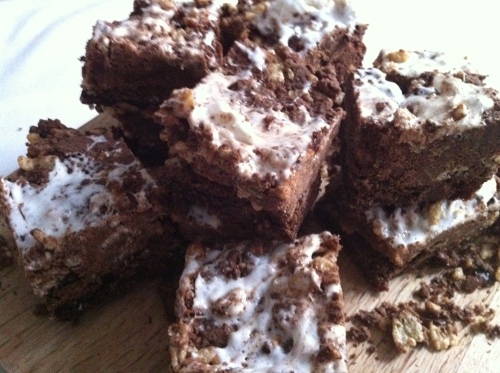 I was inspired by the Peanut Butter Cup Crunch Brownies Bars from Brown Eyed Baker, which were actually the Better-Than-Crack-Brownies from How Sweet It Is. The closest I’ve come to crack were some pomme frites, but I trust those lovely ladies. Anyway, Dan is allergic to peanut butter so I omitted all the peanuts in the recipe, swapped in Nutella for peanut butter, increased the rice crispy portion, added marshmallows, and melted more marshmallows on top. 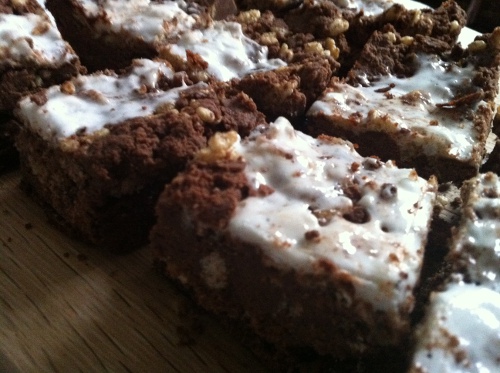 I thought that for this to be considered a rice crispy treat, it had to have marshmallows

1 batch of your favorite brownie recipe (I like Barefoot Contessa’s Outrageous Brownies or when I’m lazy, I turn to Ghirardelli box mix)
1 1/2 cups milk chocolate chips
1 13 oz jar Nutella
1 cup mini marshmallows (this is what I used but I suggest increasing this to 2 cups), plus more for melting on top
1/2 tablespoon unsalted butter
2 cups Rice Krispies cereal

Prepare brownie mix according to direction, but instead of just using one pan, use two 8×8 baking pans lined with parchment paper. Bake brownies for 5 minutes less than the recipe states.

When the  brownies are almost done, melt the chocolate chips, Nutella, and butter in a large pot over medium-low heat. Stir in the cereal and mix everything together until the rice crispies are evenly coated.

Refrigerate for at least 2 hours before cutting into squares. You’ll end up with 32 squares (16 from each pan). 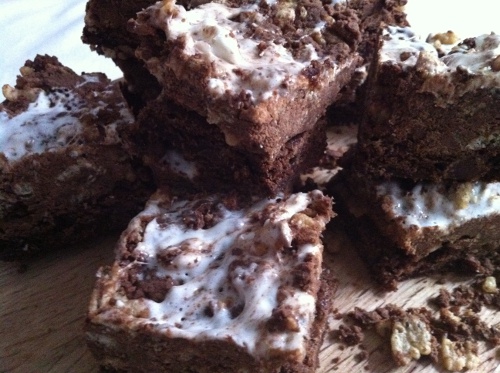 each crunchy square would be very sweet, so I suggest you have a glass of milk ready

One thing to note: the rice crispy layer was crunchier than I anticipated, so after cutting the brownies into squares, it started to separate from the brownie base. This is why I suggest increasing the marshmallows in the mixture to make it chewier and stickier. 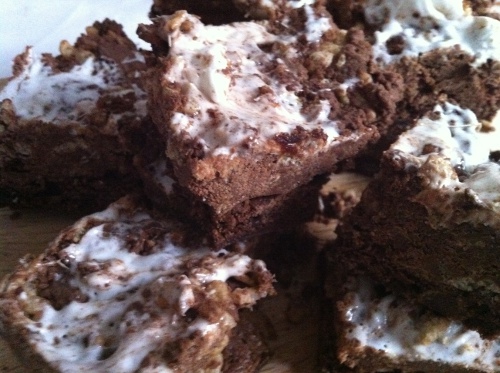 they’re a little messy to eat, but each crumb is worth it

I may have given Dan early onset diabetes but I think these brownies were well-received!