A Night of Champagne and Drinks

… is something we all need once in a while.

A few nights ago, I went to a Champagne and Sparkling Wine Tasting with Megan, Meghan, Daisy, and Jen. It was a beautiful night as Megan and I walked from the T stop, with clear skies and the promise of warmer spring weather coming soon. The nice walk and the idea of champagne just few minutes away  put me in a buoyant mood so as we entered Morton’s at the Seaport, I was all smiles!

The event was situated at one of the private rooms and we waited a few minutes as other guests settled down. While I’ve been to wine tastings before, I’ve never been to a champagne tasting. And I do love sparkling wine – especially in mimosas and belinnis. 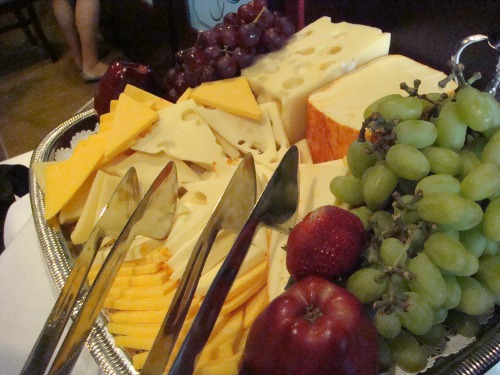 We nibbled on some cheese and fruit while waiting for the event to start... 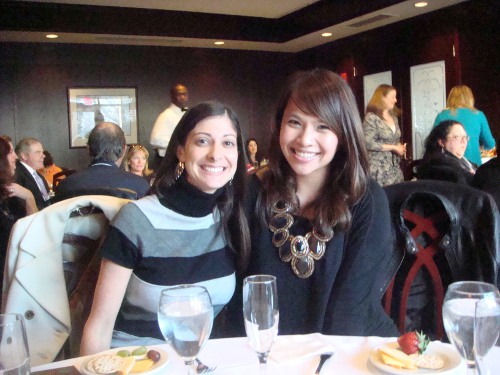 ... and also took some people pictures so that my blog will have more than photos of food and drinks ;) That's Daisy and me 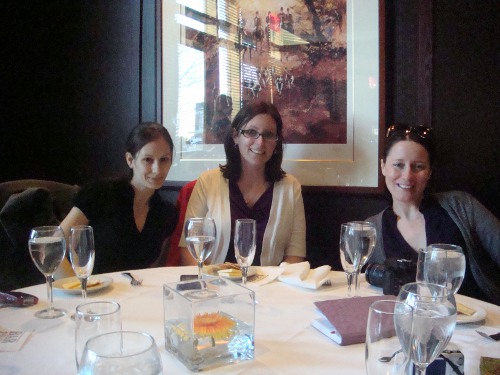 and the other lovely ladies Megan, Jen, and Meghan 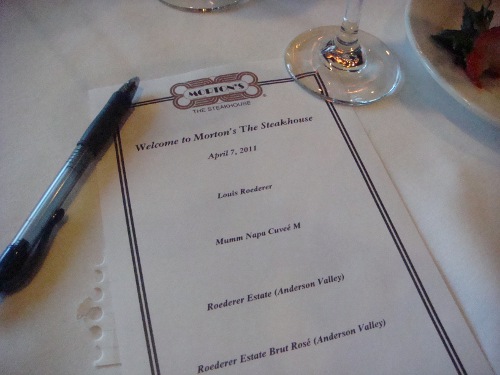 Then the drinks (and food) started coming! We tasted four different sparkling wines. The first one was a Roederer Estate Brut, which was fresh and crisp, not as sweet as I like. The second was a Louis Roederer Brut Premier, which was similar to the first glass, but to me tasted slightly more acidic. 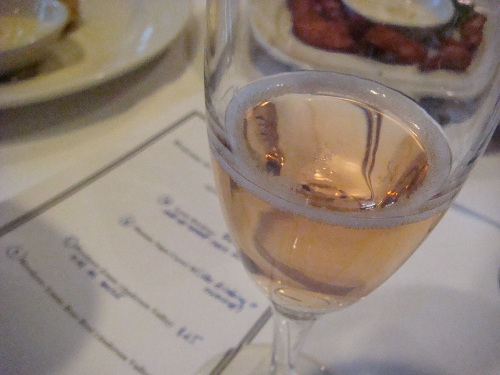 The third wine was a Roederer Estate Brut Rose, which was smooth and fruity. Each wine was actually prefaced with a short introduction and I learned that for the subtle pink tinge is an effect of the addition of a small portion of Pinot Noir. The last glass was a Mumm Napa Cuvee, which was actually the sweetest (and thus my second favorite). I can almost taste sugar, and I imagine this would be perfect for a mimosa. 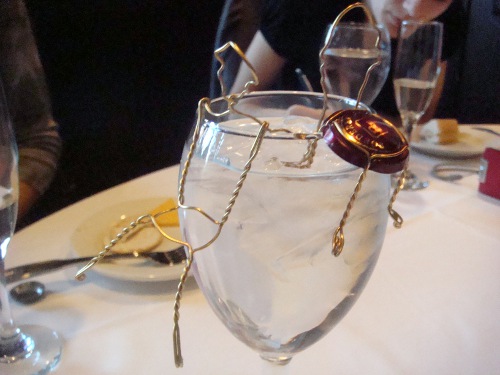 In between the sparkling wine tastings, we had some of Morton’s signature appetizers: 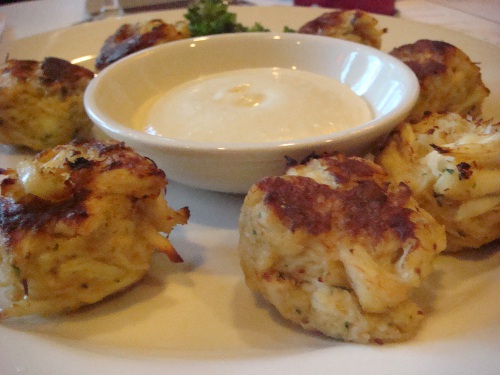 lump crabcakes that were pure crab! 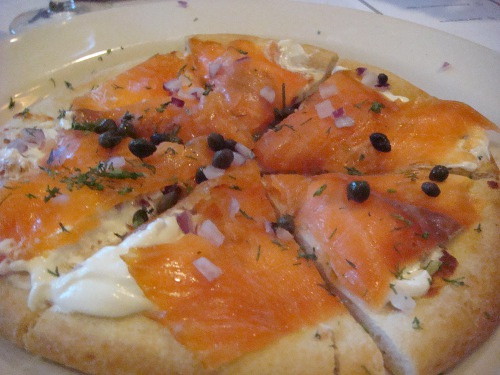 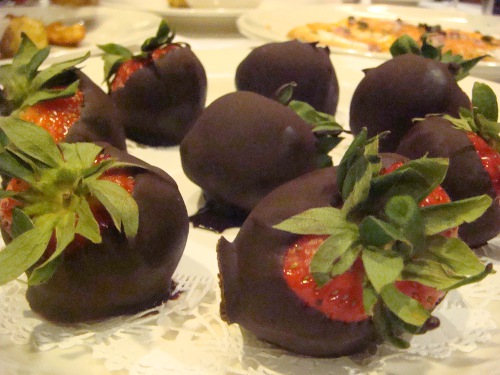 We had a nice time at Morton’s tasting and learning about the different wines, but admittedly the whole event was a little drab. It was the great company that made the night special! However, we are willing to give the Morton’s Tasting Series another chance, especially because future events include individual evenings for mojitos, sangria, and margaritas. I like all these drinks, but sangria holds a special place in my heart so maybe I’ll be back for that.

And because the four glasses of champagne weren’t enough, we all decided to get more drinks (except Jen who had to head home earlier). We drank at Drink, of course. We are all Barbara Lynch groupies and so we were eager to visit a bar dedicated to the craft of the cocktail. 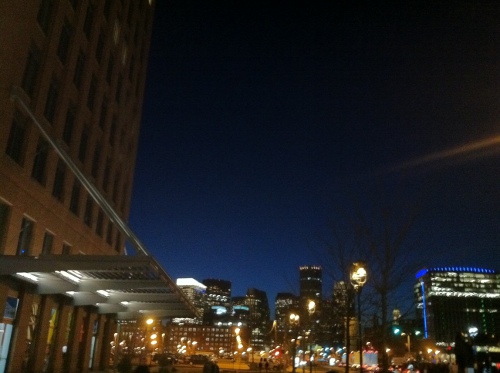 the Fort Point area is a neighborhood I don't get to explore often enough, but whenever I'm here I always enjoy myself 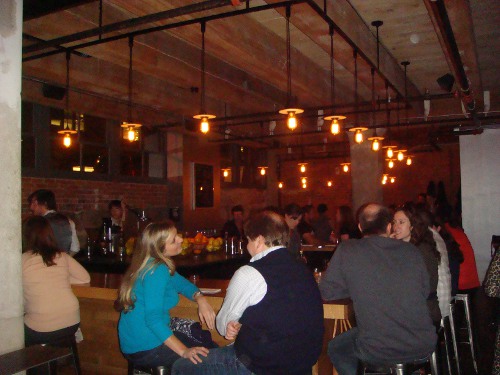 Drink sits under another Barbara Lynch restaurant, Sportello. But unlike the bright austere counters at Sportello, Drink is warm and dark and very inviting

The whole concept of Drink is that you can tell the bartender what kind of drink you want (“something sweet with vodka”) and he or she will craft a special cocktail for you. There is a short list of cocktail specials, and of course you can order “traditional” drinks too, like the Dark and Stormy that Meghan ordered (they make their own ginger beer at Drink). 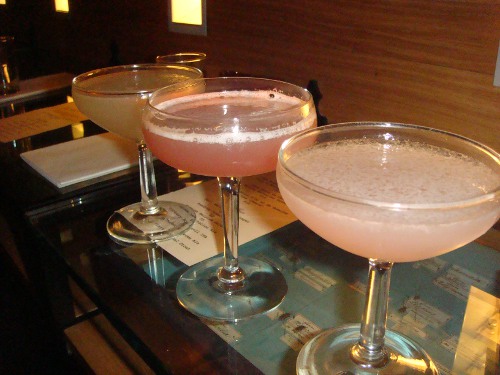 I’m kidding – those cocktails belong to Daisy, Megan, and me.

Do you notice the countertop at Drink? Look closely at what is beneath the glasstops… 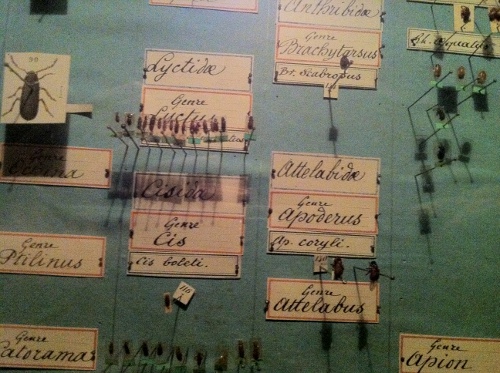 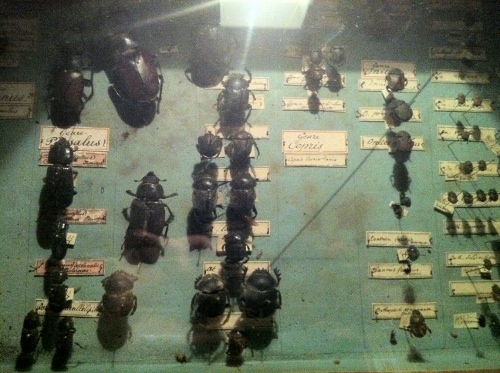 I am not exactly sure why there are dead bugs there and while we all shuddered when we first noticed them, we eventually forgot them, thanks to the luscious drinks and the fun conversation. Champagne and drinks make for a fun girls night!

10 Responses to “A Night of Champagne and Drinks”