First it was cupcakes. Then it was bacon. Then it was frozen yogurt. Now food trucks are sweeping the nation, one fast griddle at a time.

While Boston has a burgeoning food truck scene, these trucks – whether gourmet or grease meals – are widely prevalent in other big cities like New York, LA and DC. Here in Boston, we have the more popular ones like Clover Food Lab, Filbelly’s and M & M Ribs. There are also dozens of little oil-filled machines that bring breakfast and lunchtime happiness around the city: at Overdrive, the advertising agency that I work for, my co-workers are loyal to Mr. Snack. He’s like the pied piper of food, with his distinctive horn sounding out the call to his hungry patrons.

Last Sunday, I checked out Boston’s 1st Annual Food Truck Festival near the SOWA Open Market. The lines were ridiculously long; the organizers underestimated Boston’s foodies because not only did some of the food trucks ran out of food, but the whole event was packed! 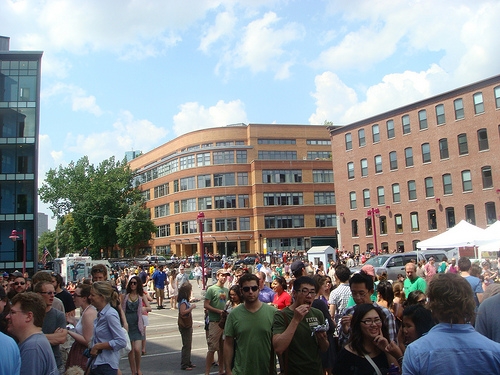 one big open parking lot filled with a lot of people, some stalls in the middle, and few food trucks 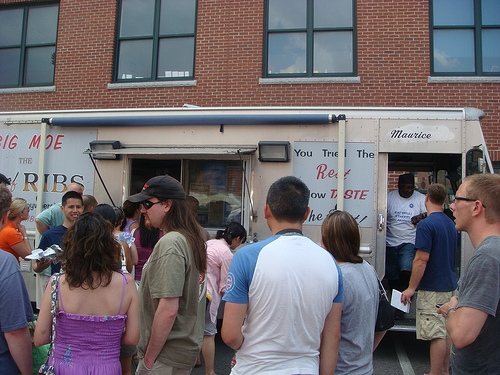 I didn’t want to give up since we were there already – and I really wanted to try the soul food at Fillbelly’s – so my friends and I decided to brave the long lines. We fueled up with some Del’s frozen lemonade (they ran out of lemonade too but quickly replenished their supply) and a chocolate zucchini cake from the 3 Little Figs stall: 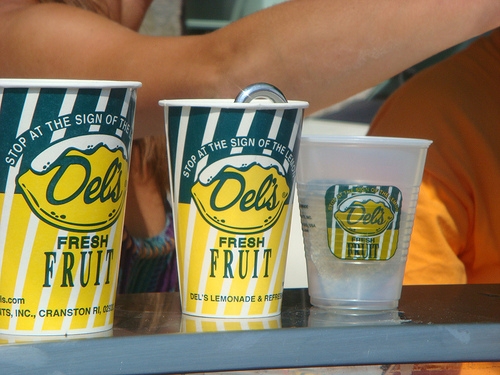 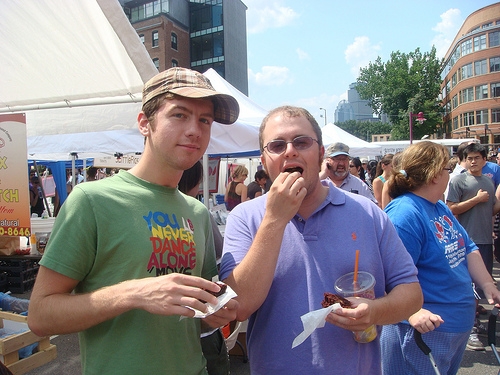 while I wandered over to this: a Taza chocolate bike stand

We waited in line at Fillbelly’s for more than an hour (I spent a lot of time waiting for food all weekend), placed our orders, waited a few more minutes, then we were told that they ran out of food too. We ended up getting 2 little bosilitos (homemade empanadas) instead of the 6 we ordered, and it actually didn’t taste that good…

However, there was one very good thing about the Food Truck Festival: I discovered Roxy’s Gourmet Grilled Cheese.  I didn’t actually get to try it because they weren’t selling food yet, but I did get to talk to James DiSabatino, owner and chief cheese griller. He said they are set to roll out the trucks in the Fall; they’re just ironing out the gourmet grilled cheese menu and finalizing locations. When I asked,  “why Roxy?” James said Roxy is the goddess of grilled cheese. (And no, it is not named Roxy after the famed Boston club.) I believe him because I like all things pertaining to cheese, and having a goddess of grilled cheese just seems too good to not be true. 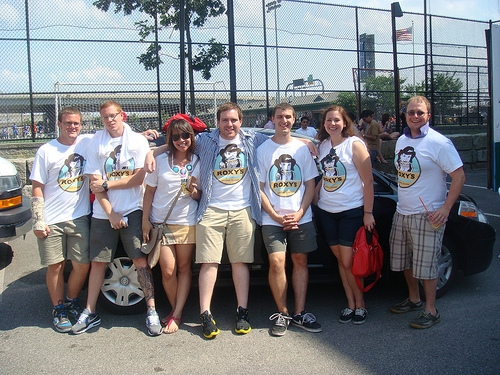 me with the Roxy’s Grilled Cheese crew

As food trucks gain popularity, I wonder how it will affect a city’s restaurant scene. After all, food trucks are essentially mobile restaurants. And they can cater to a variety of tastes as well, from healthy vegetarian to hearty comfort food, from ice cream to cupcakes, as a roach coach or a tricked out truck. Food trucks though, unlike sit-down restaurants, are cheaper, quicker and just seems more… fun.

According to this article on Boston.com, City Council president Michael Ross believes that restaurants are transformative devices  for neighborhoods, and “these trucks are a natural extension of that.” He mentions the potential for sustainability and the ability to support local communities and farmers. This means that food trucks are not only fun for the foodies, they are good for the cities as well.

If it is indeed the next hot trend, I’m looking forward to lining up for more.

9 Responses to “Are Food Trucks the New Food Trend?”