Dinner at Oleana… And the Little Scallop That Could

Do you have one of those restaurants that is so close to where you live, that you’ve heard great reviews about, but for some reason never get to try yourself? Oleana was that restaurant for me. Up until a few days ago, I haven’t had the pleasure yet to dine at chef Ana Sortun’s award winning restaurant. I always think, it’s just a few neighborhoods away, and it’ll always be there, so I sort of kept pushing off my first visit. Then I realize that I’ve actually lived in Cambridge for seven years already and I still haven’t been to one of its most treasured restaurants!

Fortunately, I was able to remedy that a few days ago. And I encountered some very inventive dishes in a cozy setting that made me and my friends feel so at home. Oleana lived up to my high expectations, and more.

We started with a few meze, or small plates that were meant to be shared. There were four of us, and we chose one appetizer each. 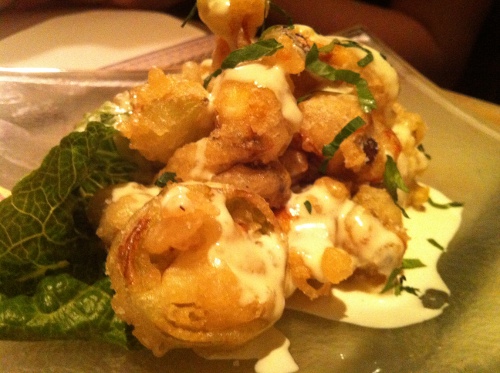 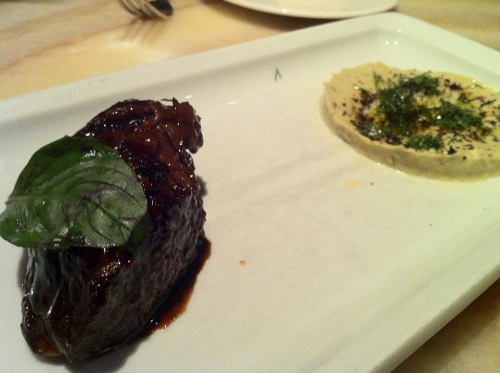 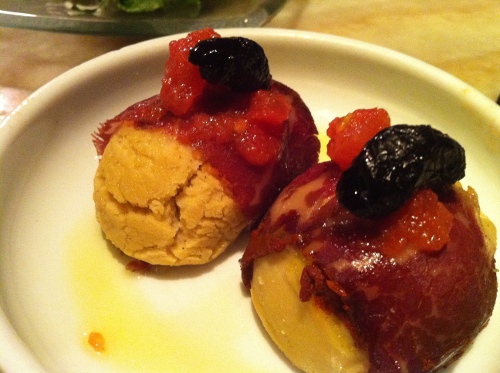 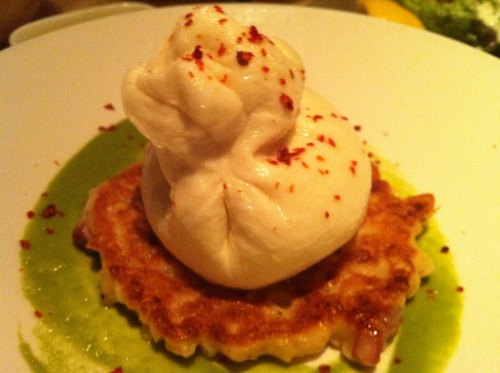 special of the night: homemade burrata

I thought the hummus would be amazing, but compared to the other appetizers, it was a little lackluster. I really like the burrata though. Burrata is an Italian cheese, and the outside shell is fresh mozzarella while the inside is a soft, creamy, mozzarella-and-cream mixture. It was served on top of a root vegetable pancake and a garlicky sauce. I could’ve eaten the whole glob myself, but thankfully I was in public.  And didn’t want my dining companions to hate me.

For the entrees, we all liked the same things, so we ordered two of the same dish. Let me point out here that the servings at Oleana are perfect human servings, not the gargantuan monster plates that other restaurants want us to gorge on.  This by itself wins some goody points from me. We ordered two lamb entrees and two scallop entrees: 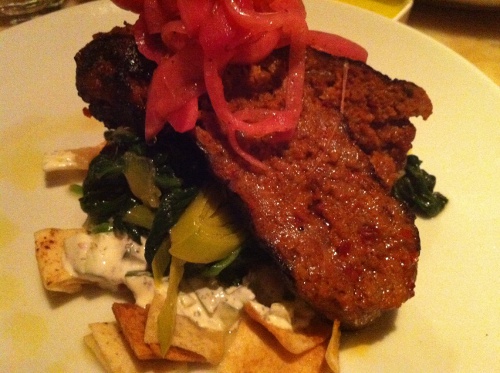 Vermont lamb with Turkish spices, pide, and everything green with garlic and yogurt

My friends let me taste this and it was very good, but we were all a little thrown off by the texture. It tasted like some sort of sausage/meat loaf. But it was so flavorful that my two friends promptly forgot about the strange texture and enjoyed the whole plate. You can’t really see it in the picture above but it was served on top of some spiraled greens (the “everything green”) with the best garlic yogurt sauce.

I ordered one of the night’s special entrees: 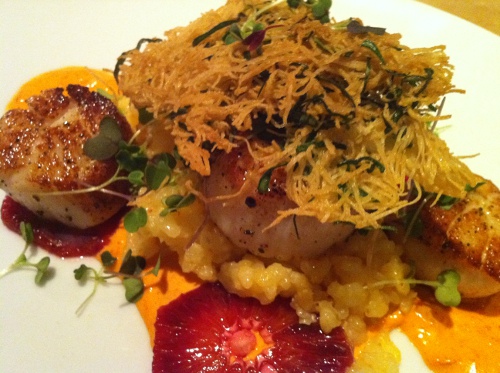 seared scallops with saffron risotto and blood oranges, topped with a kadayif, or a crispy phyllo nest

Let me explain! So about 10-15 minutes after eating the entrees (we were taking our time, talking and enjoying the atmosphere, so at that point we still haven’t even ordered dessert), I started to feel really nauseous and cold. I knew this feeling very well, having had some unfortunate bouts with seafood before. Some people say that it takes a few hours for food poisoning to kick in, but in my experience, it only takes about 15 minutes after eating the bad seafood for me to immediately feel sick. My companions actually finished the rest of the scallops on my plate, and none of them felt weird, so I thought – with my luck – that I ate the little scallop that could. So I stepped out for some fresh air, and after a few minutes of standing outside in the freezing cold, I actually, magically, felt better. I splashed some cold water on my face, and returned to the table and surprised everyone with my mystical healing.

So just to make this clear, I did NOT get food poisoning. But for a scary 10 minutes, I felt extremely nauseous. I don’t know if it was the scallops, or the mussels, or my drink, or maybe my sheer exhaustion from a stressful week, but I really thought I was going to have another unpleasant seafood experience. Thank God I didn’t. But whatever it was, it was enough to make me panic a little bit and for my friends to worry.

Why is this relevant? Because this experience was actually what cemented Oleana’s place in my list of restaurants to visit again and again. When our server Shelly saw me standing, cold and pale and feeling sick, she immediately went into mother-mode. She brought me a glass of water and really took care of me, and even alerted my friends when I made it to the bathroom (after going outside for fresh air). The manager was also very concerned, and the kitchen staff asked me about my allergies and assured me that there wasn’t anything in the dishes I ate that was on my allergen list.  Everyone was extremely kind and helpful.

After I assured everyone that I was indeed feeling fine (and a little embarrassed over all the commotion), we ordered dessert. I think I probably rallied myself out of getting sick, just to be able to try the desserts. I’m not going to lie, but I’ve been thinking of the acclaimed desserts days before our dinner reservation. We ordered two: 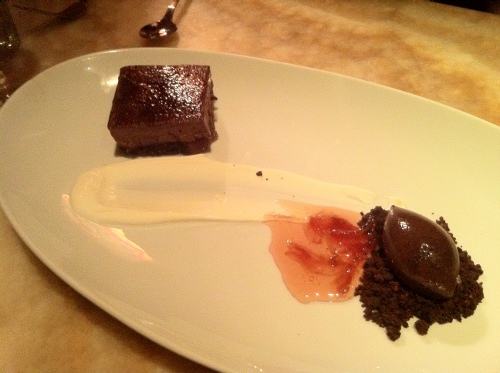 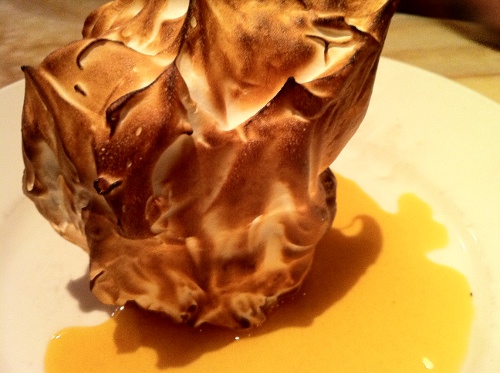 The desserts were phenomenal! I loved the baked alaska, with the sweet coconut ice cream and passion fruit sauce. There were chewy pieces of coconut at the base of the alaska, and it was pure goodness.

The kitchen also sent out an extra dessert: 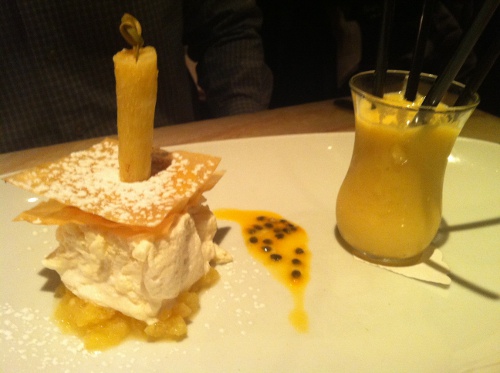 It was really nice of the Oleana staff to do this (maybe I should be almost-sick more often? just kidding) but when we got the bill, we were told that the whole dessert course was on the house. Again, this was much, much appreciated. I know they probably felt bad because of my scallop scare, but it did turn out to be just a scare. The service was topnotch to begin with, but we all left feeling warm and fuzzy. And with plans to come back soon! Next time though, I will probably just order a couple of meze plates and dessert :)

I’m glad I was finally able to eat at Oleana, and had a memorable dinner too, thanks to the little scallop that could (but didn’t) and to our lovely server Shelly. And the food was really delicious. It was a dinner I’ll always remember.

What’s the one restaurant you’ve been meaning to try, but still haven’t?