Did you hoard cans of pumpkin puree during the fall and now have cans sitting in your cupboard, mocking you for your paranoia that there will be another pumpkin shortage this year? If you didn’t but would still like a recipe for a delicious pumpkin take on a traditional Filipino dessert, read on. Today I have a guest post from one of my cousins, who has become our family’s resident chef and caterer. He prepared a dessert that uses some of my favorite ingredients: condensed milk, egg yolks, and pumpkin puree.

I’m Atoms, a former chef in a hotel here in the Philippines and now teaching students how to prepare and cook all kinds of food. I grew up loving to eat because of my mom who always cooks the most delicious things for us, especially during holidays and other special occasions. When I was young, I used to say that my favorite hobby is eating – that is actually true until today. I always visit different restaurants and join various cooking competitions to further enhance my skills and knowledge in cooking. As I grew older, I learned to cook all sorts of cuisines, and that has made me become the chef of the family. 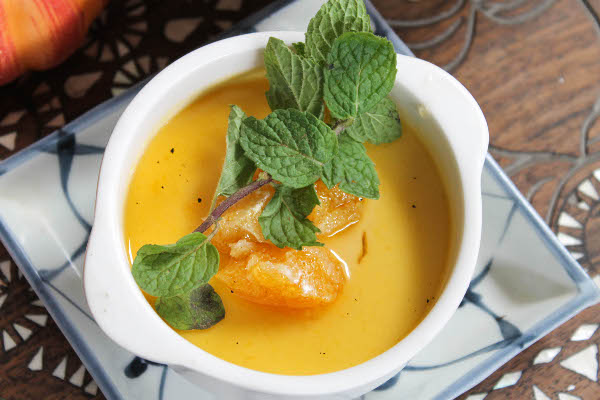 When we had our family reunion last Christmas, I told Bianca that I will give her some Filipino recipes that she can cook for her blog. I promised her that I will send her a recipe of a dessert that I usually do: Pumpkin Leche Flan. As soon as she heard “pumpkin” and “leche flan” she immediately asked me if I can do a guest post for her blog. Of course I said yes, anything for my cousin. The day before Bianca left for Boston, I prepared lunch for our family (Editor’s note: we had pork barbecue, Korean jap chae, giant bowls of salads with hard boiled eggs and tomatoes, and pesto chicken. It was all glorious) and I made this Pumpkin Leche Flan for dessert.

In the Philippines, flan is known as leche flan (the local term derived from the Spanish dessert flan de leche, translated as “milk flan”). Leche flan is a richer version of the traditional Spanish flan because it is made with condensed milk and more egg yolks. It is usually steamed over an open flame or stove top, although it can also be baked. 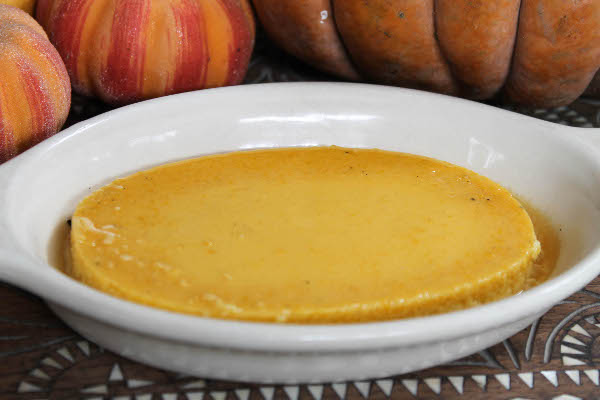 Leche flan is a staple in celebratory feasts. It is usually served on special occasions and big gatherings like fiestas, Christmas day, and birthdays. But it is also good on ordinary days…

Calabaza (spelled kalabasa in the Philippines) is a term that can be applied to a variety of gourds, but it is our Filipino word for pumpkin.  Pumpkin is widely cultivated throughout the Philippines as a vegetable produce, and is a common ingredient in native sweets.

I hope that you will like the recipe. Thanks for having me as your guest.

If you will be using an oven to bake the flan, preheat oven to 300 degrees F.

Prepare the caramel syrup. Combine the water and sugar in a saucepan. Stir in until it boils and turns into a light golden brown color. Pour half of the syrup into the mould/s. (In the Philippines, we use a llanera, an oval shaped aluminum mould. But you can use ramekins or a 6x6 baking dish.) Set the rest of the syrup aside.

Pour the mixture into your mould or baking dish and cover with foil. If you are using a steamer, steam it for 20 minutes.

If you are using an oven, place the baking dish in a larger roasting pan, and fill the surrounding area with hot water, until the water reaches approximately ½ of the height of the dish with the flan.  This method is called bain-marie or water bath. It ensures that the flan does not end up with a pudding-like texture. Cook flan for 40-45 minutes, until firm.

Let cool and refrigerate until right before serving.

If you are using little ramekins, divide the rest of you remaining syrup over the leche flan before serving. You can garnish with mint leaves and shards of candied sugar, if you like.

If you are using a mould or baking dish, run a thin knife around the edges of the mould to loosen the leche flan. Then place a platter on top of the mold and turn it upside down. Pour the rest of the syrup over the flan and your pumpkin de leche flan is ready to serve. 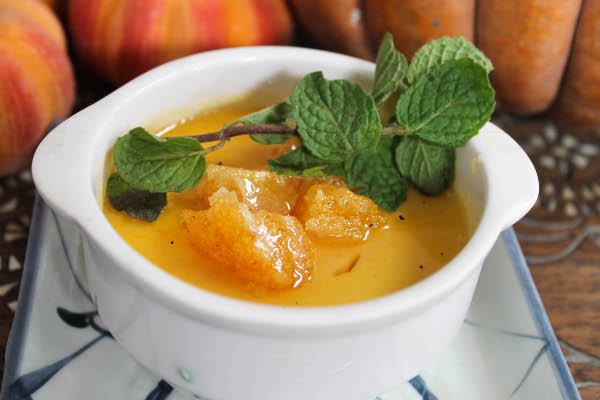 Big thanks to my cousin for sharing his recipe. And thanks to my dad, too, who took the first photo on top (bird’s eye view). This blog post is brought to you by the Garcia family…

Don’t forget – there’s still time to enter my giveaway for tickets to the Boston Wine Expo and a few bars of Filipino chocolates!