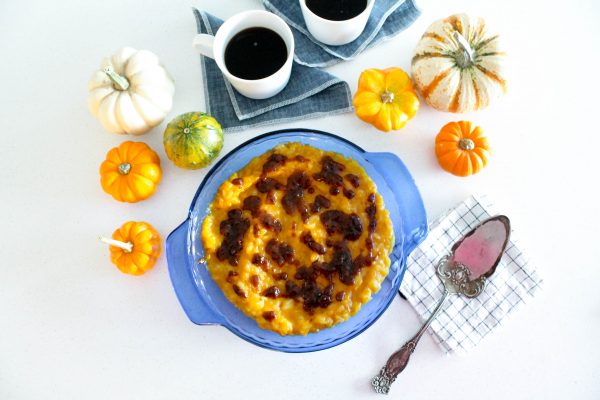 I can’t remember a Garcia family gathering in the Philippines without some sort of biko. Birthdays, holidays, fiestas, reunions. Always a flurry of movement around the dining table, hands darting in and out to grab a plate or spoon or mug. At the Garcias, there’s always coffee, fried chicken, sometimes pato (duck), sometimes coconut sherbet, but always biko.

Biko is a sweetened rice cake, made with sticky rice, coconut milk, and sugar. My dad’s family is from Pampanga, most often dubbed as the culinary region as the Philippines, and whenever we are there, I am in food heaven. They make biko with kalabasa (pumpkin) and it is insanely delicious. I’ll often cut a little (big) square for myself, and then minutes after finishing it will go back for seconds. 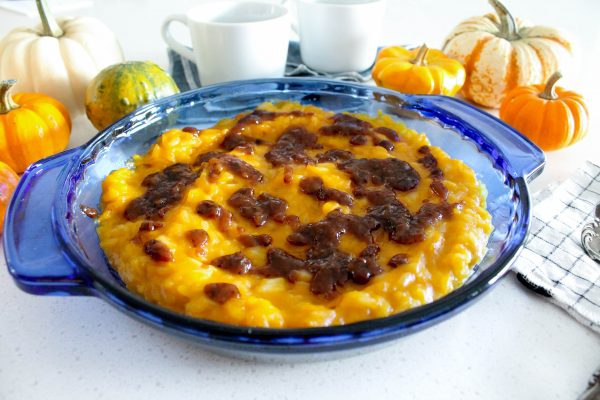 Biko is often served as merienda (snack) but it is also common as breakfast or dessert. It’s sometimes topped with latik, a coconut caramel. I love the consistency of the sticky rice, so dense that it’s sliced instead of scooped. I love the creaminess of coconut milk, which pairs so nicely with mellow pumpkin. I love that biko reminds me of family, always.

I’ve been wanting to try my hand at making biko at home but kept putting it off, thinking it was going to be a complicated process and that it will not live up to the biko I’ve been eating since childhood. But after watching ULAM the movie the other night, my craving for Filipino food was INTENSE, so I finally attempted my first plate.

*By the way, if you can, I urge you to find a screening of ULAM. Ulam means main dish. It’s a food documentary by Alexandra Cuerdo about the rise of Filipino food across America.*

I asked my dad for his biko recipe and I was overjoyed to find out that 1) it’s a very simple recipe that anyone can easily follow, and 2) the biko turned out sooooo good, even if I used canned pumpkin puree (instead of a freshly cooked and mashed pumpkin or squash).

I made the coconut caramel to top it, which turned out too thick, but still pretty darn delicious (I mean, it’s hard to go wrong with coconut cream and brown sugar). If you’re longtime readers of this blog, you’ll know that my dad and I share the same sweet tooth, but both of us agree that the caramel was not necessary. Both of us also agree that biko is good served warm, cold, or at room temperature, for breakfast and snack and dessert. 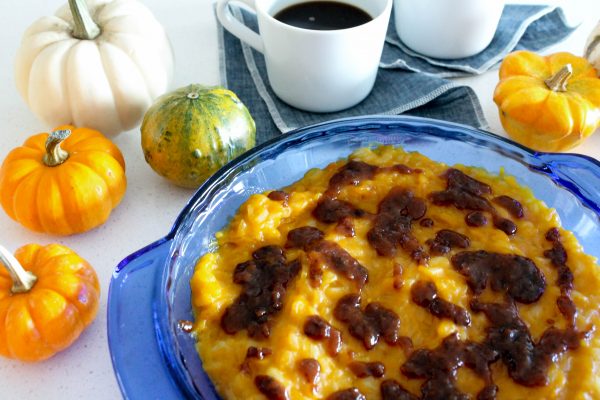 Take note that coconut cream and coconut milk are different. Both are often sold in cans in the Mexican aisles of grocery stores.

Instead of using canned pumpkin puree, you can use fresh pumpkin, butternut squash, or kabocha squash as well. Just boil until softened then mash.

You can easily double the recipe and it will still fit into a standard 9-inch pie pan (or you can use a square pan). You can also adjust the sweetness by adjusting the sugar.

If you’re interested in more pumpkin recipes, I have a lot! Check out Creamy Pumpkin Soup, Pumpkin Cookies and Butterscotch and Chocolate Chips, Pumpkin Mac and Cheese and Linguica, Pumpkin Banana Bread, Pumpkin Leche Flan to name a few.

« Previous
Weekend in Charleston, South Carolina
Next »
Dish of the Week | Rib Roast at La Brasa

One Response to “Pumkin Biko”