Some Terrific Sushi and Other Good Eats 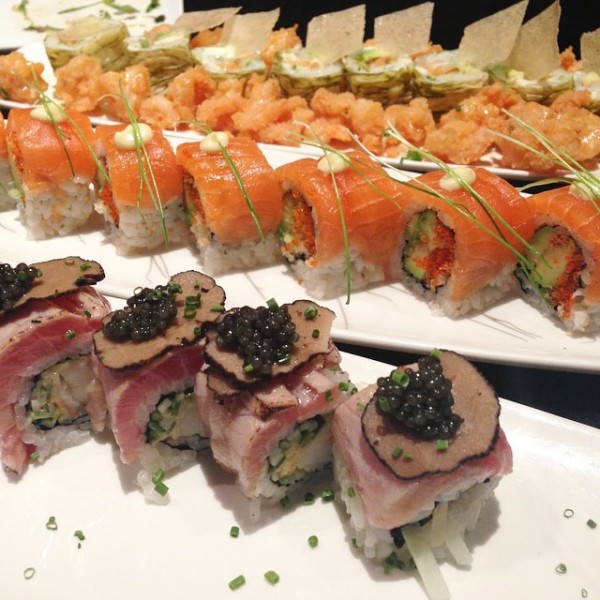 Here’s another installment of my Good Eats series, where I share some of the great foods I’ve enjoyed but were previously undocumented. I’ve been going out a lot more often lately so this one is all about Boston restaurants – some are new, some are old favorites, all are delicious.

Let’s start with some terrific sushi. I love sushi (some would call it an obsession), and I thought that after going to Japan last year that I would be a sushi snob and only eat only the super high quality, extremely well-prepared stuff. In reality I don’t discriminate and I still eat grocery store sushi every now and then (and order sushi pretty regularly). But I also have been eating some amazing pieces of sushi, sashimi, and maki rolls lately.

The rolls above are from my new favorite sushi restaurant, Oishii Boston. This is just a block away from my office in the South End, so my co-workers and I have been frequent lunch customers. Oishii is an expensive restaurant (but not as expensive as O Ya) but absolutely worth it. Pictured above are a few of their specialty rolls: toro truffle maki (seared toro, or fatty tuna, white truffle, and caviar), crispy salmon maki, and the rock shrimp explosion maki. These are my 3 favorite rolls at Oishii, but I also like their appetizers (flaming salmon and tuna tartare) and the sea bass entree. 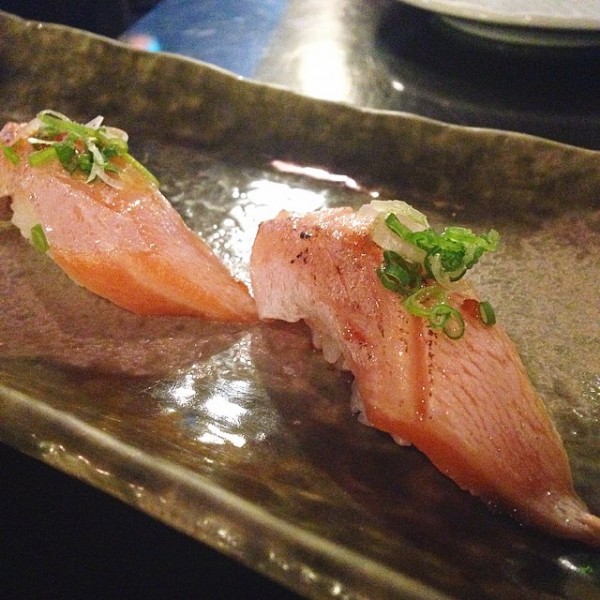 This is the salmon aburri (seared salmon belly) from Cafe Sushi in Cambridge. These nigiri pieces were part of their signature creations (you order per piece) and they are exquisite. The texture of the salmon was like butter and my friend Tyler and I both oohed and ahhed after our first taste. I live just a few blocks away in Harvard Square but it was my first time going there – it certainly won’t be my last! In addition to the nigiri, we also ordered a couple of rolls to share, as well as the salmon kama (broiled fish collar). Next time I want to try the omakase, or chef’s tasting menu. 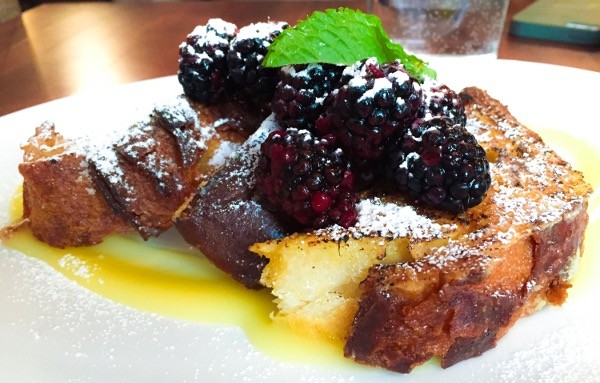 This is the pain perdue (french toast) from Alden & Harlow. I think Alden & Harlow has one of the best burgers in the city and I love going there for dinner and ordering different things to share, or just sitting at the bar with drinks and apps. But I also really like their brunch. The brunch servings are generous and there are classic brunch dishes (frittata, thick cut bacon, etc) and also some innovative dishes like hickory smoked pig tails in grits. The pain perdue is a classic dish and it’s pretty perfect. I liked the thick pieces of bread, the caramelized fruit, the lemon curd. 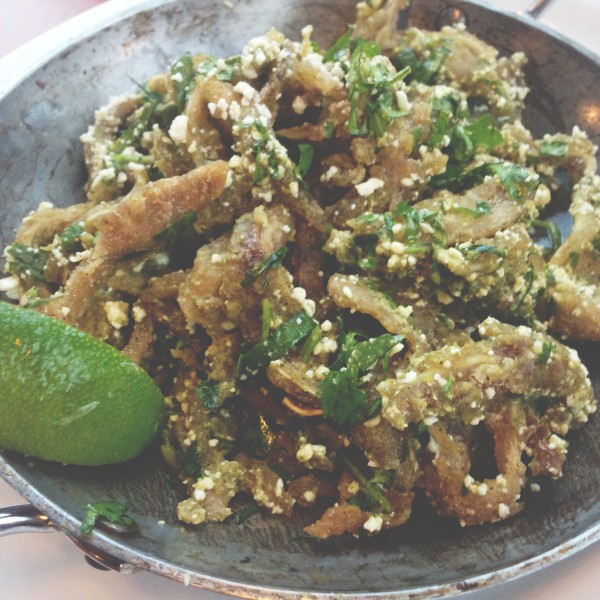 These are crispy pigs’ ear chilaquiles from the HOT and newly opened Naco Taco in Central Square. Michael Scelfo, chef/owner of Alden & Harlow, is also the man behind Naco. I went there just a couple of days after it opened and there were already long lines of people hungry for tacos and more. We tried a bunch of different tacos, the chips and dips, and a couple of the house sangrias. All were good but for me, the scene stealer was the pigs ear chilaquiles. Crispy, chewy, and topped with guajillo chilies, cotija cheese, and cilantro, this really reminds me of pulutan fare from the Philippines, a type of cuisine that’s served exclusively with alcohol/beer – essentially bar snacks but almost always fried and fatty. This plate of chilaquiles from Naco was just perfect for noshing on while drinking sangria or micheladas. 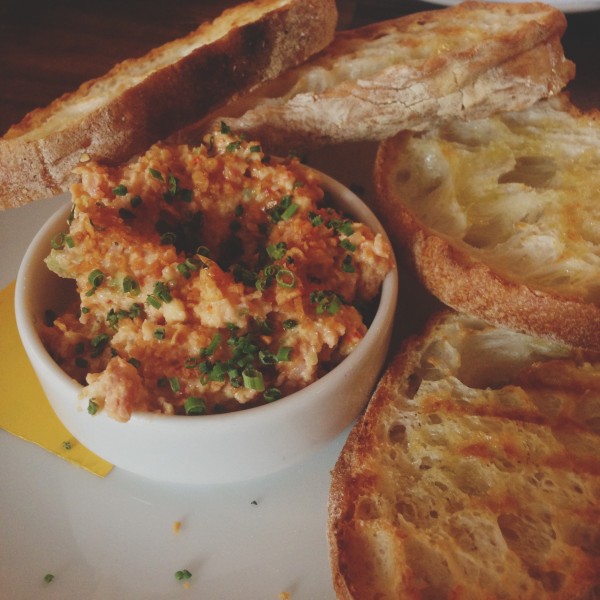 This is the mortadella pimento formaggio from Coppa. Every single dish that I’ve eaten at Coppa has been spot on, from the charcuterie, pizzas, pastas, and various small plates; this cheese spread is no exception. I love pimento cheese and I also love any sort of cured meat, and I can’t believe I’ve never mixed them together (the closest I did was make a pimento BLT sandwich). Coppa’s version has chopped up mortadella mixed right in with the creamy and tangy cheese spread, served with grilled toast. It’s a pretty simple dish and if you want to make it at home, my friend Dan re-created this on The Food in My Beard.

And speaking of cured meats, this is the meat and cheese plate from Aragosta Bar + Bistro (chef’s choice of 3 meats and 2 cheeses). My friend Laura and I ordered this as our appetizer and after we polished it off, we both agreed that it could easily have been a light meal! Aragosta is located at the beautiful Battery Wharf, and it’s so lovely going there for dinner or brunch, sitting at the terrace, and enjoying the views of the Boston Harbor. 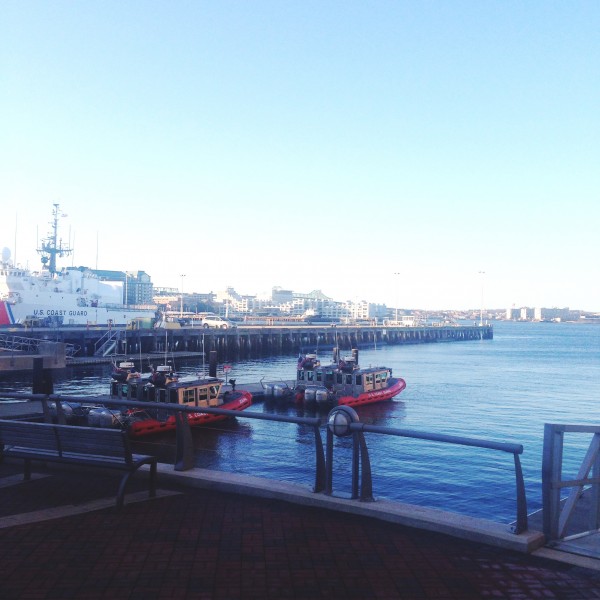 Just looking out at the water makes me feel so calm and peaceful. Of course it doesn’t hurt that the food at Aragosta is modern New England cuisine with a Mediterranean twist. It also doesn’t hurt that they have an outdoor urban campfire and you can make your own s’mores. S’mores by the harbor in an urban campfire (think patio-style) is definitely going to happen this summer. Another thing that’s extra appealing to me? 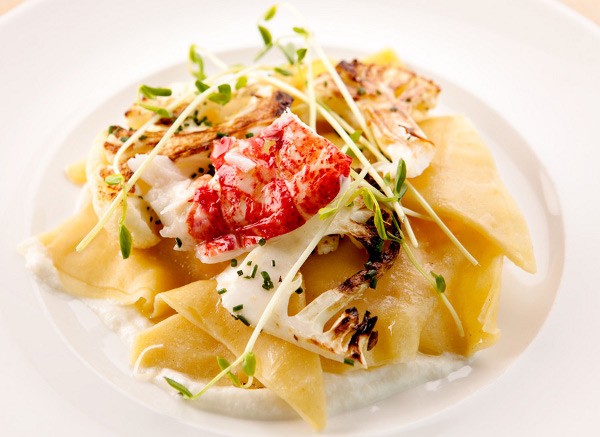 Disclosure: Aragosta provided me and a guest with a complimentary meal. The lobster ravioli photo is taken from their website. 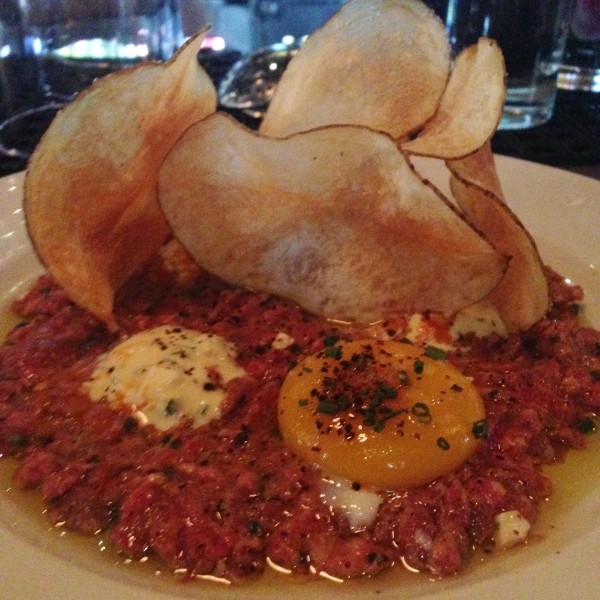 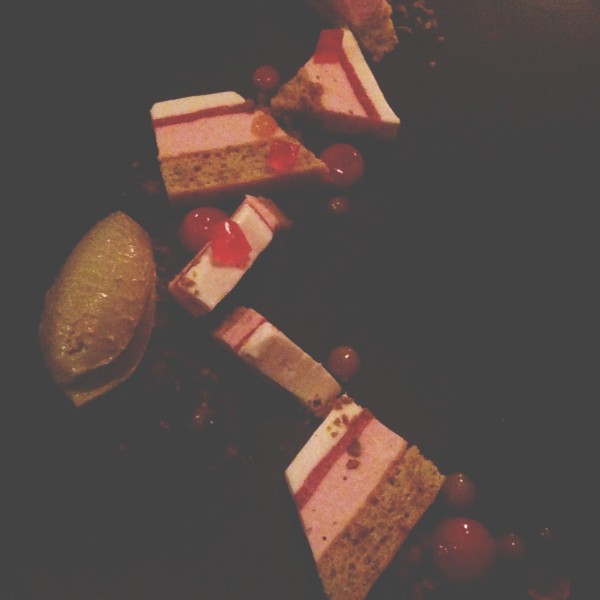 And last but not least, these are just two of the many fantastic dishes I’ve had at Townsman. I’ve been there a few times already, have tried multiple things from the menu, and to borrow some baseball analogy, every meal I’ve had has been a grandslam. Worthy of a standing ovation, especially if it begins with an outrageous appetizer like the beef tartare with an egg poached in bone marrow (!) and it ends with the most whimsical desserts like this pistachio, rhubarb, and white chocolate terrine, with pistachio ice cream. I especially like the sweets there as I’ve been a fan of the pastry chef, Meghan Thompson, for years (I dubbed her as a genius dessert magician the first time I tried her desserts). On my last visit, I also tried the biscuit and ham sliders. I don’t think I will ever be happy with “regular” sliders again.

Whew that was a lot of good eats! I’m full just reading through all of this. Just kidding, I’m hungry.

Tell me about your latest good eats! I’ll be back next week with a new recipe.

7 Responses to “Some Terrific Sushi and Other Good Eats”