Remember when I asked if food trucks are the new food trends? Well, one of Boston’s most popular food trucks has gone beyond the trend and actually opened as a restaurant! Clover Food Lab is now a restaurant in Harvard Square. Clover operates food trucks in MIT and near the South Station T stop. They serve local, organic, vegetarian fare and incorporates a seasonal menu as well.

Clover opened its first restaurant yesterday at 7 Holyoke Street (across from Sandrine’s). I checked out the place for lunch today and was pleasantly surprised that there were hardly any lines (unlike the food truck lunch lines); service was brisk and the whole place felt clean and inviting. 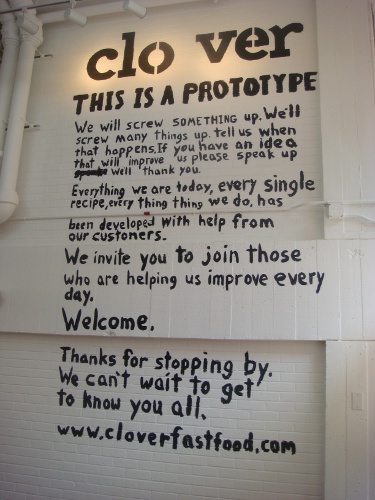 clean, minimalistic lines on both floors

The picture above looks like the place is empty but most of the people were actually standing behind me, waiting for their food or waiting in line. 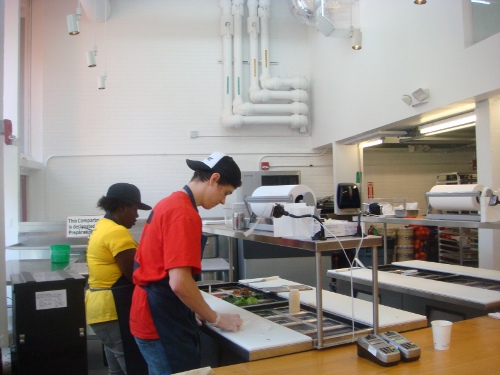 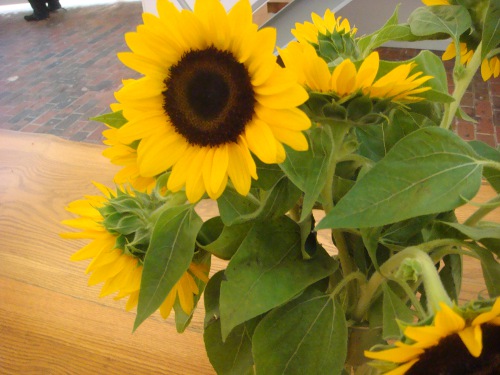 in spite of the lab-like aesthetics, there were also some nice, thoughtful touches like this

I decided to venture away from what I would normally order (which would be the egg and eggplant sandwich – hummus, eggplant, Cairo salad and hard boiled egg) and try the Soy BLT. The sandwiches come in a whole wheat pita/bread pocket. The Soy BLT, which was $5,was pretty good and also filling. 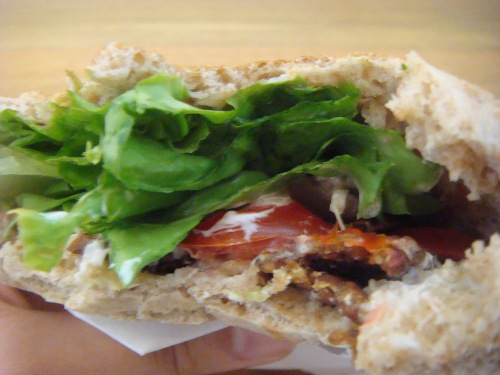 do you think soy bacon tastes like real bacon?

I liked the sandwich – the pita was doughy and warm, the lettuce was fresh and crispy, and even though it’s not tomato-season anymore, the tomato slices were still thick and juicy. But I’m not going to lie: soy bacon, made of tempeh strips, does NOT taste like bacon, so don’t get your hopes up too much expecting a healthy magical bacon replacement.  It does have very similar consistency and a slight saltiness, so it’ll do. It was actually a perfect, quick lunch.

If you haven’t been to Clover yet, I highly recommend it! Visiting the restaurant is so much more relaxing than the harried food trucks. Their food is really tasty.  I also like their chickpea fritters sandwich and the rosemary fries. I haven’t tried any of their drinks but today they were offering warm cranberry juice (among other hot and iced drinks) – I’ll make sure to try that next time. Clover also serves breakfast, and I heard they have really good popovers.

The food is cheap, which gives Clover a big advantage over other Harvard Square establishments. And better yet, it’s healthy.  I’m so glad there’s a new vegetarian place like this in Harvard Square – it’s the kind of place that’s easy to love. Welcome to the neighborhood, Clover!

Have you been to the Clover food trucks? Do you have any favorite food trucks that you wish would become restaurants too?