When one of my friends requested a vegetarian meal, I initially didn’t know what to make. I wanted something substantial, but I didn’t want to slave over a hot stove or prepare a recipe with too many ingredients or instructions. I knew I had asparagus, potatoes, and tomatoes fresh from the farmers market. I also knew I had some eggs (I always have eggs). So it became a no-brainer: I’m making frittata.

I like having eggs for dinner anyway, and I figured I can heat the leftovers for breakfast the next day.  I also figured if my friend didn’t like the frittata, then I will make up for it by serving a ridiculously sweet dessert afterwards (I believe that a good dessert always puts everyone in a good mood).

I decided to make a skillet frittata, but just on the stove top since I really despise turning on the oven during the summer. It was actually my first time attempting this and let’s just say that after I flipped the frittata, that it did not stay very pretty. 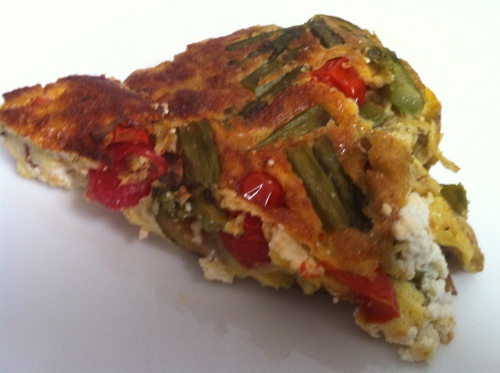 but since I cut it up in triangles, it didn’t matter that the whole thing um, kinda fell apart when I flipped it 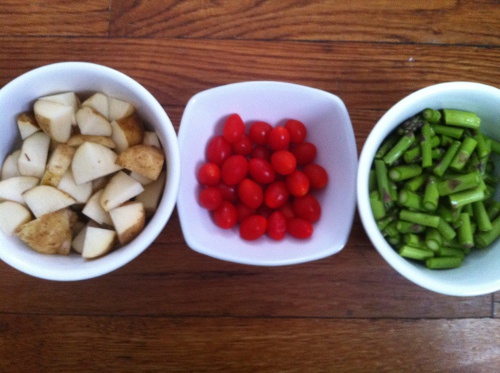 these were the stars of the show: potato, tomato, and asparagus

I like having all the ingredients prepared before I start to cook, so having a mise en place made everything go smoothly. 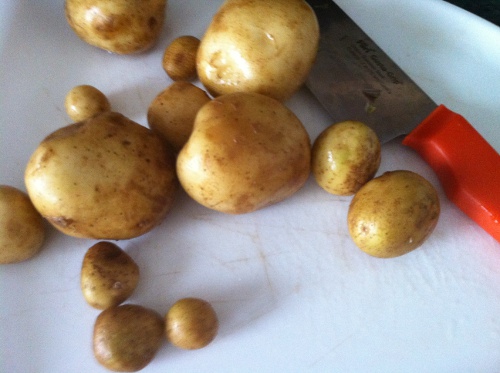 Too bad they weren’t all teeny tiny potatoes… those are adorable!

I also wanted to add some cheese to my frittata: 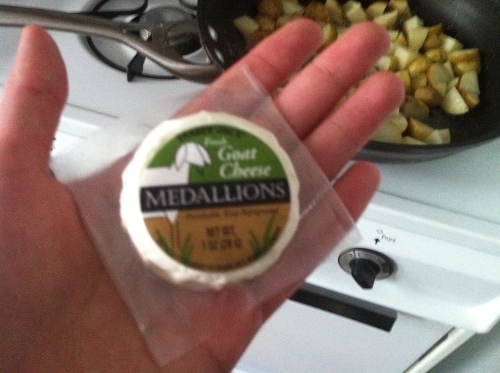 I decided on goat cheese 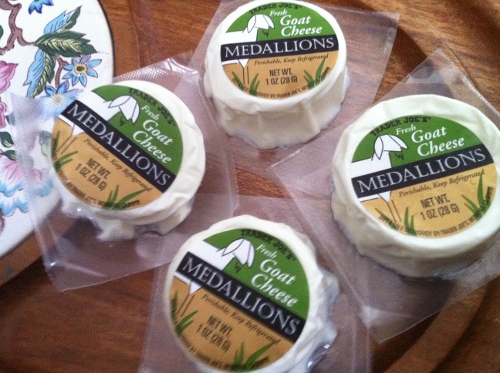 Rinse the potatoes, tomatoes, and asparagus first. Steam the potatoes until tender, for about five minutes, then set aside.  You can also just microwave them for four minutes, as I learned from Mark Bittman.

Heat 2 tablespoons of oil and the butter in a 10-inch oven-proof skillet over high heat.  Add the potatoes, season with salt and pepper. While the potatoes are cooking, you can prepare the eggs.

In a large bowl, beat the eggs with milk, salt, pepper, and a dash of cayenne pepper if you want a little spice.

When the potatoes are brown and crisp, remove with a slotted spoon and turn the heat to medium-low.  Add the asparagus and saute until crisp-tender, about two minutes. Add the tomatoes and saute two minutes longer, then flatten the tomatoes a little by smooshing them down with a rubber flipper or wooden spoon.

Stir back the potatoes, and pour the egg mixture in. Crumble the goat cheese on top, pressing on the pieces lightly so that it is nestled into the egg mixture. Reduce the heat to low and cook until the edges begin to set, but the the top is still runny, about seven minutes. Set a large flat plate over the skillet and invert the frittata onto the plate. Add the remaining oil to the skillet and slide the frittata back in. Cook until the bottom is golden, about three minutes. Slide the frittata onto a large plate and cut into wedges. 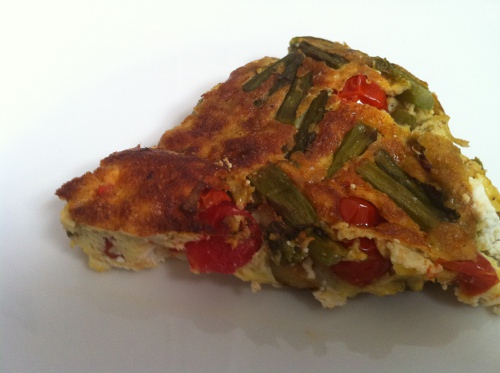 and there you have it: farmers market frittata 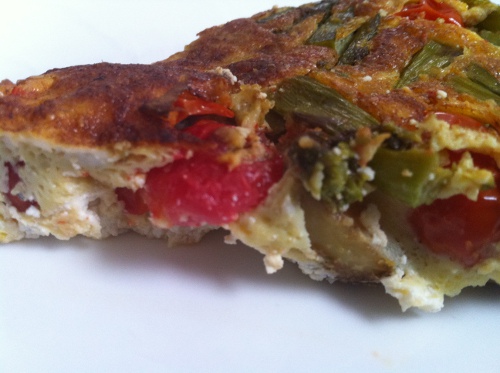 Even though my frittata flipping skills weren’t perfect, the frittata turned out great. I will definitely be making more frittatas in the future!

Do you have a favorite frittata recipe?

« Previous
Seafood at Petit Robert Bistro
Next »
Tequila at Mija