Orechiette with Roasted Tomatoes and Shrimp 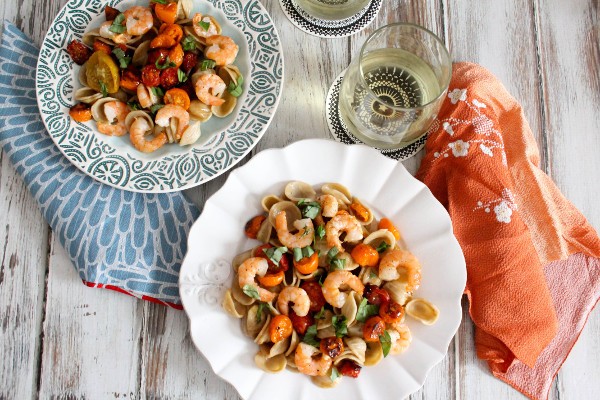 I admit I bought orecchiette pasta because I like saying it.

It means “little ears” in Italian and I think it’s the most adorable pasta shape. You guys know how much I love spaghetti but these teeny little domes are tugging at my heart strings. I often see orecchiette being served with broccoli rabe and sausage in restaurants, but I wanted something a little lighter and more summery.

And to me, summery means fresh produce and seafood, paired with a glass (or two) of crisp and refreshing white wine. 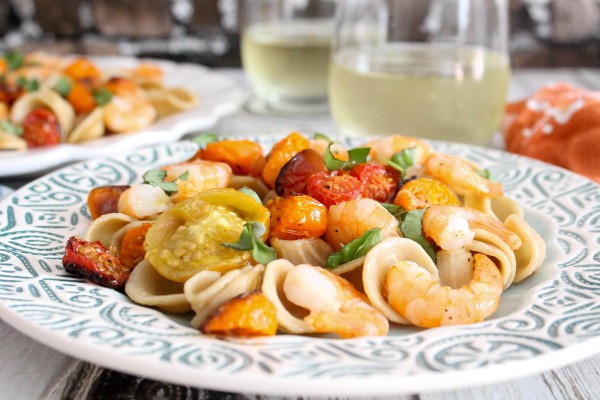 For the orecchiette, I roasted fresh tomatoes until they were almost caramelized and bursting with sweetness. I included a whole clove of garlic in the oven, too, as an additional luxurious flavor. Then tossed everything with flash roasted shrimp, lots of olive oil, fresh basil, and generously seasoned the pasta plate with salt and fresh ground pepper.

I popped open a bottle of Traminette from Taylor Brooke Winery, which I picked up during my fun weekend in Connecticut. It was very subtly sweet, more floral and almost spicy, and it paired perfectly with the seafood and tomatoes. 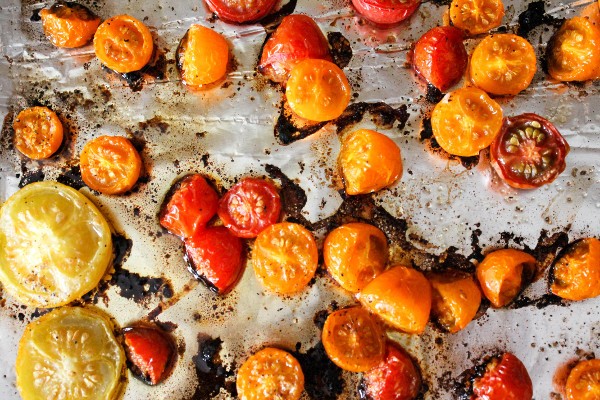 I’ve been trying to avoid turning on my oven this entire summer (only making no-bake desserts and treats) which means come dinner time, my meals were often sandwiches or cereal or sushi delivery (no shame) but I decided to take the plunge one hot weekend to roast tomatoes. And garlic. And shrimp. And it was all worth it.

I bought a pint of cherry and grape tomatoes from the farmer’s market, coated them in olive oil, and let it rain salt and pepper. I also hacked the top off an entire head of garlic and tossed that in, too. After just 30 minutes, the beautiful tomatoes tasted like hot and juicy candy. I was able to coax out the soft garlic cloves out of their skins, and I couldn’t resist stealing one and spreading on a cracker, savoring the mellow and savory flavor. Mmmm.

I used frozen shrimp (I often buy the ones from Trader Joe’s, already cooked, frozen, and without tails, and use it for pasta dishes) which necessitate only a quick rinse under warm water, a light coating with olive oil, salt, pepper, and some chili pepper flakes, and a few minutes inside the hot oven too. Flash roasting, for the (summer) win. 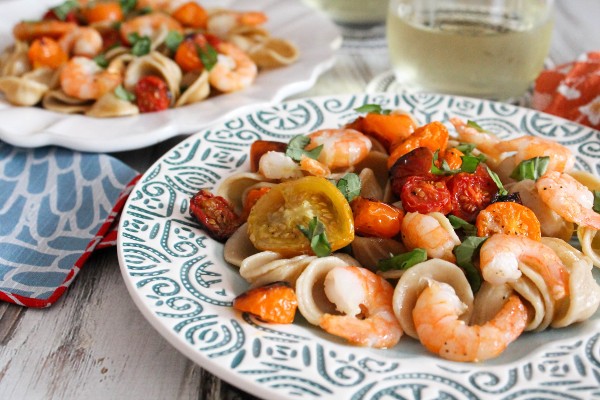 I’m a big fan of pairing shrimp and tomatoes together, but tossing in soft roasted garlic and fresh basil added so much more flavor. In hindsight, I would also have included a squeeze of fresh lemon juice (mimicking the flavors of this Lemony Shrimp Linguini) but as is, this pasta dish was summer perfection. It was so good, I wanted to wriggle my little ears in delight.

Orechiette with Roasted Tomatoes and Shrimp 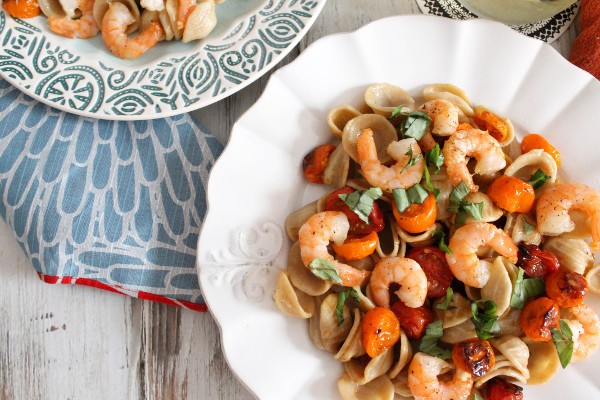 Tell me about your favorite summer pasta dish!

« Previous
Fun Weekend in Connecticut
Next »
My Favorite Weekday Breakfasts

15 Responses to “Orechiette with Roasted Tomatoes and Shrimp”