Kesong Puti: a Cheese I’ve Loved My Whole Life, Thanks To My Mom 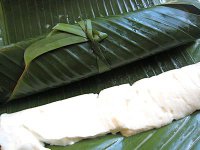 I unwrap the cheese quickly, but carefully. I once did so haphazardly, greedily, that the wrapper of bright green banana leaves cut the skin on my fingertips. But now I do so gingerly, unraveling the six-inch logs of white cheese, pre-cut into little disks that are about half-inch thick, fresh from the local wet market, with the milk still dripping from the woven leaves. It is kesong puti, one of my very favorite foods in the world.

Kesong puti is a local Filipino white cheese made from pure carabao’s milk. It is essentially fresh buffalo mozzarella, but tarter and softer than any other cheese I can think of, with a mildly pungent smell and a creamy aftertaste.  On this day that I’m reminiscing about, I was having it for breakfast with warm pan de sal, the traditional Filipino breakfast rolls. I debate whether to spread some butter on my bread but decided against it. I want to enjoy my kesong puti plain and unadorned. I want to savor its flavor as much as I can, because I don’t know when I can eat it again.

I have been living in the US for the last seven years, and have only been coming back home to the Philippines once or twice a year. When you ask any foreigner or immigrant living in the US what they miss most about home, the answers are likely to be family, friends, and food. And do I miss the food, especially my beloved kesong puti.

I tried to look for it elsewhere. In Boston, I tried the fresh mozzarella balls sold in fancy supermarkets. I tried the ones sold at the lively farmers markets that sprout up during the summer, with vendors in stalls hawking their homemade cheese. I tried different kinds of cheeses from Vermont, the state known for its happy cows that produce amazing, delectable cheeses. But as amazing as they did taste, nothing ever satisfied my longing for kesong puti. Next, I tried the Mexican white cheeses, packaged similarly to the “high-end” cheeses I remember buying in Rustan’s (a top grocery store in the Philippines), but those shrink-wrapped squares of cheese lacks the pungency and tenderness of the fresh-from-the-market cheese logs. I even tried the fresh mozzarella in Italy – I ate it in Milan, in Venice, in Tuscany – and still nothing. Nothing comes close to the taste of the kesong puti from home. No cheese sings to me, no cheese calls me  name, no cheese makes me want to brave a nearly 24-hour long flight with the premise of my favorite breakfast waiting for me at home.

I love kesong puti for breakfast. I eat it with pan de sal but I also eat it melted over white rice (I heat it in the microwave then slide the oozy, gooey cheese on top of the rice). I love making breakfast sandwiches with it, with longganisa (Filipino sausages) or with left-over pork adobo. I love it plain. I can eat one whole log of kesong puti plain. Okay, two whole logs. Or three. And my love for it, according to Philippine superstition, can be traced back to my mother, who had a daily obsession with this cheese the whole time she was pregnant with me. 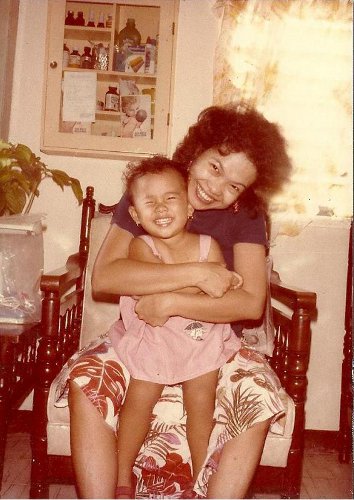 that's my beautiful mom and me

My name is Bianca, which is the Italian word for white or pure. My mother told me that in the entire duration of her pregnancy with me, she had such manic craving for kesong puti that she would fly into rage if she did not find it on the breakfast table. When I was born, she said I looked so fair and radiant, with complexion “white as milk”.  This could very well be an exaggeration of motherly pride but according to our Philippine superstition of lihi, this was because white is a characteristic of the food that my mother was hankering for – and eating – while she carried me in her womb. (see my first post about this last year)

I like imagining my pregnant mom flying into rage if kesong puti is not on the table. I like picturing myself possibly doing the same thing in the future, already planning to use hormones as an excuse just to get my daily dose of cheese. I like thinking how kesong puti will always be an unbreakable bond between me and my mother – the woman who introduced me to it while I was still in utero. Perhaps I love it so much because I was introduced to it with love, as well. 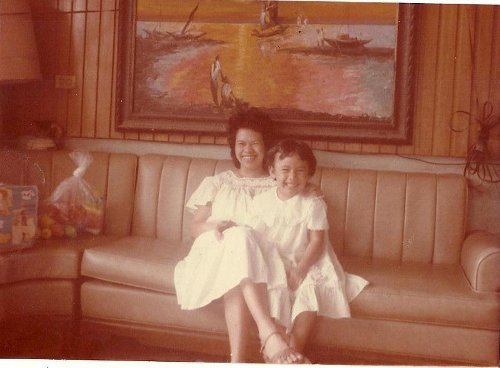 Thanks to my mom, I have a life-long fondness – an eternal craving – for kesong puti

At the breakfast table, I pick up another piece of the cheese and chew it slowly, while waiting for my family to join me. In my excitement – and jetlag – I was at the breakfast table early, and have nearly finished an entire log of kesong puti. My dad sits at the head of the table, and sips his coffee slowly. My two sisters start piling food on their plates. And I see my mom standing near the kitchen sink, quickly but carefully unwrapping the kesong puti wrapped in bright green banana leaves.

Kesong puti itself is not luminous or colorful or magnificent to look at; it is plain, white, and so simple-looking that it’s easy to pass it off as bland. But to me, it is beautiful. It is soft and comforting and delicious. It is my mom’s breakfast, and it is also mine. 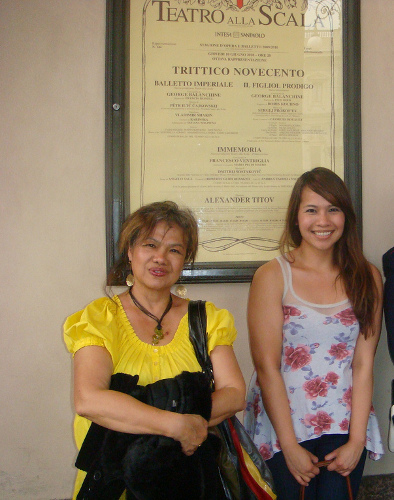 Happy Mother's Day Mom! I love you, you mean the world to me.

26 Responses to “Kesong Puti: a Cheese I’ve Loved My Whole Life, Thanks To My Mom”