That Day I Was in Paris

posted on September 8, 2012 by Bianca Garcia

I’ve been to the Paris Charles De Gaulle (CDG) airport four times, but I’ve never stepped out of it to actually be in Paris. Until that one day when I did.

That one day when I was alone in Paris.

It all started on my way to Madrid. Or I should say, I first had a glimpse of my Paris experience on my way to Madrid. There was a delay with Air France, which resulted in me missing my connecting flight to Spain and having to stay a few extra hours at my stopover, the CDG airport. It was no big deal, even if I I was a little bitter that I was being robbed of a day in Madrid. But I just started my vacation so I was still cool, still laid-back. 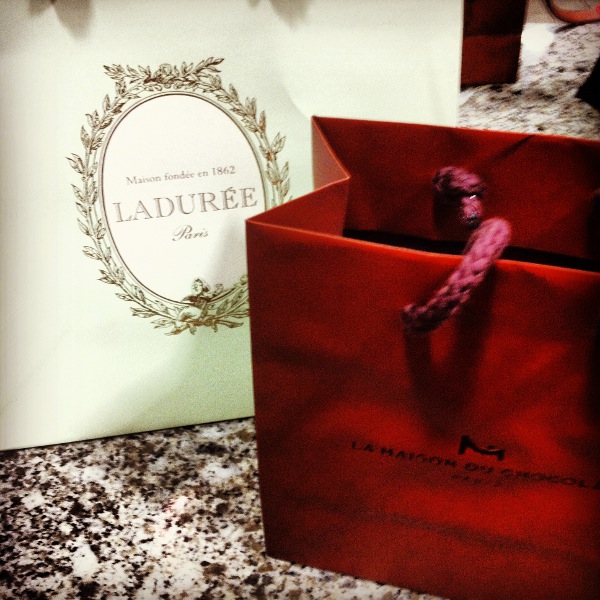 I was in high spirits, walking around the airport. I haughtily tweeted that I was stuck at the Paris airport and what else can I do but shop for French macaroons at Laduree and chocolates at La Maison du Chocolat? 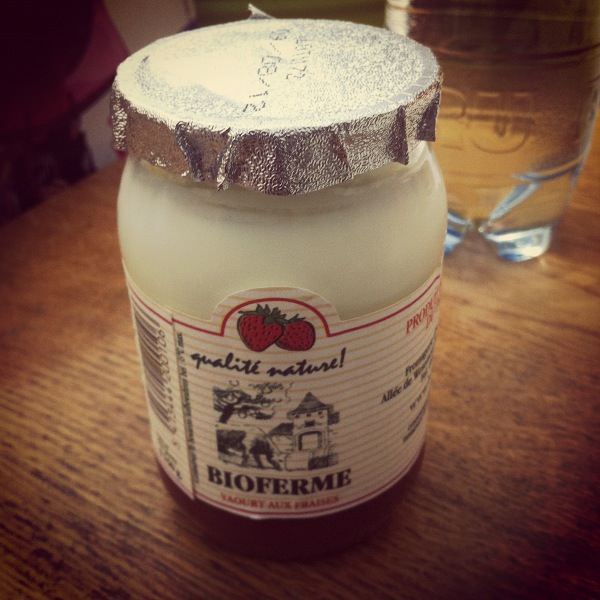 I even FaceTimed with my dad while enjoying a little snack. I was cool, calm, collected, in spite of missed flight connections.

But that was the first delay. And that was when I only had to stay for a few hours at the airport. But the second time, the second delay? That happened on my way back from Spain, en route home to Boston. I was no longer cool and collected. Nuh-uh, I was far from that. I was hung-over (let’s face it, I wanted to enjoy my last night in Madrid) and exhausted and really looking forward to an uninterrupted 7 hours of sleep on the plane. I felt helpless, frustrated, sweaty.

This second time, after I missed my connecting flight again (thanks, Air France!), I didn’t just have to stay at the airport for a few hours. I had to stay in Paris overnight. This time I had to leave the airport and actually… see Paris. At least some of it.

I got to my hotel by 9 pm. Did I say I was exhausted? I asked the concierge how can I get to the Eiffel Tower, because I don’t know when I will be in Paris again so I wanted to check it out already. But he said, in very charming, French-accented English, that I just stay in zee ‘otel because I am a “very pretty young lady” who does not speak Francois and the Eiffel Tower is about an hour away, one way, and that I would have an early wake-up time tomorrow morning, and that I should just rest.

Maybe the odds were against me. I packed a change of clothes, but they were not Eiffel-tower appropriate, in my opinion. See, many years ago I was stranded in Korea overnight and I failed to pack any change of clothes in my carry-on luggage. Since then, I always pack a full set of underwear, sleepwear, and some change of clothes with me whenever I travel internationally. 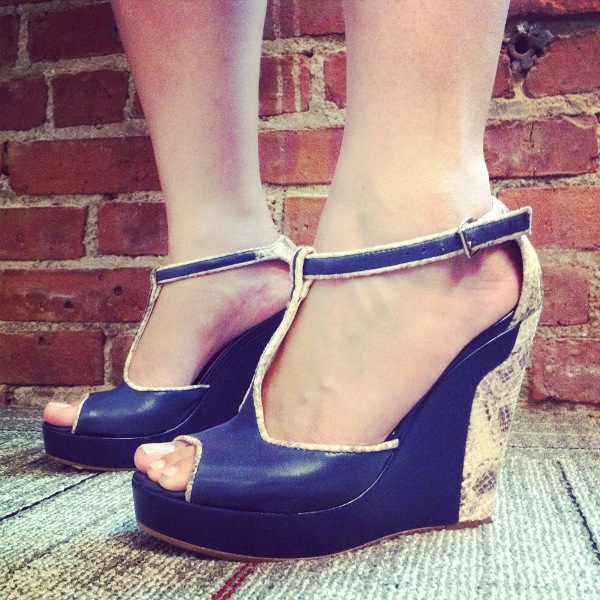 But this time, in my carry-on luggage, I only had 1) a underwear and sleepwear, 2) workout gear (don’t ask), and 3) a new pair of sky high heels (I stuffed them in there because didn’t fit in my checked-in bag anymore). Sure, the heels were something I would’ve loved to wear outside in Paris. But not with my now-sweat-soaked traveling clothes from Spain. I’m not going out there in my nightgown. And definitely not in my Lululemon stuff.

Maybe some of you won’t get discouraged to see the Eiffel tower by the concierge and lack of appropriate clothes, but I gave up. I decided I can enjoy my night in some other way.

So I went up to my room, freshened up, then proceeded to walk to a restaurant to have dinner by myself. In Paris. The most romantic city in the whole world.

I started with a salad. Lightly dressed greens with a silky vinaigrette, two slender slices of roast beef, and shreds of sharp, nutty cheese. I had a glass of Côtes du Rhône. I picked a mini baguette from the bread basket and three small pieces of cheese: a round of soft, creamy brie, a triangle of sharp, pungent blue, and a square of grainy, caramely gruyere. I took some butter, slathered my baguette with it, and ate it with my cheese. I didn’t care about the fat content or calories! I was in Paris!

For my main entree, I went with pasta Alfredo. I know that’s not very French. Why didn’t I pick escargot or boeuf bourguignon? Because in the middle of this grandeur and adventure, I just wanted comfort. So pasta it was. And it was a plate of comfort. Thick, creamy, Alfredo sauce coating perfectly al dente fettuccine – that wasn’t whole wheat. Pure indulgence. It felt like a warm, fuzzy, hug in the middle of cold Paris.

Dessert? I continued to indulge. Two mini cannelles. Two shortbread cookies. Two pieces of chocolate. Two of each, for one of me.

I didn’t have the urge to whip out my giant DSLR. I didn’t want to Instagram every moment. I didn’t want to tweet anything. I just wanted to be. It was the most peaceful meal of my vacation. I had a big smile when I left the restaurant.

The next day, I woke up bright and early. Bounced up from my hotel bed, flung open the curtains, and looked out at the… highway and construction work. This was certainly not the Paris I imagined. But I had a spring in my step and I arrived at the airport a couple of hours early (didn’t want to risk anything). 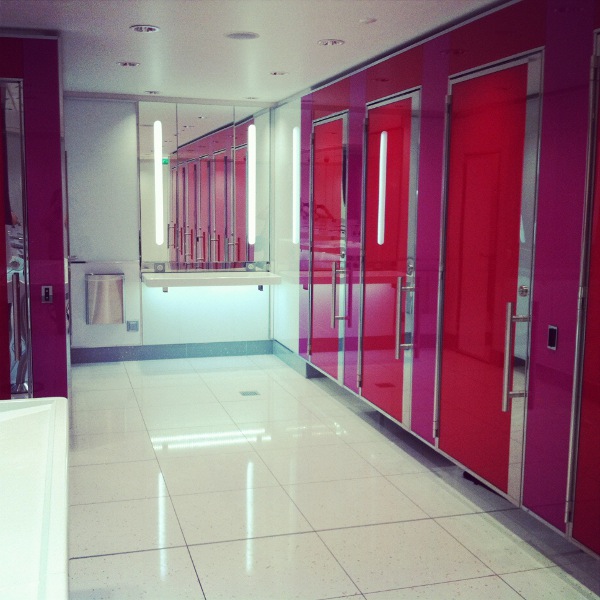 I felt like myself again. I walked around Terminal 2. Took pictures of the bathroom (very Prada-ish). 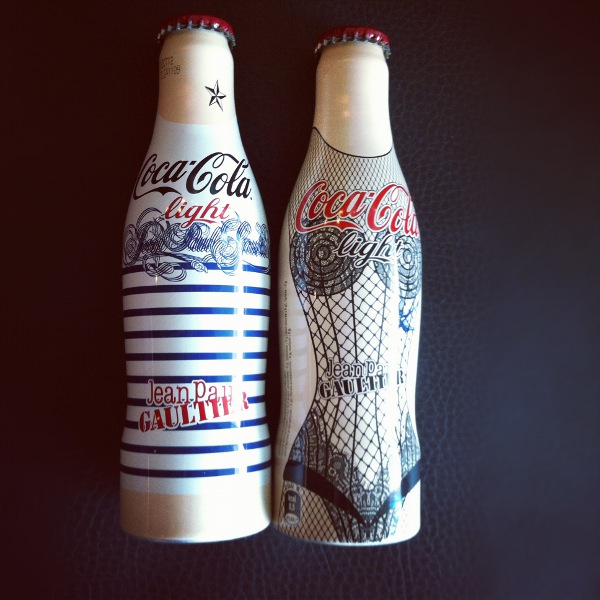 Took pictures of the soda bottles dressed in Jean-Paul Gaultier.

I was alone in Paris, but I wasn’t lonely. In fact, I realized I was really happy.

So just you wait, Eiffel Tower. I’ll be back someday. And by then, I’ll be ready.

« Previous
Strawberries and Cream Granita and Other Good Eats
Next »
Vanity: My Favorite Sin

19 Responses to “That Day I Was in Paris”