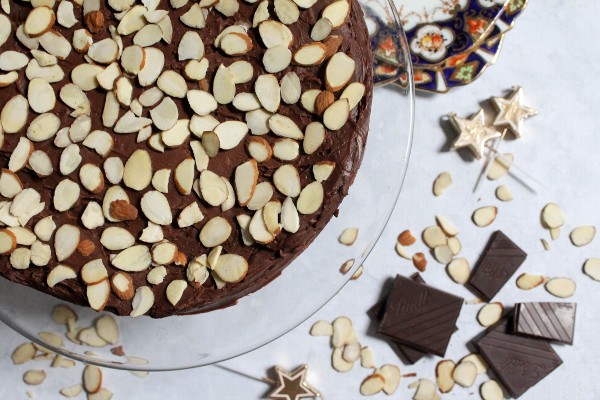 I sprained my ankle last week. Just a minor sprain, no broken bones or anything, but it was swollen and bruised and hurt a lot.

As a result, my boyfriend and I cancelled our week-long trip to San Francisco (because, you know, hills). We were planning to celebrate our birthdays there, which are two days apart. Instead we celebrated here in Boston with our favorite foods. And this cake.

I’ve had this cake on my to-do list for years. I think since the first time I saw Julie and Julia, one of my most loved movies. Remember that scene when Julie’s husband was digging into that slice of chocolate cake? 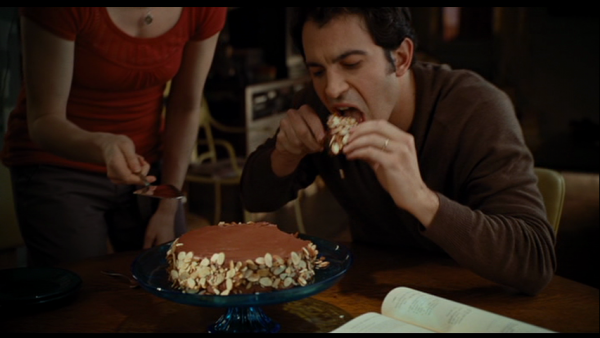 (Except now every time I see Chris Messina I think of Danny Castellano from The Mindy Project.)

So yes, I’ve had it on my list for seven years (seven years!) but never made it, until now. Because what better way to celebrate my birthday, and the birthday of my boyfriend who loves any and all things with almonds, than with Julia Child’s Chocolate Almond Cake?

This chocolate cake with chocolate rum frosting is unlike anything I’ve ever made before (and I’ve made a lot of chocolate cakes, and boozed up a lot of things with rum). It’s just one layer, nothing fancy, but it does involve multiple steps and some special ingredients like almond extract, almond meal, and cake flour. And rum. I love that there’s rum in the batter and in the frosting. 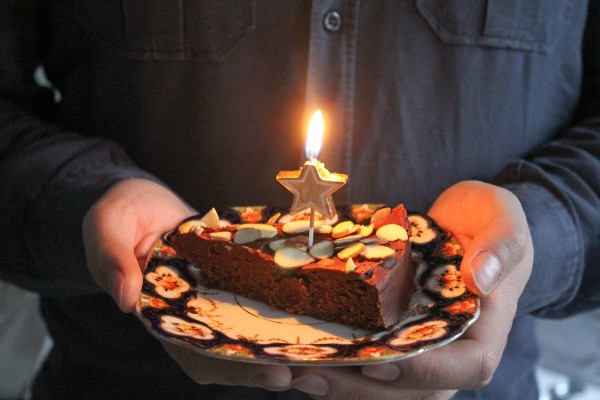 I’ve been making my own birthday cake for a few years now (except for that one year when I made cabbage. Yup, cabbage.) When Matt and I started dating last year and I found out our birthdays are two days apart, I knew I wanted to bake a birthday cake that we both would love. He likes chocolate covered almonds, I like cake and lots of butter, and so Julia’s cake it is.

This cake is called Reine de Saba, named for the Queen of Sheba. And the cake does seem like it is fit for royalty. Rich, dense, and intensely chocolate-y, with the warm flavors of rum, and the delicate taste of almonds. I love the thick frosting, and the crunch from the sliced almonds on top. 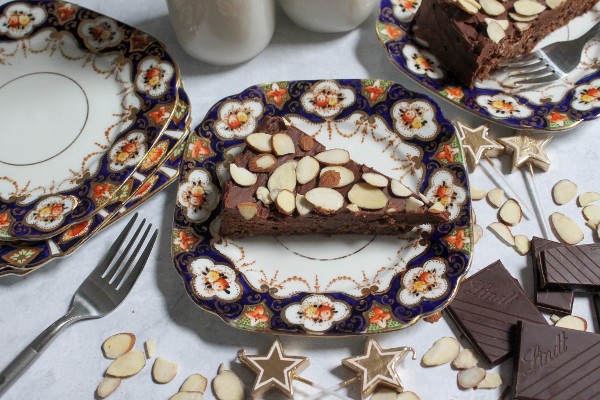 I read quite a few takes on this cake, and some people commented that the original amount of frosting was a little scant and recommend doubling it, so I did. In my opinion, one can never have too much frosting. Especially if that frosting is made with good quality dark chocolate (I used Lindt), butter, and rum.

If you don’t like rum, you can substitute it with coffee, which I’m sure will taste amazing as well, because coffee brings out the flavor of chocolate (I like adding instant coffee powder to brownies). I’m a big fan of rum in baked goods, and it pairs so perfectly with the bittersweet chocolate and the crunchy almonds. I don’t recommend other changes to this recipe – Julia Child was a legend for a reason, so trust her on this one.

But trust me on doubling the frosting (the recipe I’m giving you below has my frosting measurements). Especially if you’re baking this cake for a special someone’s birthday, because if you’re going to have an overabundance of frosting, birthday cake is the best vehicle for it. 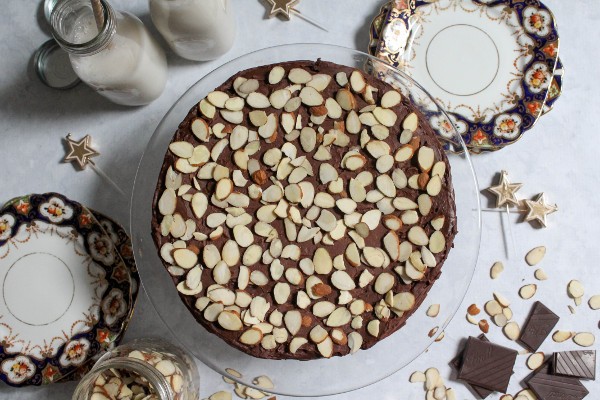 This cake is very fudgy, with a moist center, and the chocolate-butter-rum frosting tastes so luxurious. It’s one of the best cakes I’ve ever made.

I wrote down the recipe in a way that makes the most sense to me, and I also doubled the frosting (the recipe below is exactly how I made the cake).

Don't like rum? You can substitute brewed coffee instead.

Almond meal is just pulverized almonds. You can make your own by grinding raw almonds in a food processor, or buying almond meal in bags or in bulk bins.

Originally from Julia Child's Mastering the Art of French Cooking, there are lots of digital versions such as the one from Oprah 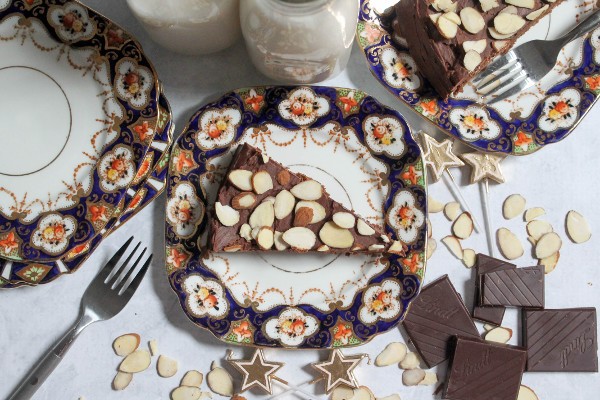 My boyfriend and I celebrated our birthdays in multiple ways this past week. It didn’t matter if we were in San Francsisco or Boston, whether I sprained my ankle or not. What matter is we have each other. And this cake.