Dinner at Craigie on Main

What can top a dinner of burger and crispy pig tails, sitting at the bar of Craigie on Main? How about another luscious dinner of farro risotto, cod cheeks, veal with sweetbread, and bacon-wrapped pork knuckles, sitting at one of the best tables of the same restaurant?

Craigie on Main is known for its “refined rustic” French-inspired, seasonal, and locally-sourced dishes. Chef Tony Maws prepares dishes that generate a cult following (I’m not kidding, people line up outside for the Craigie Burger; some are downright devoted), and peppers his menu with less traditional offerings like pig tails, frog legs, cock’s combs, lamb tongue, and many more. However you don’t have to be all into exotic and adventurous foods to enjoy Craigie on Main. The food is undeniably, mouth-wateringly, lavishly GOOD.

My latest Craigie on Main dinner was with Jacki and Meesh, Emily, and Dan. We were seated at one of the high tables right near the open kitchen, so we had a great view of the action! 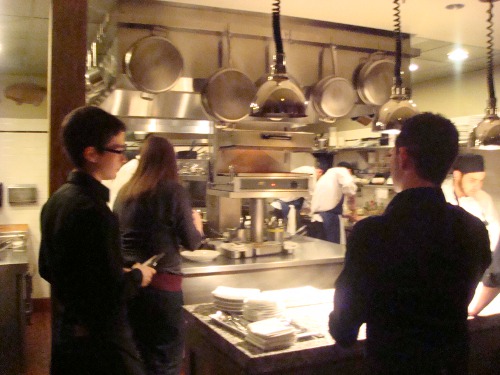 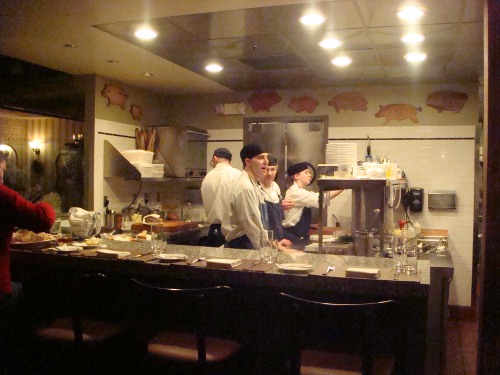 there were also some "ringside" seats (I think you have to request this when making a reservation...)

We decided to order a bunch of items and share everything family-style, and it took us a while to decide what to get. While we were debating, the nice folks at Craigie sent some complimentary amuse-bouche: 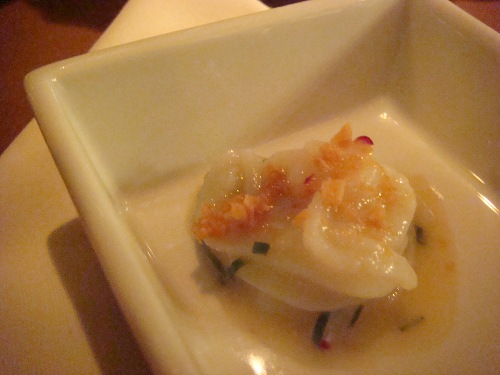 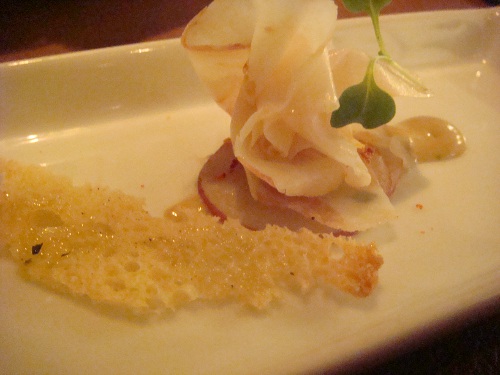 guanciale on top of potato slices

I’ve never had squid noodles before and it was pretty interesting: I thought it might be rubbery but it did have the consistency of al dente noodles. It was served chilled, and for some reason I don’t like the idea of eating cold squid, so one little bite was enough. As for the guanciale, which one of our servers actually proclaimed was “better than bacon,” it was exactly what I expected it to be: soft, melty, and slightly salty. Guanciale by the way is a type of Italian bacon that is made with pork jowls (while regular bacon is made with pork belly).

The our table feast started! We shared several appetizers: 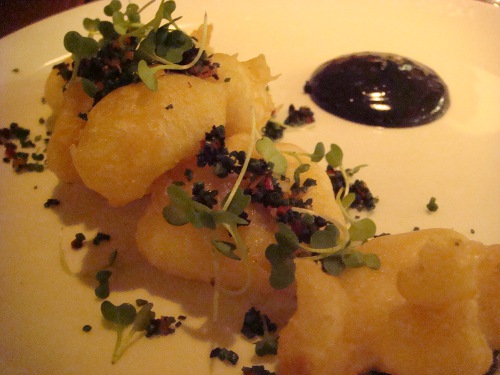 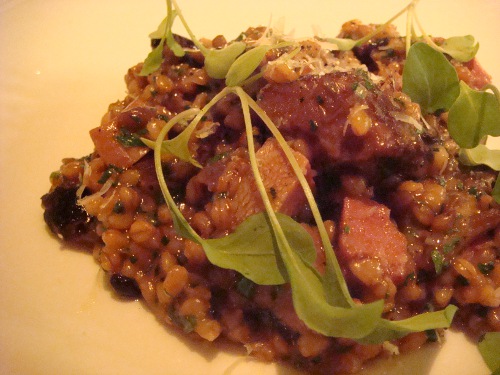 farro risotto with chorizo (my favorite dish of the night) 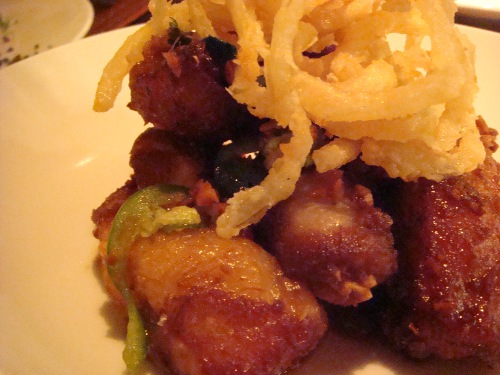 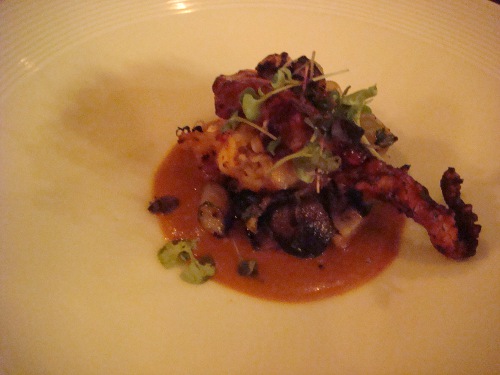 We also shared a couple of entrees and sides: 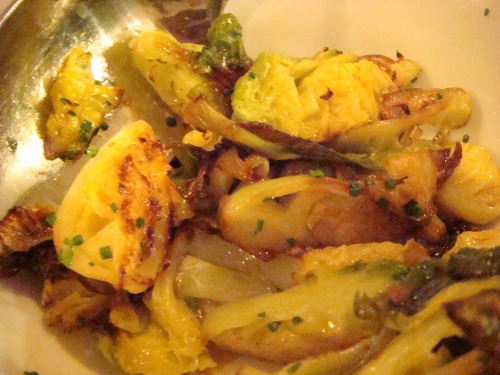 roasted brussels sprouts (guess what it was roasted in? duck fat. yup) 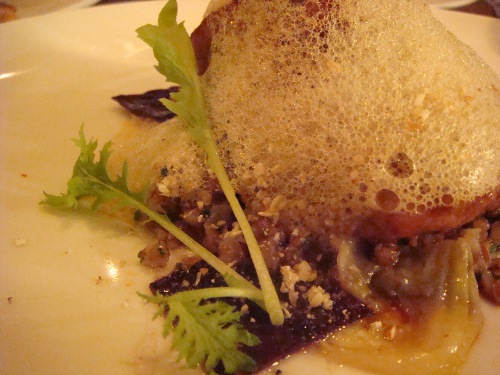 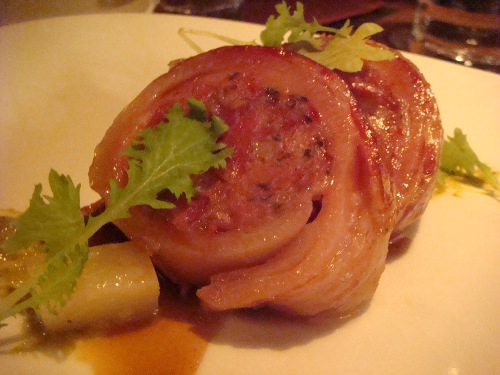 the special of the night: pork knuckles, deboned, stuffed with a ham/sausage mixture, and wrapped in bacon 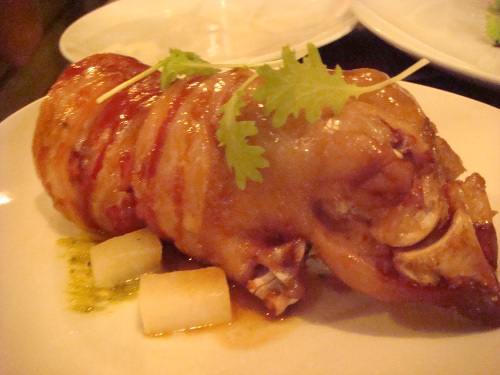 have you ever had pork knuckles before?

As tasty as it was, we joked that we could feel our cholesterol levels rising with each bite! We all like pork but this was a little too much. The texture of the skin wrapped in bacon was too fatty – if it was crispier, it would have been much better, like the crispy skin I tried from Taranta at Burrito Bowl. At this point, I made a comment that all I really want was a grapefruit, to cut the fat and all the richness we just ingested. And then like magic, this palate-cleanser arrived: 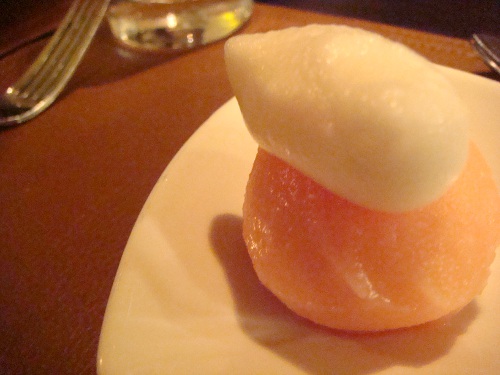 a tiny scoop of grapefruit sorbet!

Notice that I said palate-cleanser and not meal-ender, because (of course) we ended the meal with dessert :) 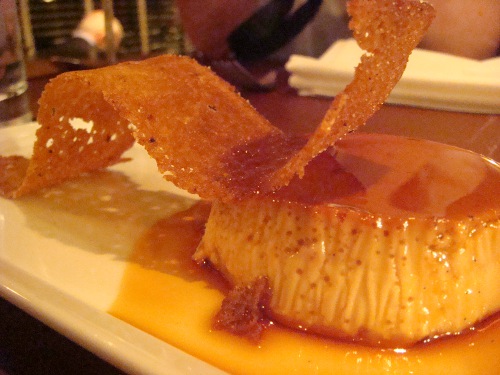 caramel flan with a ribbon of caramel brittle

We all left happy (albeit heavier and with semi-clogged arteries). Our dinner was over-the-top rich but we enjoyed each dish. To say that we ate cheeks, tentacles, tails, sweetbread (in case you didn’t know, sweetbread is made from a young calf’s thymus gland and pancreas), and trotters in one sitting is pretty impressive, even for a jaw-eating, liver-loving foodie like myself. Let me repeat that: cheeks, tentacles, tails, sweetbread, and trotters. In one sitting.

I’m eating vegetables for the rest of the month.

What was the last indulgent meal you’ve had?

17 Responses to “Dinner at Craigie on Main”