Just Add Cheese and Poe’s Kitchen Dinner (Or: The Day I Ate a Ghost Chili Without Knowing It)

Yes, that may be my longest blog post title ever. But when you go to a fabulous dinner party hosted by your friends and one of the most creative chefs in town, AND you eat one of the world’s spiciest chilis, then the blog post title certainly deserves a superlative.

Last week, I was invited by Jacki and Meesh of Just Add Cheese for a private dinner at the Rattlesnake, where they worked with Chef Brian Poe for a special tasting menu that highlights his creativity in the kitchen as well as the hosts’ love for spice. Now, we all know I love spice as well. But aside from that, I was especially looking forward to dinner at Poe’s Kitchen at the Rattlesnake because that is where I first met Jacki and Meesh (at Burrito Bowl) and also the chef himself! 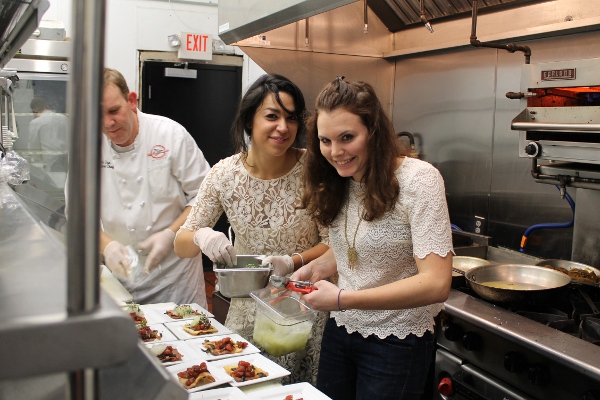 where else can you find pretty chef's assistants who wear lace in the kitchen?

The dinner was held at the second floor of Poe’s Kitchen which is a great venue for private events – there’s a separate kitchen, bar, and it’s right near the famous roof deck. While our three chefs were busy in the kitchen, I enjoyed some bar snacks and drinks with some of Jacki and Meesh’s friends plus fellow bloggers Daisy, Emily, Dan, and Justin. 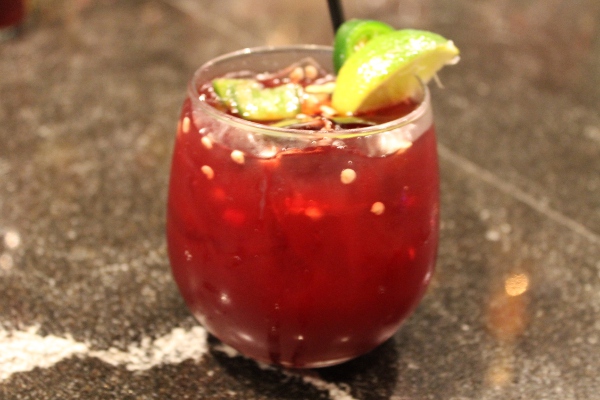 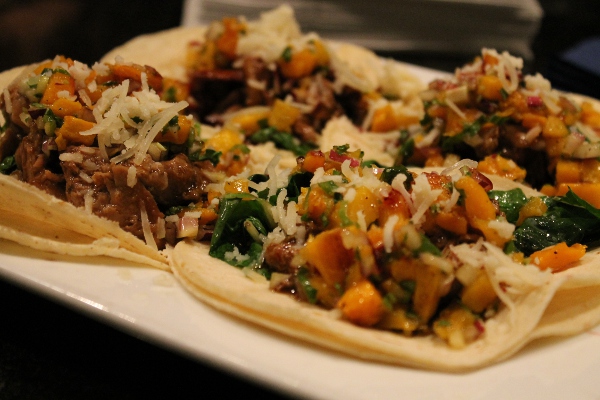 I like quail (it’s so cute!), I like pumpkin, and I like jalapenos, and eaten together I like them even better. I feel like this was a perfect representation of the food offered at Poe’s Kitchen: Mexican cuisine that mingles with flavors from the Southwest and South America. 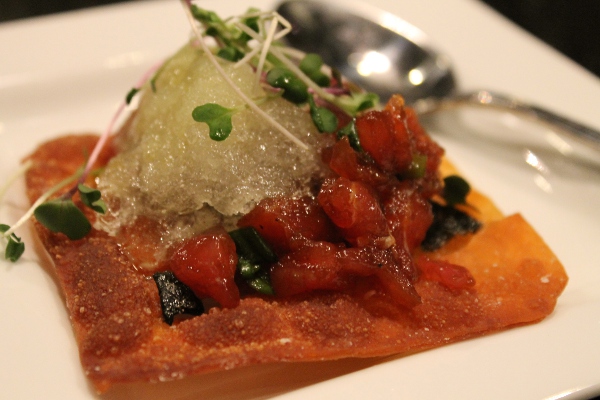 tuna tartar with pickled ginger and wasabi sorbet, on top of a seaweed wonton

This was a great play on texture with the crispy wonton, the soft tuna, and the cold sorbet. There’s a lot of different flavors and texture in each bite, and it reminds me of something that I could’ve eaten at the Taste of Perkins: cool, creamy, crunchy, sweet, savory, spicy.

Then we sat down and prepared ourselves for a lavish meal: 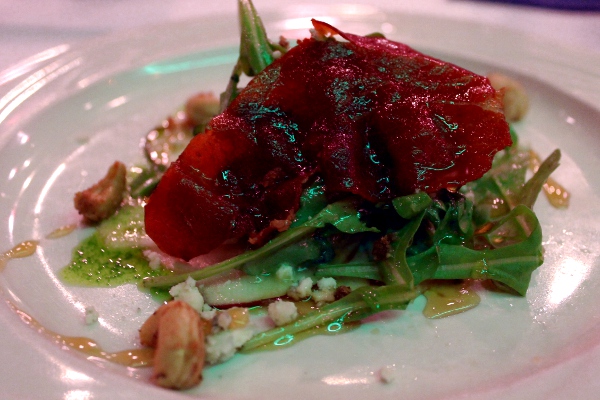 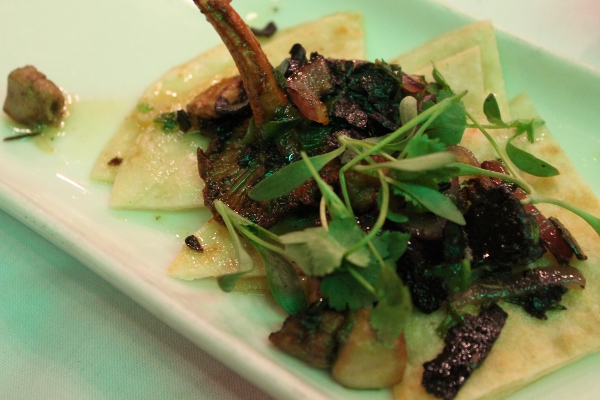 This was my favorite dish of the night. A quesadilla filled with slightly peppery chantrelles with chihuahua cheese and chervil, topped with a foie gras and truffle “salsa”. It was bar food-meets upscale-meets hungry. As in makes me hungry every time I think of it. Chef Brian Poe, can you please put this on the regular menu please?? 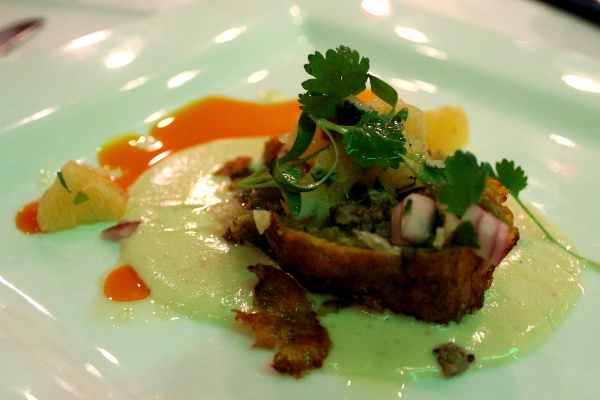 You’d think bar bites plus three courses would be enough, right? Wrong. Jacki, Meesh, and Brian have another thing in common: a love for pig (which I, along with the other guests, share as well). 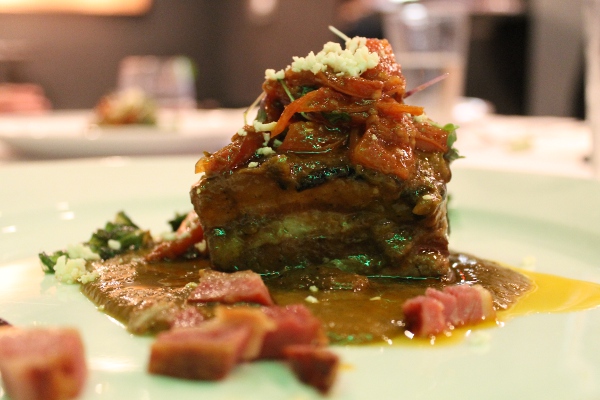 Now where was that ghost chili I so boldly claimed as eating without knowing?

For those not familiar, a ghost chili – or ghost pepper – is the hottest pepper in the world (to be more precise, it is the hottest naturally grown pepper, as some peppers can be synthetically developed). According to the Scoville scale (a way of measuring the spicy heat of a pepper), the ghost chili has a rating of 855,000 heat units (SHU) — to put this in perspective, here are some other peppers and their Scoville ratings:

So where was it? 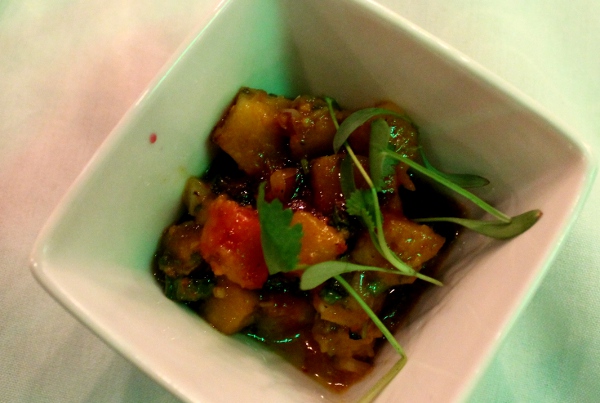 I last had a spicy roullette round at Hell Night at East Coast Grill (where I boasted that I grew up eating bird’s eye chilis… then cried while chowing down on the Wings of Mass Destruction). I knew what a ghost chili tasted like and I was prepared for the worse. I mean, I wanted to suck at the wet naps the last time I had some ghost chili oil!

So at Poe’s Kitchen, our whole table collectively took a spoonful of the mystery dish into out mouths, and we all slowly ate the peaches spiked with herbs and chilis, and we waited for someone to cry (or yell or holler, whatever)… and we waited… and waited… Until I realized, “hmmm, my dish was kinda spicy.” So I said, “guys, I think I got it.”

“You think you got it?!” The table erupted. “Ohhh you’ll know if you got it!”

Turns out, I did get the dish with the ghost chili (everyone else took teeny bites and confirmed it), it just took a couple of minutes for my taste buds to register it. I don’t know what happened – maybe my tongue was already slightly numb from all the other spicy dishes that night, maybe my childhood of crushing bird chilis into dipping sauces had finally surfaced as an ability to tolerate any kind of spicy pepper, or maybe I subconsciously willed myself into not registering how hot it actually was because I just didn’t want another incident of crying/sniffling/howling in pain during dinner. Whatever the reason was, I almost didn’t know I ate a ghost chili that night.

Well, until two minutes passed and my mouth started burning… 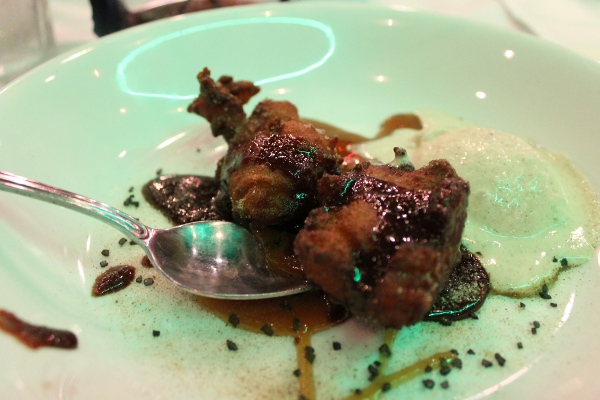 The whole night was a terrific time, and I know that I can speak for the other attendees as well when I say that the menu was spectacular. Thank you so much to Jacki, Meesh, and Chef Poe for the excellent dinner!

14 Responses to “Just Add Cheese and Poe’s Kitchen Dinner (Or: The Day I Ate a Ghost Chili Without Knowing It)”