When  I visited Eataly last month, my friends and I had some luscious tuna meatballs that I’ve been wanting to re-create at home. The tuna meatballs tasted incredibly meaty and not at all fishy. They also tasted lighter and not as cloying or heavy as regular meatballs sometimes can be, yet it was still a hearty and comforting dish.

I’ve never made tuna meatballs before so I researched some recipes online. I wanted to make tuna polpette (mini meatballs) just because I like mini versions and bite-sized food. To stay true to the spirit of Eataly, I could’ve followed Mario Batali’s recipe, but it required turning on the oven to bake the polpette and it was too hot to do that (no-bake dishes are really much better for the summer). So I turned to the queen of easy, no fuss meals: Rachael Ray.

Rachael Ray has a recipe for Puttanesca with Tuna Polpette and Penne. I followed her instructions just for the tuna meatballs, mostly because I don’t like puttanesca (not a fan of olives). 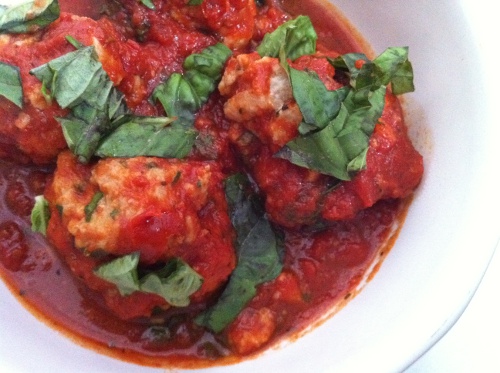 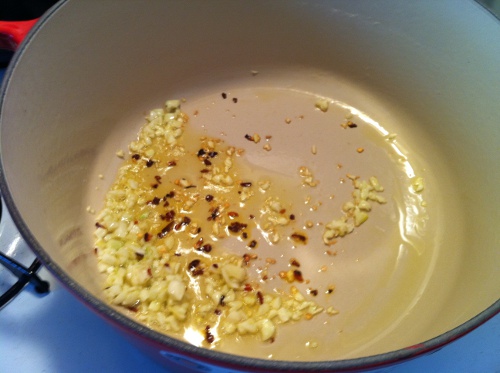 Add the garlic and chili pepper flakes, turn heat to low and saute for a couple of minutes.

Stir in the crushed tomatoes, then stir in stock. Let sauce simmer while you make the tuna meatballs.

Cut tuna into chunks and grind in food processor into coarse mixture. You can also just chop the tuna by hand (I did). Incorporate the egg, bread crumbs and parsley and season with a little salt and black pepper. Transfer the tuna mixture from the processor to a bowl and add a drizzle of olive oil. Stir to combine. 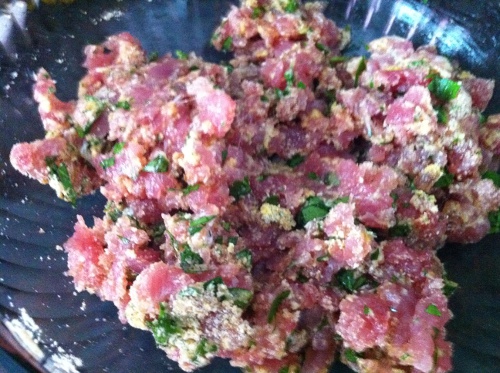 my tuna mixture had a texture similar to tuna tartare

Roll the tuna into 2-inch balls and drop into the sauce. Cover the pot and simmer the tuna balls in the sauce for about 5 to 7 minutes. 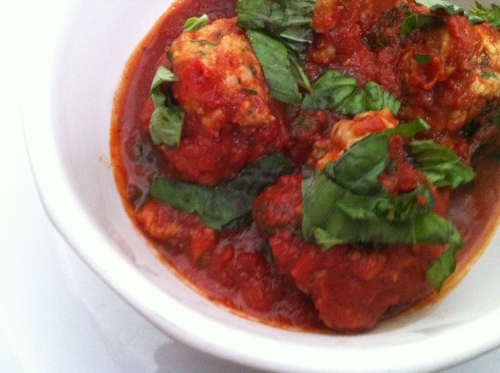 These tuna meatballs were exactly what I wanted them to be: substantial and meaty, but didn’t weigh me down. I served them on top of some wilted spinach and a crusty french bread but of course they pair perfectly with some pasta too.

And yes, I realize that I’ve been talking about meatballs a lot in the last few months: meatballs at Posto, Eataly, Coppa, Stone Hearth Pizza, and Alma Nove. I like meatballs and I’m proud of it. I also like Nutella Cake Balls and Oreo Balls. Balls of food are fun.

On an unrelated note: if you like Sex and the City check out my review of Summer and the City, which is a prequel to SATC – it’s about Carrie when she first moved to New York. It’s a fun summer read if you’re looking for some chick lit!