When I went to Singapore last year, everyone kept telling me to try “Chicken Rice” or Hainanese Chicken Rice. I didn’t understand what the big deal was: it was just poached chicken in a garlic and ginger broth, and rice cooked in that same broth. And then I tasted it.

This is the epitome of a classic, simple, Asian meal: a basic protein served with flavored rice, fresh vegetables, and an array of dipping sauces. Hainanese Chicken Rice is Singapore’s national dish, and it is also a popular part of Malaysian cuisine. Now I know why my friends keep raving about it, why some of them bring back boxes of Hainanese Chicken mix, why Penang (a Malaysian restaurant near Chinatown here in Boston) is one of the most requested first-stops among visiting friends.

I’ve had Hainanese Chicken Rice in Singapore (we ate at Boon Tong Kee), in the Philippines (at the Mandarin Oriental), in Boston (at Penang) and recently my friend Val concocted a homemade version. 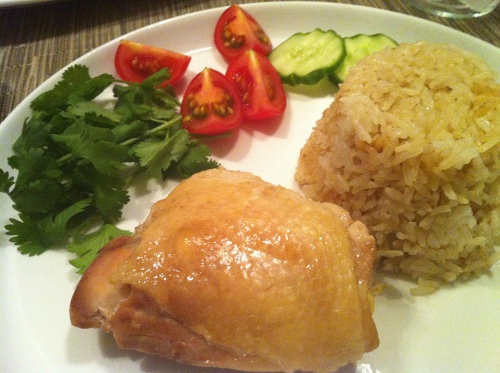 It looks deceptively bland, but I assure you it is not. 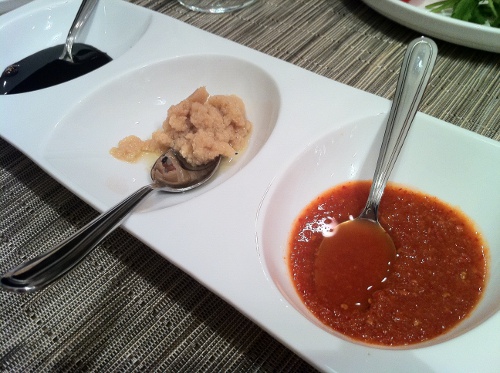 I most recently read about Hainanese Chicken from the Kitchn which references Mark Bittman’s recipe. The actual process is very simple, but just a little bit time consuming (poaching the chicken, letting it cool, cooking the rice with the chicken broth, assembling the sauces, etc). My friends recently came back from a trip to Singapore and brought Hainanese chicken mixes and also jars of the dipping sauces, so we were spared some time, but not flavor. 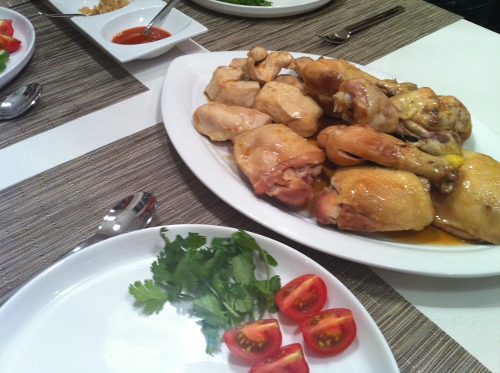 I've seen versions with shredded chicken, but in Asia the chicken is served in pieces. 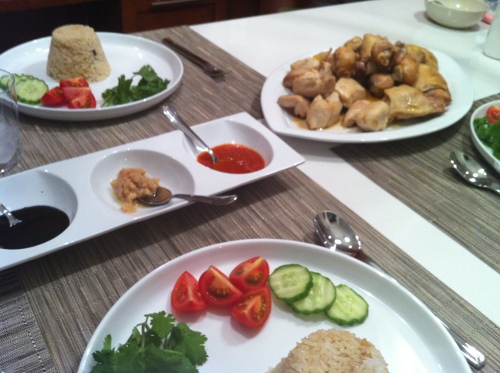 There are also various toppings or fresh veggies served alongside. We chose cilantro, tomatoes, and cucumbers.

The beauty of Hainanese Chicken Rice lies in its simplicity and adaptability. Want different sauces? Try plain soy sauce, hoisin sauce, or even oyster sauce. Different chili? Try sriracha or kochujang (Korean hot sauce).  You can also use different aromatics for poaching the chicken. While the chicken retains a lot of flavor, for me though, the star of the dish is the fragrant rice. Cooked in oil, garlic-and-ginger chicken broth, more garlic, and shallots – it is aromatic and luscious, and provides the toothsome companion to the tender chicken and crisp veggies.

Mark Bittman’s recipe for Hainanese Chicken with Rice may be found in the New York Times. 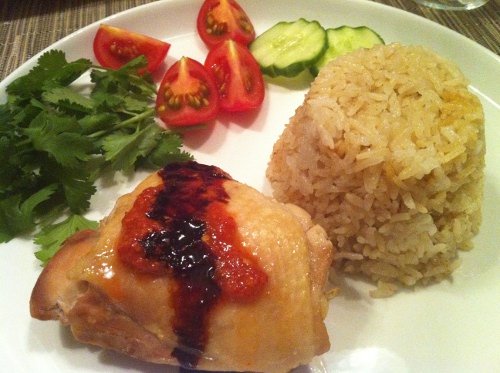 Have you ever had Hainanese Chicken Rice?