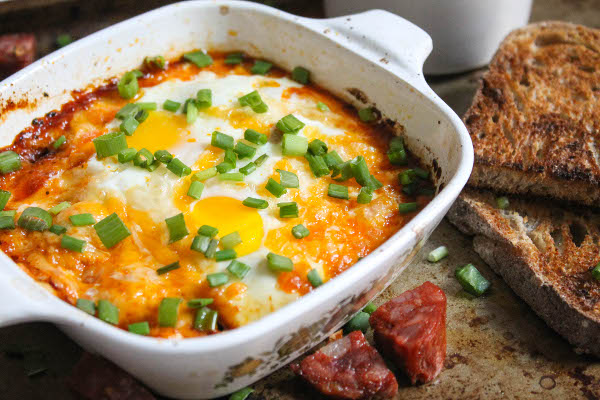 It’s about this time of year when the wanderlust hits me.

Around this time, I would’ve settled in nicely into the new year, celebrated my birthday, and now start to crave for travel adventures. Last year, I did most of my travelling in the first few months of the year (going to Kyoto, Tokyo, Hudson Valley, and Seattle) and I want to spread it out a little bit more in 2015. I’ve already made plans to go to Vermont this weekend and Montreal in a few months, but what I’m really craving for – a deep, insatiable longing – is to go back to Spain. And maybe a side trip to Portugal?

I’ve started talking to my favorite travel buddy, my sister, friends, anyone! Anyone who wants to join me on this Spain-Portugal trip. I’ll do all the research, the reservations, and as you would probably expect, I’ll make sure that the trip will be a culinary journey. While I’m still figuring out how I can afford a European jaunt, I’m satisfying this craving with Spanish and Portuguese food. 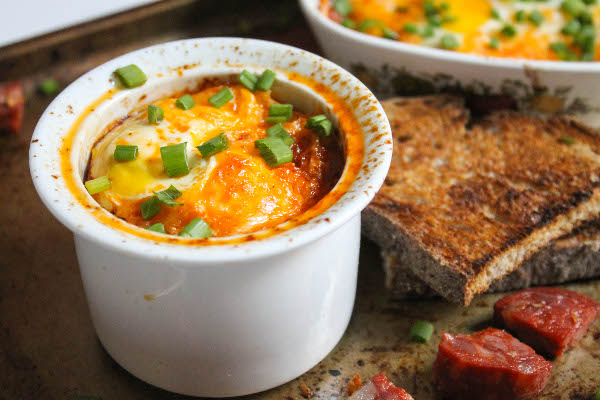 These spicy Baked Eggs with Chorizo do just the trick. It reminds me of the savory delicacies I enjoyed in Spain a couple of years ago, but it also reminds me of food from my home, the Philippines. Some of you many not be aware of this, but the Philippines was a colony of Spain for over 300 years. Filipino food and culture are both largely influenced by the Spanish, with a mix of Chinese and Malay sprinkled in. Spanish chorizo is a common ingredient back home (where it is just called chorizo – there is also a local sausage called longganisa with tastes similar), often served with rice, in sandwiches, as appetizers, with pasta, etc. 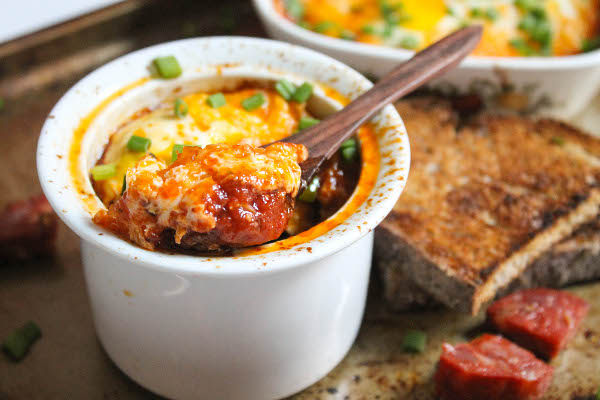 Baked eggs in tomato sauce in common in Spanish and Portuguese cuisine. I added chorizo because I love it. And I knew that the meaty, garlicky flavor would make these eggs extra special. Served with warm and buttered crunchy toast, this made for a very satisfying weekend brunch. It tastes decadent and just exotic enough, but actually really easy to make. My tomato sauce was already prepared – I just used a bottled jar of marinara sauce from my favorite gourmet shop. You can use your favorite recipe of course, but it doesn’t make much of a difference in taste to me because I doctor up jarred sauce with garlic and red chili pepper flakes. I like things muy caliente!

Take note that Spanish chorizo is different from Mexican chorizo. Spanish chorizo is a dried and cured sausage, already cooked and ready to eat. It’s often sold beside salami and pepperoni in grocery stores. Mexican chorizo is more crumbly and still needs to be cooked. It’s usually found beside other raw meats, like bacon and ground meat. (Here’s more from The Kitchn.) Think of the sliced chorizo served in oily, garlicky tapas and the ground chorizo used in breakfast tacos – they’re two very different things. Both are delicious, but this recipe calls for Spanish chorizo. 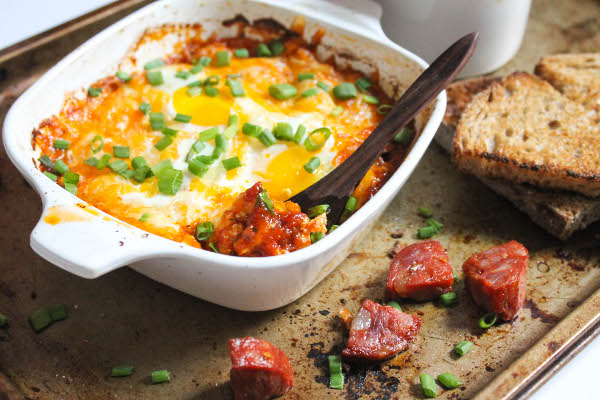 This is a warm and filling dish, aromatic and spicy. You can omit the chili pepper flakes if you don’t like too much heat, but I like the kick of spice. Bake the eggs for a few minutes less if you like runny yolks. I usually do, but I was distracted thinking about vacation. 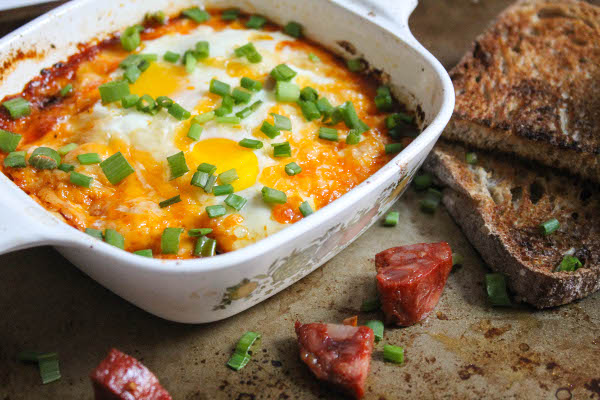 I may not have a plane ticket yet, but for now, I’m happy with my little taste of Spain and Portugal.

27 Responses to “Baked Eggs with Chorizo”