Things I used to hate but now… well, I still don’t like eating them: olives, fruit on meat, mussels.

My taste in food have developed and changed over the years, and I’m glad that I can now appreciate things that I used to avoid or toss aside or fastidiously pick from my plate. Like bell peppers. 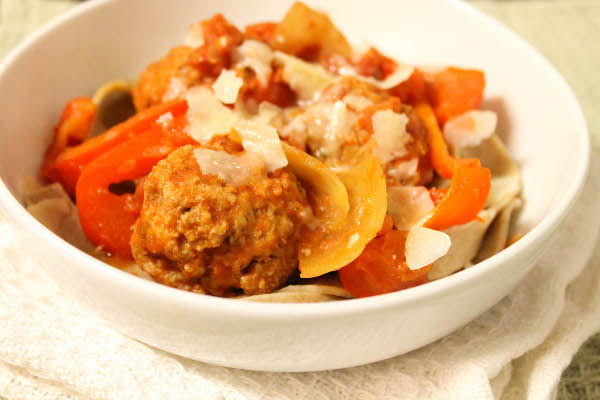 I really, really like hot peppers (habaneros, jalapenos, even ghost peppers), but I used to loathe bell peppers. And yet somehow, my aversion to bell peppers have diminished during the last few years. I started eating it on pizzas, with salads, in dips. I realized I actually like them roasted, too.  So I was excited when I received my “assignment” for The Bitten Word’s Super Awesome Cover to Cover Challenge, where Zach and Clay and hundreds of participants are cooking every recipe in six issues of their favorite October food magazines. I ended up in Team Everyday Food, and my dish was Sausage and Pepper Meatballs.

It’s a riff on the flavors of a sausage and peppers sub, a hoagie, so one of the main ingredients is red bell peppers. 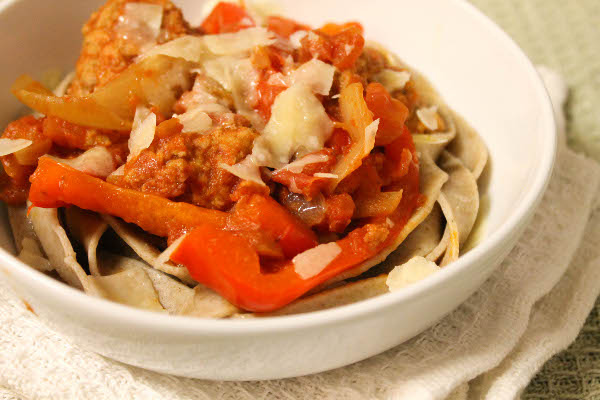 I admit that if this happened a few years ago, that I might have asked to swap my dish. But now, I welcomed the opportunity to cook with bell peppers. Besides, it’s a Martha Stewart recipe. And while I may not always succeed in recreating her dishes, I’ve had plenty of delicious meals inspired by her recipes. And these are meatballs – one of my favorite things, ever.

I decided to use actual Italian sausage, which I combined with ground pork (instead of just ground pork and fennel seeds that the recipe originally called for) and I served it with a multi-grain fettuccini from one of my favored farmer’s market vendors.

You probably won’t be surprised when I say that the meatballs turned out delicious. The bell peppers and onions (another thing I used to hate, see above) lend a sweet layer of flavor, and the Italian sausage and red pepper flakes balance it out with some spice.

Cook pasta according to package directions.

In a large heavy pot (I used my dutch oven), heat oil over medium-high. Add onion and cook, stirring, until translucent for about 5 minutes. Remove 1/3 cup of the onions and transfer to a cutting board. Add bell pepper to remaining onion and cook, stirring occasionally, until bell pepper is softened, about 8 minutes, Add 1/4 cup water to the pot, scraping up browned bits with a wooden spoon. Add crushed tomatoes and red pepper flakes and bring to a gentle simmer.

Make meatballs. In a large bowl, combine breadcrumbs, milk, and salt. Roughly chop reserved onion and add to bowl, along with pork and Italian sausage. Stir until just combined. Form 2-inch balls and drop gently into sauce, trying to submerge all meatballs. Cover and simmer until cooked through, about 12-15 minutes. Serve on top with pasta and sprinkle with shaved Parmesan. 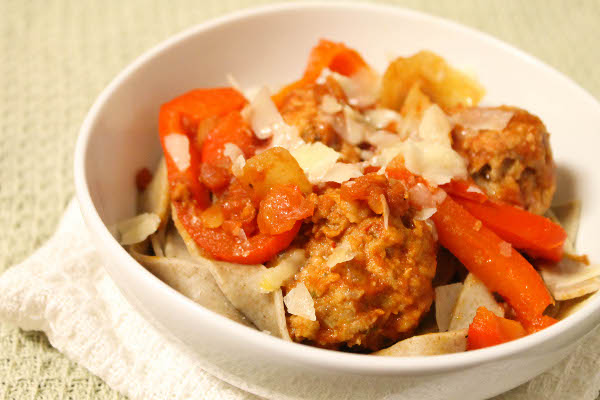 Has your taste changed over the years, too? What’s one thing you used to hate but now actually like?

« Previous
Tiramisu
Next »
Smoked Gouda and Pumpkin Mac and Cheese

29 Responses to “Sausage and Pepper Meatballs”