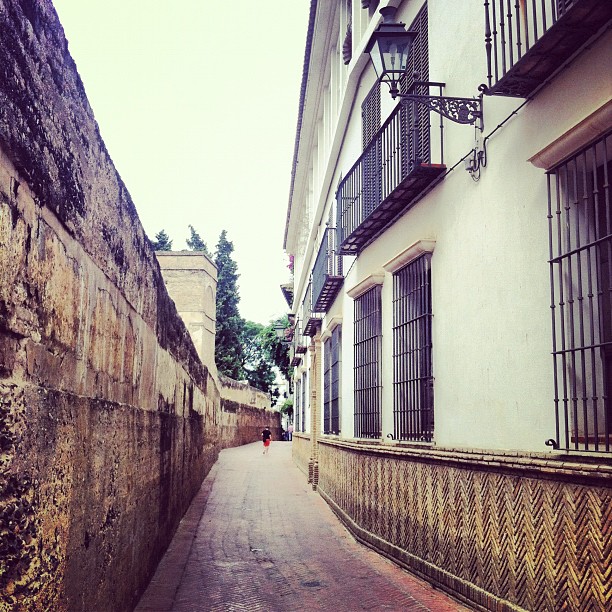 I have been “warned” by a couple of friends that as soon as I see Seville, I might fall in love with it and want to move there. Those are big words, and now I understand why. I loved the charm of the old city, the allure of the castles and other stately buildings, the siren song of the food, and the abundance of drinks. But, admittedly it was not Seville that I fell in love with, it was Madrid. That is not to say though that Sevilla was not a contender!

It was, after all, the city that introduced me to my favorite dessert while on vacation (surprise: it’s not churros*).

On the first day of our Andalucian tour, we left Madrid in the morning to head over to Seville. But before we arrived in Seville, we passed by Cordoba. And on the way to Cordoba, we stopped by La Mancha.

La Mancha is the land of Don Quixote, the character in the novel written by Miguel de Cervantes about a man who loves reading stories about chivalry, knights, castles, jousts, and medieval romances, and who eventually outfits himself as a knight in armor and sets out to revive chivalry.

La Mancha was our first glimpse into our 5-day adventure. But while it was pretty, it was also empty. Cordoba, on the other hand, was busy with locals and tourists. We went on a city tour of Cordoba, where we visited the Jewish Quarters and admired its white-washed walls. We also entered the Great Mosque, a site that was originally a pagan temple, that was turned into a mosque by the Moors, but is now a Roman Catholic church. 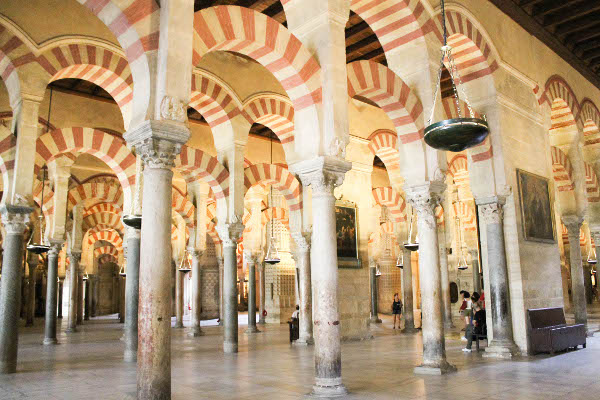 The mosque was magnificent, with red and cream double arches, and massive columns of marble, jasper, onyx, and granite.

(If you’re thinking, that’s nice, Bianca, but where is the dessert? Relax, we haven’t gotten to Seville yet.)

In the afternoon, we left Cordoba and continued on our way, finally arriving at Sevilla. Seville is known for a lot of things: the orange trees lining the streets, the Gothic cathedral, the majestic Plaza de Espana, flamenco, and the food scene: 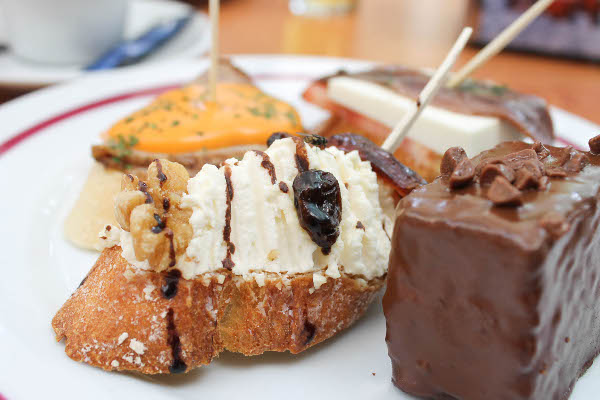 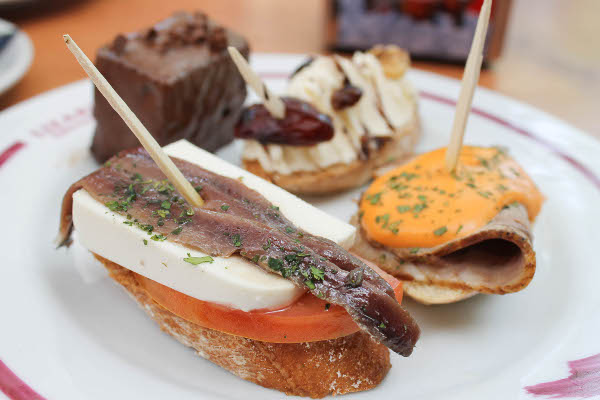 Remember when I said that pintxo literally means skewer? This is how traditional pintxos look like, and they were selling for just one euro each. I got: 1) toast with a ricotta-like cheese, drizzled with dark chocolate and topped with walnuts, raisins, and dates, 2) a bite-sized chocolate cake, 3) roast beef with cheese sauce, and 4) a caprese-like pintxo with anchovies. I’ve made no secret about my adoration for these salty little suckers, and I am glad that I’ve had my fair share of anchovies in Spain. 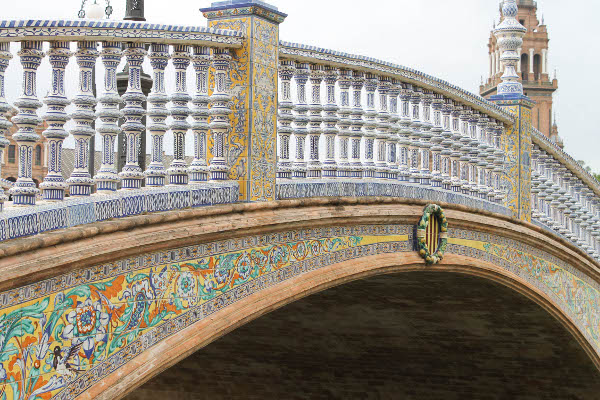 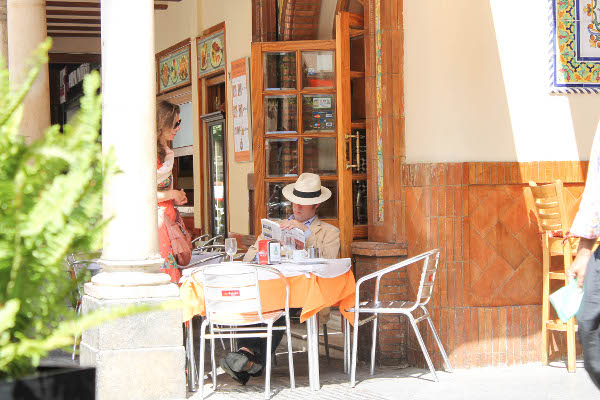 We spent the rest of our time in Seville checking out Plaza Espana, and then going into the old city to visit the gardens and the cathedral. We also squeezed in some time to creep on dapper-looking Spanish men (full disclosure: it was my friend Fe’s idea).

We ate well in Seville, and my favorite meal was at a restaurant called Gusto Ristobar. We went in for a late lunch and the food was very simple, but we relished every bite. 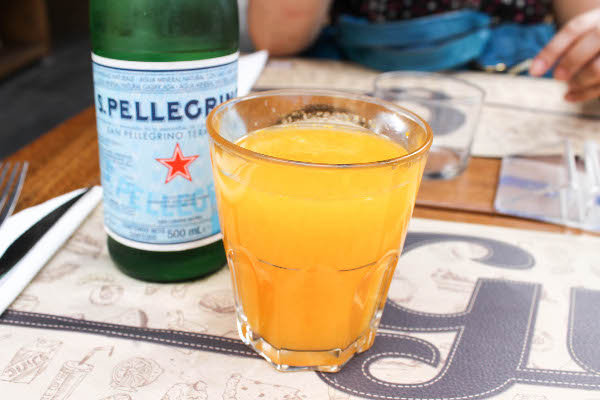 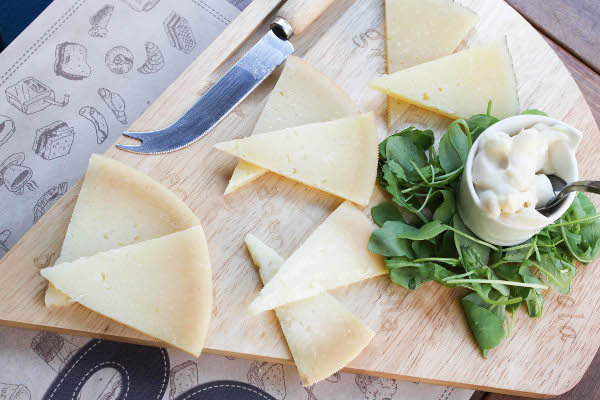 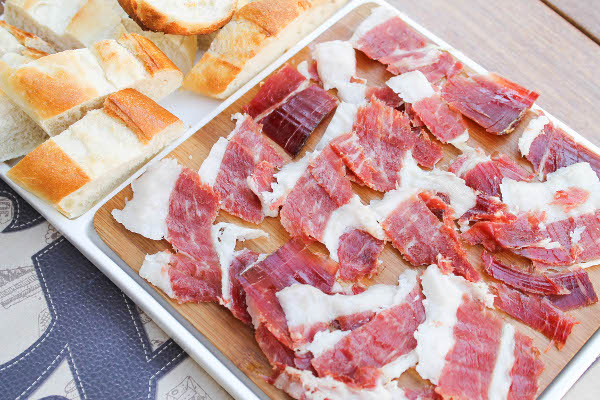 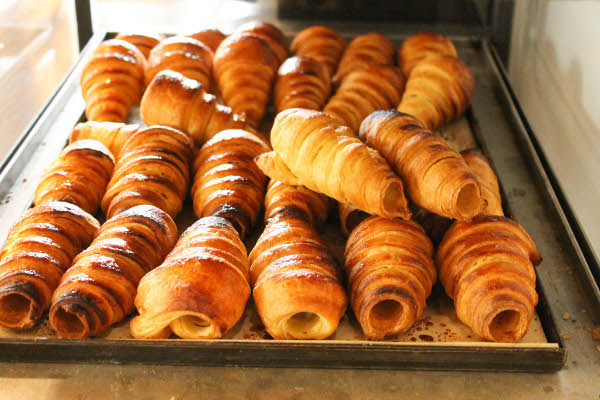 The restaurant had different kinds of fresh pastries, but I opted to go for something colder: 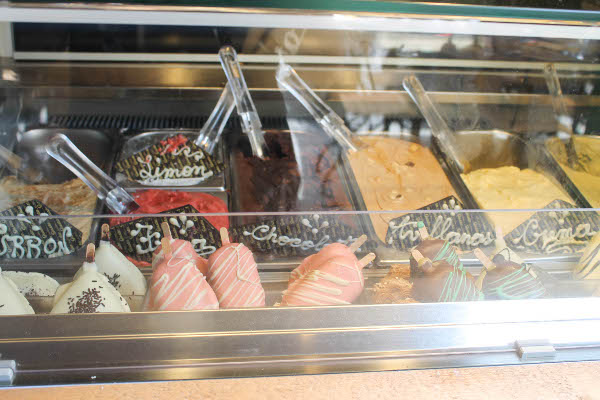 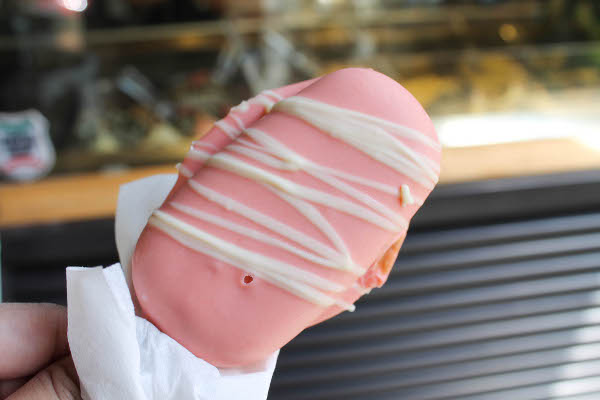 And this, my friends, was my favorite dessert during my vacation. I actually didn’t know what it was at first, all I knew was that it was pink and it was in the ice cream section. It turned out to be hazelnut gelato covered in white chocolate.

*I don’t really consider churros as dessert.  It is traditionally breakfast fare, or merienda (snack). But best of all, in Madrid, churros were a glorious post-drinking, midnight-or-later treat.

After leaving Seville and visiting other cities, I tried looking for this frozen treat but didn’t have any luck. I thought about moving to Seville for it, but I figured I should have more reasons to move to a new city than just one dessert.